by Dr. Elizabeth Mitchell on May 30, 2013
Share:
Email Using:
Gmail Yahoo! Outlook Other

Clones created to die . . . and other ethical conundrums. 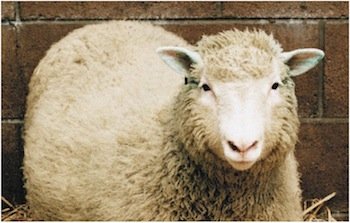 Human clones? Shoukhrat Mitalipov’s group at Oregon Health & Science University reports it has finally achieved the elusive goal of producing human embryos through cloning. The accomplishment raises ethical questions. Is it right to create human embryos in order to harvest their stem cells? Are human embryos created through cloning less human than those produced through the union of sperm and egg? Would human beings born as a result of cloning be fully human?

When Dolly the cloned sheep was born back in 1997, the possibility of cloning human beings became an imminent ethical concern for some and an attainable goal to others. Despite the variety of animals successfully cloned, human embryos proved trickier to create. Nine years ago South Korean researchers fraudulently claimed they had succeeded. Some suspected human cloning was not possible, but others realized that the biological method that worked for sheep should work for humans, given the right variations.

Using the same method that worked to produce Dolly, Mitalipov’s group produced several human embryos that continued to develop long enough to produce embryonic stem cells. Commenting on the discovery, University of Pennsylvania stem cell pioneer John Gearhart said, “It’s been a holy grail that we’ve been after for years.”

Some—including Mitalipov—have suggested that human embryos produced through cloning are an ethics-free source of embryonic stem cells. Their reasoning:

But do these facts negate the human-ness of the embryos?

Each clone was produced by replacing a human egg’s nucleus with the DNA-containing nucleus of a skin cell from the person to be cloned. This is called somatic cell nuclear transfer. The resulting cell was then stimulated to become an embryo. The successful clones developed to the embryonic stage known as a blastocyst. The cells that form the placental attachment to a mother did not develop properly, but the cells that normally develop into the human body (the inner cell mass) did. These embryos were genetically identical to the person being cloned—in essence, identical twins.

Did these “twins” have the same human standing as the human from whom they were cloned? Did the fact they had a handicap affecting their ability to implant in a woman’s uterus make them less human? Did the fact they originated in a laboratory without sperm make them less than human? When the embryos were killed by harvesting their stem cells, were human lives destroyed?

Human life begins when a cell with a human genome, equipped to grow as an embryo, is created. Even though Mitalipov’s embryos did not originate from the union of a sperm and egg, their development into blastocysts demonstrated they were true embryos. 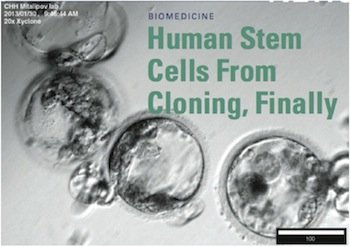 The title of this article in Science reflects the delight of researchers who have at last produced authentic human embryos through cloning. Some think these embryos will provide a source for embryonic stem cells untroubled by ethical concerns. But is that really true? The cloned embryos are genetically identical to the person who was cloned, like identical twins. If a twin is no less human than his counterpart, why should a clone be less human than his counterpart?  Image: Gretchen Vogel, “Human Stem Cells From Cloning, Finally,” Science 340:795 (17 May 2013). 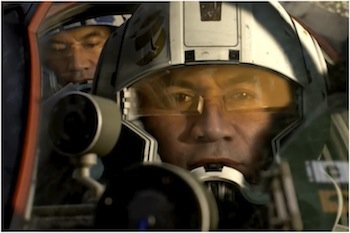 The faces of fictional clones as seen in Star Wars: Revenge of the Sith could people our future. While reproductive cloning has not yet produced human babies, the latest breakthrough suggests they could in the future. Why would anyone want to produce human babies by cloning? The clones in the movie were created to be exploited. In real life, human clones have already been deprived of their full status as human beings by being exploited and senselessly destroyed for stem cells that can be obtained through less controversial means. There is a danger that they could be further exploited as marketable commodities and deprived of their human rights at later and later stages of life. Image: screen shot from George Lucas’s film Star Wars: Revenge of the Sith produced by LucasFilm Ltd.

“This is a case in which one is deliberately setting out to create a human being for the sole purpose of destroying that human being,” comments University of Chicago bioethicist and professor of medicine Dr. Daniel Sulmasy. “I'm of the school that thinks that that's morally wrong no matter how much good could come of it.”

The ethical problems of embryonic clones extend to the ethical treatment of future fetal clones, baby clones, and adult clones that will very likely result if this sort of research continues. Sulmasy says, “This raises serious problems because it is the first actual human cloning. We already know there are people out there who are itching to be able to be the first to bring a cloned human being to birth. And I think it's going to happen.” 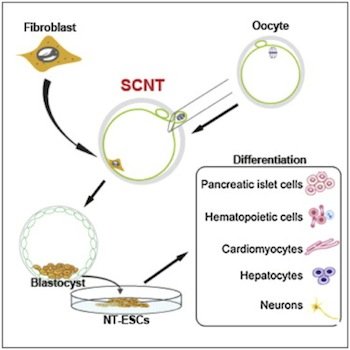 The making of a human clone starts with a human egg (oocyte) and an ordinary cell (like a fibroblast) from the person to be cloned. Somatic cell nuclear transfer (SCNT) involves replacing the egg’s DNA with the DNA from the person’s cell. The fused cell is then stimulated to become an embryo, pictured here at the blastocyst stage of development. Embryonic stem cells (NT-ESCs) are then harvested. Stem cells can differentiate into a variety of cell types potentially useful for treating medical problems. (Induced pluripotent stem cells (iPSCs), which can be produced without an embryo, serve the same purpose.) Image: Cell, www.cell.com

Because of the concerns for the human rights of people that may be produced through cloning, the United Nations,1 the European Union, some countries, and some U.S. states have opposed human cloning. Given the sub-human legal status accorded to pre-born children in most countries, the specter of fetal farming—growing cloned fetuses for spare parts genetically matched to those rich enough to pay for them—looms in our future. Yet harvesting stem cells from an embryo should be as abhorrent to our moral sensibilities as harvesting organs from a fetus.

The fact that even the United Nations is concerned about the proper treatment of cloned people attests to the essential human-ness of these cloned embryos. Human embryos created through cloning are just as human as those produced by the union of sperm and egg through natural reproduction or in vitro fertilization (IVF). God created human beings in His own image (Genesis 1:27). Every person starts life as a human embryo. And human beings, even IVF surplus and clones created to die, are human lives precious in the sight of God (Psalm 139:13–15; Psalm 51:5; Jeremiah 1:5). Creating them to to be killed is wrong.

Check back on Wednesday for an in-depth illustrated discussion of this landmark research and a more detailed analysis of the ethical issues involved.