Can the Cheetah Out-Run Extinction?

Can the world’s fastest cat win its race against the threat of extinction?

Even cheetah supermoms may not be able to rescue the world’s dwindling cheetah populations. International Cheetah Day—December 4—was the second annual reminder of the unfortunate impact several thousand years of history have had on wild cheetah populations. Fewer than 10,000 cheetahs are currently thought to survive in the wild,1 and only 76 wild Asiatic cheetahs are known to still roam the mountains of Iran.

Built for speed, the cheetah is the fastest land animal. Thanks to new photographic techniques, the cheetah’s sinewy strength and sleek muscular body have now been clearly captured on film. Seeing this masterpiece of God’s design in action, learning how cheetah supermoms are keeping their shrinking numbers alive, and understanding the creative efforts being developed to protect wild cheetahs should prompt us to applaud efforts to preserve this endangered animal.

A team uniting the efforts of a Hollywood action film crew with the resources of the Cincinnati Zoo and National Geographic captured this amazingly detailed, clear footage. “Running cheetahs have been photographed using high-speed cameras,” said photo editor Kim Hubbard. “But never has one been filmed with a high-speed camera moving alongside it at 50 or 60 miles an hour.” The crew used a high definition camera speeding on a sled down a 400 foot track filming at 1200 frames per second while remaining in sync with and zooming in on the five cheetahs living at the Cincinnati Zoo. The results, seamlessly combining views from several cameras, is a “must-see” at newswatch.NationalGeographic.com. 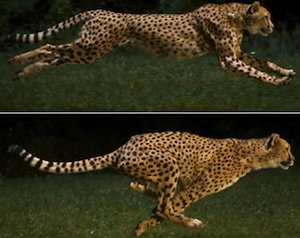 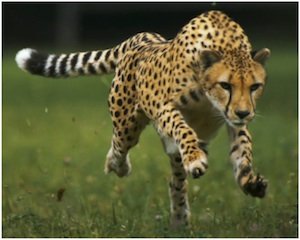 These images from the groundbreaking video filmed by National Geographic and the Cincinnati Zoo hint at the anatomical features that make the cheetah the fastest land animal. In every way designed for speed, cheetahs can accelerate faster than a sports car. “I’ve watched cheetahs run for 30 years,” says Cathryn Hilker, founder of the zoo’s Cat Ambassador Program. “But I saw things in that super slow-motion video that I’ve never seen before.” The must-watch seven-minute film from which these still shots were taken compiles three days’ footage of the five cheetahs at the Cincinnati Zoo—Sarah, Nia, Chance, Bravo, and Tommy T. Coupled with relaxing music, this film is a pleasure to watch. See it at newswatch.nationalgeographic.com/2012/11/20/beauty-of-the-beast Image credit: “Cheetah’s on the Edge—Director’s Cut” by Gregory Wilson for National Geographic Magazine, newswatch.NationalGeographic.com.

Cheetahs are designed for explosive speed. Their spines are flexible, their legs are long, and the unique semi-retractable claws on their feet are perfectly suited for gaining traction.

One cheetah—Sarah—broke the world’s record for the standing 100 meter dash during the filming, with a time of 5.95 seconds. She often outran the sled. Cheetahs are designed for explosive speed. Their spines are flexible, their legs are long, and the unique semi-retractable claws on their feet are perfectly suited for gaining traction. The result is a sprinting cheetah with a quicker take-off speed than a fine sports car. The cheetah can cover over 25 feet with each bound and repeat that stretch up to four times a second.

Shifting our attention from Cincinnati to Tanzania’s Serengeti National Park and Kenya’s Masai Mara National Reserve, we can see that cheetahs, the world’s fastest cats, are outnumbered there by lions about 10 to 1 and by leopards more than 3 to 1. Infant mortality of cheetahs is high, and many females never succeed in raising cubs. In the Serengeti, several rare “supermoms” have been chronicled over the past 38 years for their remarkable reproductive success. They often simultaneously carry young fathered by multiple males—multiple mating being a way to maintain genetic diversity despite shrinking numbers.2 Some have raised cubs belonging to other females, and supermoms seem particularly successful at not only feeding their cubs with daily kills but also protecting them from the ever-present hyenas. Serengeti Cheetah Project’s Sarah Durant says, “I’m not aware of any other carnivore whose survival relies so heavily on the success of so few females.”

Competition from hyenas and other cats isn’t the cheetah’s only problem, though. In addition to the perennial problems of habitat destruction, heavy hunting for sport, and destruction due to concern for domestic animal populations, these animals have historically been too intriguing and popular for their own good. Tamed by Egyptians thousands of years ago, cheetahs became immensely popular as “hunting leopards” for the aristocracy in India, Iran, and Arabia. One Mogul emperor is said to have collected over 9,000 cheetahs. Now, those rare Asiatic cheetahs survive in the mountains of Iran but are seldom seen. Identifiable by their unique spot patterns, only 76 have been documented there in recent years, using hidden cameras.

The unfortunate popularity of cheetahs as exotic pets of the rich continues today, and lucrative illegal trafficking is thought to be a major threat to the dwindling number of cheetahs remaining in the wild. The Cheetah Conservation Fund, in addition to calling attention to the problem of poaching, has developed creative positive solutions that help humans and improve the quality of habitat remaining for the animals. They have encouraged Namibian farmers, for instance, to use specially bred livestock guard dogs that reduce predation by 80%, instead of shooting cheetahs.3

Evolutionists, based on unverifiable worldview-based assumptions, believe cheetahs evolved about 3 million years ago. Biblically, however, we know that despite the genetic bottleneck experienced by the cat population at the time of the global Flood, all the sorts of cats in the world today are variations of those on the Ark.

Researchers are attempting to determine how many created kinds of animals would have been represented on the Ark. They have recently published their initial results at Determining the Ark Kinds and Mammalian Ark Kinds. The numbers are even lower than previous estimates. Each kind of animal possesses a remarkable potential for variation within its kind. Evolutionists often publish reports about “rapid evolution in action,” but these reports are invariably based on observable rapid variation (diversification) within created kinds. These reports are reminders of the biblical truth that indicates the biodiversity we see in animals today developed in only a few thousand years.

The cheetah is an example of the diversity that has developed among cats since the cats with Noah disembarked from the Ark less than 4,500 years ago. We must hope that conservation efforts and the natural proclivities of supermoms succeed in preserving this endangered cat variety.