King cheetahs, rare cheetahs with a blotched color pattern, were once thought to be a separate species from their spotted cheetah counterparts. And while the evenly striped “mackerel” pattern of domestic tabby cats is among the most common coat around, a blotchy tabby pattern with wider, more irregular whorls predates the establishment of modern domestic breeds. Mackerel tabby markings appear in medieval art, but the taxonomist Linnaeus documented the blotched tabby as a common domestic variation in 1758. A study just published in Science1 reveals the genetic basis for these heritable variations. Tracing the Tabby gene ties the tiger and even “king cheetah” to the kitty in your lap.

The color of individual cat hairs is regulated by a locally acting hormone that regulates each hair follicle’s melanin production.

The color of individual cat hairs is regulated by a locally acting hormone that regulates each hair follicle’s melanin production. However, that hormonal switch is regulated by the gene (Edn3). And Edn3 only implements instructions from another gene that sets the tabby pattern. Researchers tracked the genetic difference between mackerel and blotched tabby patterns to a single gene locus, which they appropriately nicknamed Tabby.2 Because the pattern is pre-set in the genome and then regulated follicle by follicle, the pattern in a cat never changes.

This mackerel tabby pattern is produced by the dominant form of the Tabby gene. This cat could therefore be TaM/TaM or TaM/Tab. Image by Helmi Flick, via Science.3

This blotched (also known as “classic”) tabby pattern requires the cat be homozygous for the recessive form of the Tabby gene. This tabby is Tab/Tab. Image by Helmi Flick, via Science.4 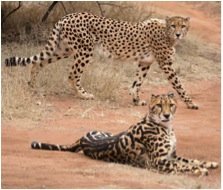 The top cheetah’s spotted pattern is dictated by the dominant form of the Tabby gene. This cheetah could therefore be TaM/TaM or TaM/Tab. The bottom cat is a king cheetah. The exotic blotches and the characteristic wide black stripes on its back result from the recessive form of the Tabby gene. The king cheetah is Tab/Tab. Image by Greg Barsh/Ann va Dyk Cheetah Preserve, via Science.5

The black-footed cat, Felis nigripes, native to southern Africa, is the smallest African cat. Males average around four pounds and females only about three pounds. Its name comes from the black undersides of its feet.6 While exhibiting a number of genetic differences from other cats in the study, it has the same mutation of the Tabby gene as domestic cats with an atypical swirled coat pattern. This particular mutation is not expressed as reproducibly as the blotched mutation. Image by Pierre de Chabannes, via Wikimedia Commons.

Wild or domestic, tabby cats with a blotched pattern are homozygous for a recessive form of the Tabby gene. The mackerel pattern is dictated by a dominant form of the Tabby gene. Carrying their investigation further, the researchers found that Tabby regulates tiger stripes, cheetah spots, and even the odd pattern of the southern African black-footed cat. The exotic and rare king cheetah (see photo) with dark whorls of coalescing spots and wide black stripes on its back is actually just the blotched tabby variation. Wild king cheetahs are native to a small region of sub-Saharan Africa, and those sampled are in captivity. The blotched variation, based on analysis of the genomes and pedigrees of these king cheetahs, suggests the mutant blotched form entered that population through one homozygous and two heterozygous animals.

Though the researchers speak of the evolution of cat color, no evolution of new kinds is evidenced here. Instead, we see the researchers tracing the connections between varieties of cats. Dramatic differences here are traceable to variations in a single gene. God created all kinds of land animals on the 6th day of creation week about 6,000 years ago. He put the potential for great variety in the original created kinds. All the cat varieties we see today are descended and diversified from the cats on the Ark with Noah. The effect of this single mutation within different varieties of cats highlights the enormous difference a small genetic change can make. Yet that change does not introduce the raw material for evolution of a non-cat.