Who left their handprints in northern Spain?

Cave art in Spain is changing the way evolutionary anthropologists see Neanderthals and early modern humans. But which early Europeans get credit for the oldest known art in Europe is still up for grabs. The answer, in the minds of evolutionary anthropologists, depends on the dates for when Neanderthals and early modern humans lived, and dates newly assigned to the paintings.

Dr. Alistair Pike and colleagues report they have uranium-series-dated cave paintings in 11 caves in northern Spain and discovered the oldest known cave art in Europe. Their report follows close on the heels of an announcement that artwork in southern Spain is suspected of being equally ancient. Although the southern cave art—drawings of seals—awaits more definitive dating, radiocarbon analyses of charcoal found alongside it yielded dates of 43,500 to 42,300 years.1 Carbon-14 dating of the red handprints and red dots from northern Spain has produced dates clustering around 35,000 years in some of the caves.2

Carbon-14 dating of cave art is problematic, however. Only organic pigments can be carbon-14 dated. Only small samples can be taken without damaging the artwork. And small sample size often results in inconsistent and possibly contaminated results.3 The previous record-holder for European cave art was found by Jean-Marie Chauvet in 1994 in France. The 30,000 year carbon-14 date for paintings of bears in that French cave has been highly disputed.4

In a new approach to dating cave art, uranium-series isotope ratios were measured in tiny bits of calcite flowstone stuck to the painted surfaces. Because the paintings underneath had to be made prior to the formation of the flowstone adhering to them, the uranium-series method—if reliable—would establish a minimum age for the paintings.5 Using the uranium-series method in this way to date the flowstone stuck to paintings in the caves in northern Spain, Dr. Alistair Pike’s team reports that some artwork is at least 40,800 years old. Investigators found a range of dates spanning about 20,000 years, but those ages represent only the “minimum ages” for the paintings as the flowstone deposits could have formed anytime after the paintings were made. Similarity of artistic style in the red handprints, red stippled shapes, and other red motifs suggest the same cultural group made them. But which culture? 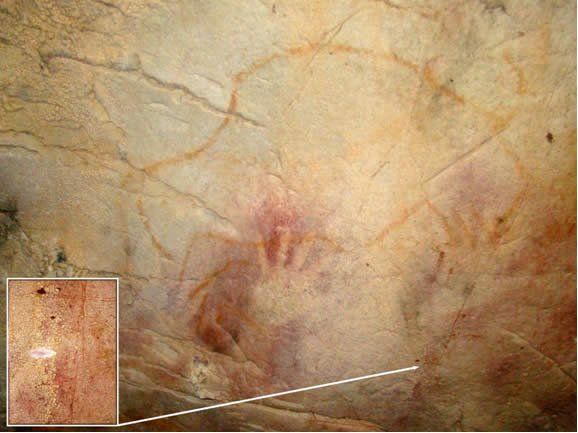 The sample known as O-83 was taken from the flowstone deposited over a large red stippled disk in El Castillo Cave. With a minimum uranium-series-dated age of 40,800 years, Dr. Pike considers O-83 “the oldest known cave art in Europe.”6 The minimum age measured from the calcite deposit over the adjacent handprint was 37,300 years. The similarity of style in over 50 motifs suggests they are contemporary. The yellow bison is superimposed atop the others and was added later. Image from supplementary material available at http://www.sciencemag.org/content/suppl/2012/06/13/336.6087.1409.DC1.html

Hand prints and stippled disks on cave walls in northern Spain could have been made by Neanderthals or early modern humans. Image from http://uk.news.yahoo.com/palaeolithic-paintings--europe-s-oldest-cave-artwork-discovered.html

“We see evidence for earlier human symbolism in the form of perforated beads, engraved egg shells and pigments in Africa 70-100,000 years ago,” Pike says, ‘but it appears that the earliest cave paintings are in Europe.”

Our results show that either modern humans arrived with painting already part of their cultural activity or it developed very shortly after.

“Evidence for modern humans in Northern Spain dates back to 41,500 years ago, and before them were Neanderthals,” Pike explains. “Our results show that either modern humans arrived with painting already part of their cultural activity or it developed very shortly after . . . or perhaps the art is Neanderthal art. . . . That would be a fantastic find as it would mean the hand stencils on the walls of the caves are outlines of Neanderthals' hands, but we will need to date more examples to see if this is the case.”

While Neanderthal artifacts found elsewhere have included jewelry, pigments, and tools for applying pigments, no confirmed cave paintings have been found.7 Many evolutionary anthropologists have resisted the notion that Neanderthals possessed complex language or the capacity for abstract thought. Therefore, if these paintings come to be accepted as the work of Neanderthals, the brutish Neanderthal reputation may get an upgrade.

Evolutionary anthropologist Chris Stringer of London’s Natural History Museum recently described the importance of dates to the human evolutionary story. He said, in connection with the La Sima fossils in northern Spain’s Atapuerca cavern system, “If we cannot correctly fix the age and identity of the remains then we are in trouble. Getting that wrong even affects how we construct our own evolution.”8 These cave paintings are not accompanied by fossils, so, from the perspective of evolutionary anthropology, the dates must determine who could have made the pictures. 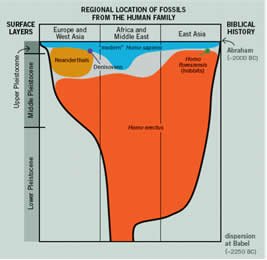 This illustration shows how some of the human fossils found in Ice Age sediments fit into the biblical timeline. Whether Neanderthal or Homo heidelbergensis, the people buried at La Sima were descendants of Noah’s family who arrived in Europe sometime after the dispersion from Babel. Homo heidelbergensis, not pictured on this diagram, are found in the Middle Pleistocene. Illustration from Answers magazine part of a feature complete with helpful diagrams explaining how “cavemen” can be explained within the biblical timeline. See them all in the special feature: “Finding a Home for Cavemen: Who were they?, When did they live?, How are they different?”

All human beings since the time of the global Flood—including all the humans buried and fossilized during the Ice Age in Pleistocene layers—were descended from Noah’s family. The group of humans we know as Neanderthals apparently died off by the end of the Ice Age. There is no reason to suspect they were some lower form of brute just because they apparently left us no writing or cleverly designed artifacts. We know from Scripture that they did possess language because God had confused the language of the people who were building the Tower of Babel, forcing different language groups to separate. (Genesis 11:6–8). Neanderthals were descendants of one of those groups dispersed from Babel.

We, like Dr. Pike, are excited about the possibility that these handprints may have been made by Neanderthals, though not to sort out our evolutionary past. If the handprints are Neanderthal, then—like their graves, jewelry, tools, and pigment kits—the prints serve as a reminder that people, despite superficial differences, are all descended from the first Adam. Thus, we are all more alike than different and all answerable to our Creator God who, according to Acts 17:24–31, “has made from one blood every nation of men to dwell on all the face of the earth, and has determined their preappointed times and the boundaries of their dwellings, so that they should seek the Lord, in the hope that they might grope for Him and find Him, though He is not far from each one of us.”

People like Neanderthals and early modern humans dispersing from Babel (at God’s “insistence”) were replenishing the earth just a few hundred years after the judgment of the global Flood. But God’s plan for humanity didn’t end with man’s rebellion and God’s judgment. All along, God had plans to send Jesus Christ into the world as Savior, a blessing to all people.