Pollinating bees prefer the same colors on any continent.

Bees tend to prefer certain flower colors. According to bee expert Adrian Dyer and colleagues from Australia’s Monash University, bee color perception drove the evolution of flower color to be the same worldwide. As a result, the flower petal colors in Australia and Europe look the same to bees.

“Australia’s long-term isolation [34 million years by evolutionary reckoning] means that species of plants here and in Europe independently evolved to have similarly colored petals,” says Dyer. “Our research shows that the common factor here is the known color vision discrimination abilities of bees. The plants have, over time, developed petals that will attract bees to act as pollinators.”

Bees prefer what they can distinguish best. They are able to see ultraviolet light and a limited part of our visible spectrum. “Bees have trichromatic vision based on ultraviolet, blue and green photoreceptors, so what they see is very different from what we see.” Dyer explains. “However, bees from around the world all appear to have very similar color vision.”

So which came first, bee color perception or petal color? In the evolutionary scenario, it was bee color perception. Dyer says, “Previous research has determined that color vision present in modern bees actually evolved before angiosperms, meaning the plants probably adapted their flower color to take advantage of pre-existing conditions.” 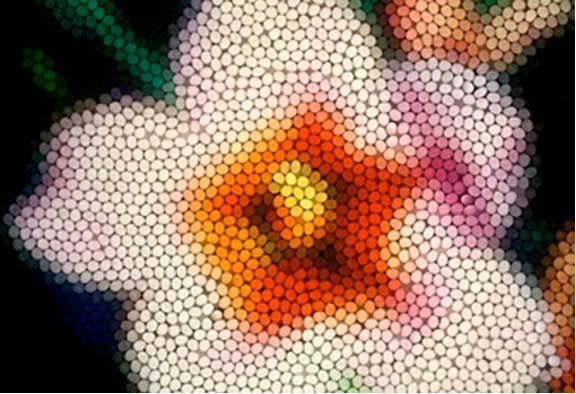 Bees’ eyes are equipped with different kinds of receptors than humans. This is a reconstruction of how a bee would see a yellow flower. Reproduced from Monash University.

The research demonstrating that bee color vision evolved prior to flower colors is described in Chittka’s 1996 study, “Does Bee Color Vision Predate the Evolution of Flower Color?” Those familiar with order in the fossil record can probably predict the answer. Chittka reported that many insects and crustaceans possess various combinations of the receptors seen in bees. Therefore, Chittka writes, “we can infer that the Cambrian ancestors of extant insects and crustaceans possessed UV, blue, and green receptors. . . . Hence, insects were well preadapted for flower color coding more than 500 Ma [million years] ago, about 400 Ma [million years] before the extensive radiation of the angiosperm [flowering] plants which started in the middle Cretaceous (100 Ma ago), although the origin of the angiosperms might have to be placed in the Triassic.”1

Because evolutionists interpret the fossil record in light of their unverifiable presupposition that molecules-to-man evolution occurred over billions of years, they believe being buried deeper proves an organism evolved before another organism. And because they believe organisms diverged from common ancestors, they believe shared traits (such as color receptors) present in living organisms were once found in their earliest common ancestors. In this case, that means bee ancestors evolved their particular kind of color vision during the Cambrian explosion. And it means that when flowers eventually evolved, only those with the right colors to be distinguishable and appealing to ancestral pollinators survived, being naturally selected by the insects. The current study simply asserts that the long evolutionary history of bee vision guided the evolution of flower color the same way on continents long separated, with the presence of bees on those continents already established before the separation.

Furthermore, organisms vary within their created kinds and do not evolve into new kinds.

When we view the fossil record in light of biblical history, however, we see that the layering of fossils predominantly represents the order in which organisms, which had all lived at the same time just before the Flood, were catastrophically buried as a result of the global Flood. Furthermore, organisms vary within their created kinds and do not evolve into new kinds.

So, what came first, bee vision or flower color? The answer is in Genesis. God made all kinds of plants on the third day of Creation Week and flying creatures on the fifth day, all about 6,000 years ago. God created plants and animals to reproduce successfully, so we can conclude that He created some organisms capable of forming productive partnerships such as we see here. The genetic capacity to vary would enable some organisms to establish mutually favorable partnerships as conditions changed. But the flowers came first.

It comes as no surprise that God, our Common Designer, equipped many organisms with the same sorts of visual receptors. And it is also no surprise that bee attraction to certain sorts of flowers would, through the process of natural selection, cause proliferation of flowers most attractive to pollinators. None of this supports molecules-to-man evolution but nicely illustrates the proper functioning and interrelationship of the organisms God made.