The reputation of Neanderthal Man, once seen by many as big-browed grunting brutes less evolved than modern humans, is due for yet another facelift. At Abric Romaní, west of Barcelona, Spain, a Neanderthal archaeological site has revealed a new domestic side of its ancient occupants. Archaeologists from the Catalan Institute of Human Paleoecology and Social Evolution have discovered evidence that some Neanderthals heated water in their homes.

Based on the arrangement of artifacts and hearthstones, the Abric Romaní cave seems organized into functional rooms. Near one rock wall is a hole measuring 16 by 12 by 4 inches. Well-used hearths, containing stones fractured by heat, surround it. Archaeologists suspect this built-in basin was used to heat water by adding heated stones from adjacent hearths. 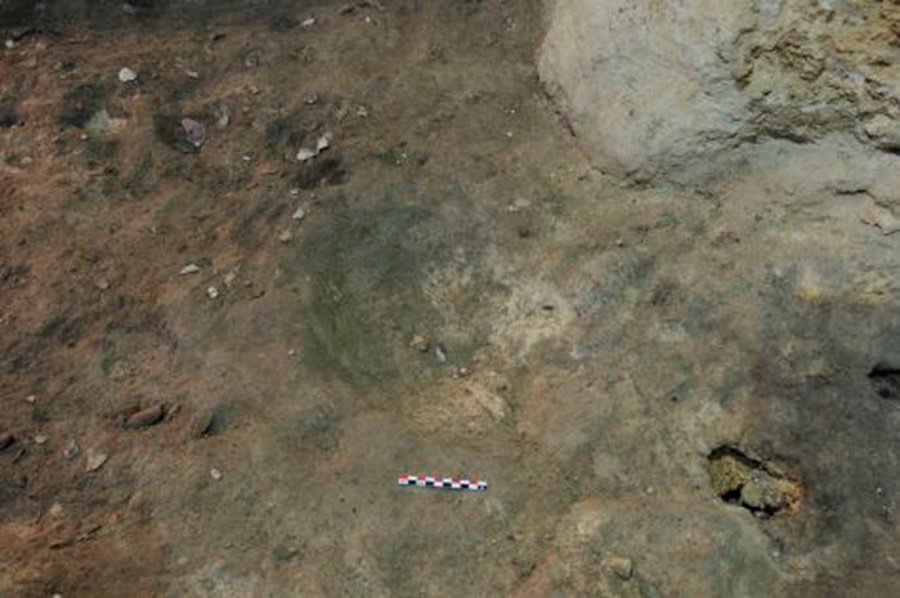 This depression, about 16 x 12 x 4 inches, was found near a rock wall in a Spanish cave once occupied by Neanderthals. Surrounded by hearthstones, the basin may well have served as a vessel for heating water with hot rocks. Image reproduced from Palmira Saladié, IPHES News. View larger image.

Hearths demarcate the rooms in the Abric Romaní cave dwelling. Near an opening on the cave’s lower level is an area apparently devoted to making and using tools. In it are tools made from a variety of stones, including flint, limestone, and quartz. Some of these tools have been shaped to have saw-toothed edges, making them very useful for butchering. Nearby are animal bones from at least 15 animals, all showing cut marks indicating they were butchered and dismembered.1 Discarded animal bones also appear in some hearths. In addition, the cave home has a section that appears to have been the Neanderthal’s rubbish pile. 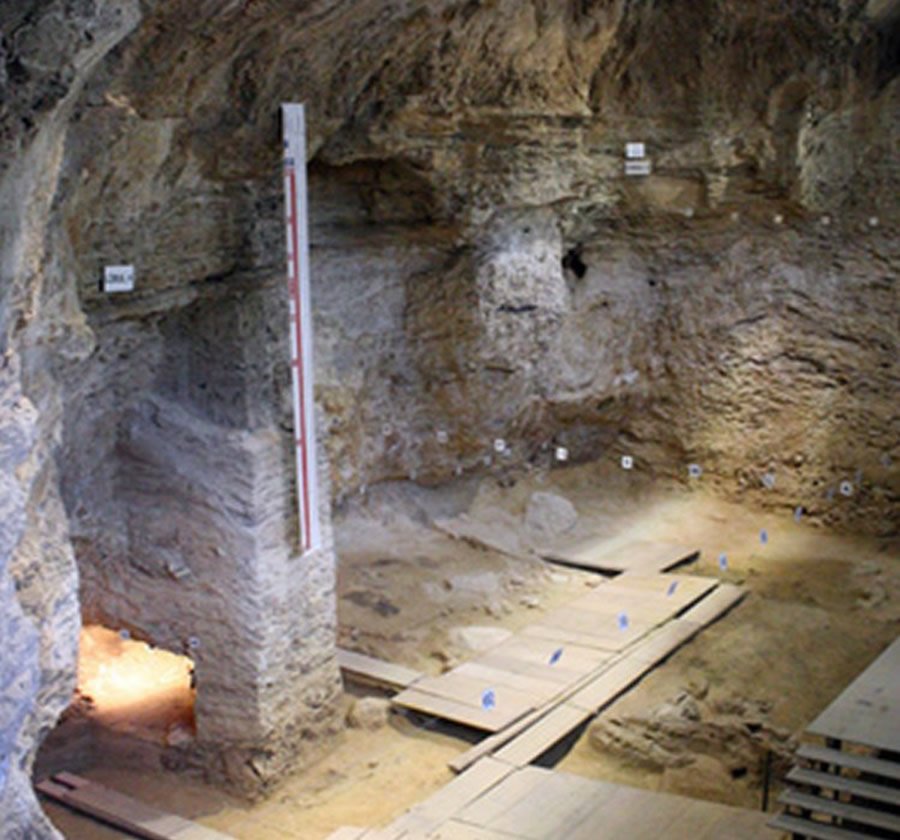 The Neanderthal occupation at Abric Romaní has been excavated off and on since the early 20th century. Modern archaeological methodology, carefully exploring and cataloging the ancient cave home layer by layer, is revealing more information about the Neanderthal’s organized domestic life. Image reproduced from V. Mourre, Ancient Pages.

Neanderthal architectural preferences like hot water, organized living spaces, and warm bedrooms only add to our growing understanding that Neanderthals were probably not all that different from us. We can only imagine whether the Neanderthals used hot water to cook, wash, or warm their feet. Neanderthals in El Sidrón cave, also in northern Spain, ate cooked vegetables and made use of bitter medicinal herbs.

Neanderthals were probably not all that different from us.

From other sites we know that Neanderthals not only made complex tools but even fashioned lumps of pigment into drawing tools that would have been suitable for applying make-up to their bodies. And it appears they wore jewelry.

Neanderthals are also thought to be the artists who arranged their painted handprints on cave walls elsewhere in northern Spain. Based on other archeological sites, archaeologists have deduced that Neanderthals cared for the permanently injured or diseased among them, buried their dead, and even appear to have planted flowers around a grave.4

Neanderthals left no written account of themselves. This should not really shock us as many modern people groups still speak unwritten languages. Nevertheless, some have claimed that Neanderthals were too evolutionarily primitive to use language. However, genetic analysis of the Neanderthal genome has shown that the form of the FOXp2 gene associated with language learning in modern humans matches the Neanderthal gene. (See “FOXP2 and the Non-Evolution of Human Language” and “Red-Haired, Fast-Talking Neanderthals” to learn more.)

Moreover, evidence indicates that Neanderthals were, like modern humans, predominantly right-handed. Having a dominant hand is uniquely human, signifying brain lateralization, and it is a feature that makes language possible. (See “Handedness of Early Humans Speaks Volumes.”) It is no surprise therefore that Neanderthals have left their footprints in modern human DNA, possibly through inbreeding. Furthermore, evidence suggests they intermingled with other ancient varieties of humans. (Have a look at “Neanderthal Toe Said to Suggest an Incestuous Culture” to find out the real tales a toe bone can tell.)

Evolutionists need primitive lower evolutionary forms of humans to populate their version of evolutionary history, and Neanderthals long provided them with one. That view is being modified thanks to new discoveries, leaving evolutionists to search for other more primitive candidates for their charts and stories. In truth, scientific research affirms what a biblical creation model predicted all along. Neanderthals, like other varieties of humans often called “cavemen,” were simply human beings.

When Did Neanderthal Man Live?

Some people, because they insist on stuffing millions of years into the days of the biblical Creation Week, have a hard time explaining the evident humanity of the Neanderthals and have been known to deny it. Indeed, the various dates evolutionary scientists have assigned to Neanderthals all greatly exceed those from biblical history. In truth, there is no way to objectively calibrate the various means used to “date” ancient people like Neanderthals. These extraordinarily large dates—like 60,000 years—are all based on worldview-based interpretations of scientific data. (See “Carbon-dating Neanderthals in Spain Overturns Long-held Beliefs” to learn more.)

All such dating schemes depend on what a scientist believes to be a reliable source of information about a time in history that cannot now be directly observed.

All such dating schemes depend on what a scientist believes to be a reliable source of information about a time in history that cannot now be directly observed. When a scientist is willing to accept the historical record provided by God in His Word as the basic timeline for human history, Neanderthals and other “cavemen” make sense. All humans, including Neanderthals, descended from Adam and Eve, and more recently from Noah’s family. Even their anatomical variations make sense when we understand that they were fully human descendants of people dispersed from the Tower of Babel some time after the global Flood. (See for instance “Human Evolutionary Lineages Teeter on Neanderthal-Style Inner Ear” and “Can Neanderthal Noses Sniff Out the Secret Paths of Human Evolution?”) When we want to learn the truth about the unobservable past from the artifacts unearthed by archaeologists and paleontologists, we are wise to remember that that starting point for our thinking should be the Word of God, the one completely reliable, all-knowing eyewitness to all of human history. Read more about how “cavemen” can be explained by the Bible and the fossil record in “When Did Cavemen Live?”

Previous Article Did the Human Brain Evolve the Ability to Evolve ?