Putting a New Face on Neanderthals

Archaeologists have found evidence that Neanderthals used cosmetics, contrary to their uncomely and brutish reputation.* Neanderthals apparently added yellow and red pigments to shells, and the shells themselves may have been used as jewelry. 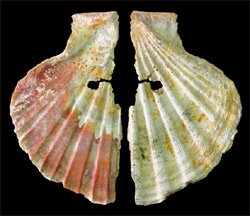 Shells coated with residues of mixed pigments possibly were used by Neanderthals for cosmetics. Photo courtesy of Joao Zilhao

Creationists see all humans, including Neanderthals, as descendants of the same first man and woman, Adam and Eve. For decades, creationist researchers have attempted to correct the stereotype that Neanderthals were stupid creatures and were transitions between apelike animals and humans. The research simply does not support the stereotype.

Aside from certain skeletal characteristics, Neanderthals were probably no different from other humans, and thus creationists consider them to be humans. Studies have also found that a close relationship exists between present-day European DNA and Neanderthal DNA.