How can you tell a fossilized skull belonged to a Neanderthal? The comparatively large size and prominent brow ridges? Actually—until now at least—paleoanthropologists have looked at a more subtle feature: the shape of the labyrinth in the inner ear. This bony chamber cradles the human body’s balance organ—the semicircular canals—within the temporal bones on each side of the skull. The Neanderthal bony labyrinth differs from that of modern humans and other archaic humans in a suite of subtle but specific ways long deemed diagnostic of Neanderthals. But not anymore!

The bony home of the inner ear in Xujiayao 15, an archaic human’s skull recovered 35 years ago in East Asia, matches that of Neanderthals, but Xujiayao 15 was not Neanderthal. “We were very surprised,” Trinkaus says, because “it looks like a Neanderthal,’” adding, “It’s clearly not modern human.” The bony labyrinths of other archaic humans more nearly resemble those of modern humans. “We fully expected the [CT] scan to reveal a temporal labyrinth that looked much like a modern human one,” Trinkhaus says, “but what we saw was clearly typical of a Neanderthal.” 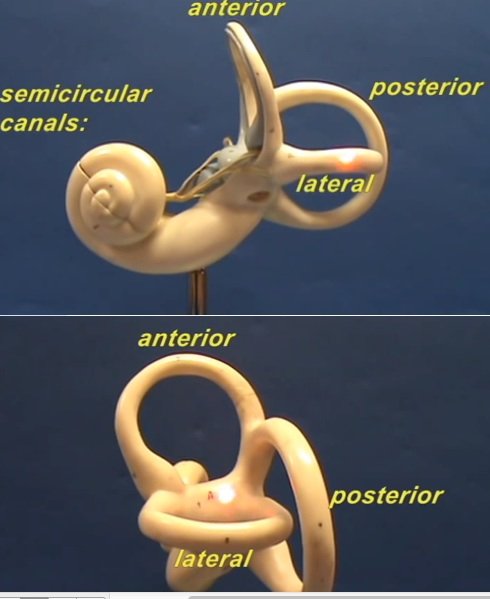 These two views from an educational YouTube video show the semicircular canals. The three fluid-filled semicircular canals are about 1.5 mm in diameter. They are arranged at right angles to one another. The anterior one is closest to the spiral-shaped cochlea, which conducts sound to the brain. Together these semicircular canals detect rotation and help maintain balance. Images by Dr. Robert Droual, Modesto Junior College, Bony Labyrinth Model: Semicircular Canals on YouTube.

Your inner ear consists of the spiral-shaped cochlea—which transmits sound to your brain—and three semicircular canals (plus a saccule and utricle) for balance—sort of a biological gyroscope. The semicircular canals—each roughly 2/3 of a circle and about 1.5 mm in diameter—are oriented in three dimensions at right angles to each other. The shifting of fluid within them pushes against sensory structures to detect changes in angular momentum (rotation). These semicircular canals are part of the bony labyrinth embedded within the petrous portion (“stone” bone) of the skull’s temporal bone. Therefore the shape of the semicircular canals is often preserved in a fossilized skull. High-resolution CT scans can measure these canals and map their relative positions.

So what does Trinkhaus think about this discovery’s implications? He remains cautious and says that for now the implications are unclear:

The study of human evolution has always been messy, and these findings just make it all the messier. It shows that human populations in the real world don’t act in nice simple patterns. . . . It suggests, instead, that the later phases of human evolution were more of a labyrinth of biology and peoples than simple lines on maps would suggest.”3

Over are the days of assuming that this semicircular canal configuration is a defining characteristic of a Neanderthal, Trinkhaus makes clear:

You can’t rely on one anatomical feature or one piece of DNA as the basis for sweeping assumptions about the migrations of hominid species from one place to another. What these findings say to me are that characteristics were probably more varied in ancient human populations than we think. We see characteristics mix and match in populations across the world nowadays, and I believe that characteristics shuffled back and forth in ancient human populations across the landscape over centuries and millennia. The idea of distinct, separate lineages in this time period in human evolution is meaningless—it was much more of a labyrinth than that. 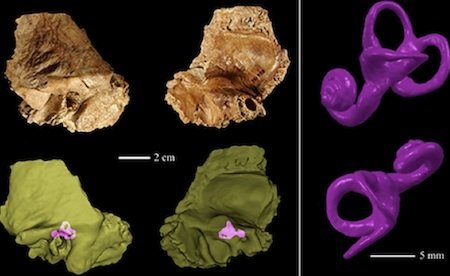 The semicircular canals fill the bony labyrinth in the inner ear. The bony labyrinth is within the petrous part of the temporal bone. The temporal bone of Xujiayo 15 is pictured in the top photos. The lower illustration shows the position of the bony labyrinth, and on the right is the bony labyrinth’s CT-based reconstruction. In Neanderthals—and in Xujiayao 15 shown here—the anterior canal is slightly smaller, the lateral canal slightly larger, and the posterior superior canal is placed just a little more inferior relative to the lateral canal than in most modern and other archaic humans. Image by Institute of Vertebrate Paleontology and Paleoanthropology, Chinese Academy of Science, via Huffington Post.

Following the global Flood and dispersal from the Tower of Babel, the descendants of Noah’s family dispersed. Some isolated groups of people would have developed distinguishing traits, but all were still human. That there is overlap of some of these features is no surprise, as all these people were descended from Noah’s sons and their wives. And though people emigrated away from the Tower of Babel, intermarriage between groups would be no surprise, and thus the sporadic occurrence of traits not normally associated with certain groups would be expected.

Learn more about the labyrinthine dispersal of people and what we can learn about their descendants that dispersed through the world from the plains of Shinar in “Was the Tower of Babel Dispersion a Real Event?” Biblical history makes sense of the maze of migrations, which have nothing at all to do with human evolution. Neanderthals and other archaic humans were just as human as the person each of you sees in the mirror.