When did Neanderthals last occupy Spain? Were they there at the same time as modern humans? 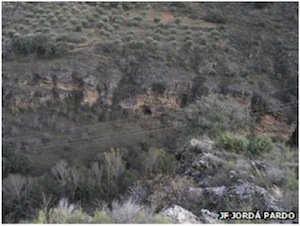 The Jarama VI cave is one of the two Neanderthal sites where investigators found their radiocarbon-dated specimens overturned previous dates and assumptions. The newer dates, however, still suffer from major assumptions that drastically limit their usefulness. The investigators still have no way to objectively calibrate their dates for the distant past. Image credit: JF JORDA PARDO through www.bbc.co.uk

For two decades evolutionary anthropologists have thought Neanderthals made their last stand in Spain after briefly co-existing there with modern humans. “Much of the evidence that has supported this idea is based on a series of radiocarbon dates, which cluster at around 35,000 years ago,” says Rachel Wood, lead author of a study just published in Proceedings of the National Academy of Sciences. “Our results call all of these results into question.”

Researchers working with Oxford’s Thomas Higham used ultrafiltration to clean samples of contaminants. “Ultrafiltration removes smaller degraded fragments of proteins and other molecules such as amino acids, allowing us to date the large collagen strands that are nice and intact,” explained Wood.

Wood says the real surprise “was the enormous difference ultrafiltration dating made. . . . At other sites in Europe, we have seen that this improved method of dating bone makes a difference, making old bones older. However, we do not normally see such consistently large differences.”

Most of the 215 bones examined from 11 sites in southern Spain did not contain enough collagen to date. Six animal bones found in Neanderthal-associated sediment provided “meaningful results.” One produced dates comparable to those previously obtained, but researchers suspect the artifacts in that region belonged to early modern humans. The other five specimens yielded dates around 10,000 years older than previously thought. For instance, a goat bone from Zafarraya Cave, previously estimated at 33,300 years, was re-dated after ultrafiltration at more than 46,700 years old. Higham says, “Our work suggests that . . . it is unlikely that Neanderthals survived any later in this area than they did elsewhere in mainland Europe.”

Our work suggests that . . . it is unlikely that Neanderthals survived any later in this area than they did elsewhere in mainland Europe.

Others disagree. Archaeologist Clive Finlayson of the Gibraltar Museum, says, “Radiocarbon methodology on bone will not resolve the question of the last Neanderthals. What they have done is look at two sites in Iberia where—using my own models—I would never have predicted a late Neanderthal extinction. One is up in the high Meseta of central Spain, at 1,000m or more, with a very harsh climate and the other is in the mountains of Granada—again in a very harsh environment. These climates are so cold and dry, that is where the collagen in the bone has preserved and they have been able to get dates. . . . What I think the method is giving us is a skew, a bias, towards older dates by the very nature of the preservation.” Bone collagen doesn’t preserve well at the warmer sites where Finlayson thinks the last Neanderthals lived. Finlayson’s team has dated charcoal from Neanderthal-occupied Gorham Cave in Gibraltar to about 28,000 years.1

The researchers’ goal was “to test the reliability of the radiocarbon evidence for late survival of Neanderthals in southern Iberia.”2 Unfortunately, mere elimination of contaminants does not and cannot address the many other assumptions on which dating results are interpreted. Conventional interpretation of radiocarbon dates relies on several assumptions:

None of these assumptions holds true. Scientists have found exceptions to them all. For instance, the earth’s magnetic field affects the rate of carbon-14 production in the atmosphere by shielding the earth from cosmic rays that initiate the conversion of nitrogen-14 to carbon-14. Since evidence suggests the earth’s magnetic field was much stronger just a few thousand years ago, the amount of carbon-14 present then would have been much lower. Consequently, radiocarbon-dated artifacts that are really only a few thousand years old yield very much older radiocarbon dates.3

The researchers note that some values they obtained (three of the five, in fact) were “close to or beyond the limit of the radiocarbon method,” which is about 50,000 years. However, they used a calculation for the supposed background correction based on analyses of detectable carbon-14 in material presumably so old it should not contain any carbon-14 anyway, thus ignoring that the material may in fact be young. Furthermore, the authors of the study point out that other dating methods used on bone are also prone to give unreliable results. They write, “In addition to the uncertainties regarding radiocarbon dates in this period, U-series, electron spin resonance, and amino acid racemisation can be unreliable when dating the open systems of osseous remains.”4

Unless rigorous pretreatment protocols have been used, radiocarbon dates should be assumed to be inaccurate until proven otherwise in this region.

Finally, the authors recommend that in future, “Unless rigorous pretreatment protocols have been used, radiocarbon dates should be assumed to be inaccurate until proven otherwise in this region.”5

Commenting on the study, geologist Dr. Andrew Snelling of Answers in Genesis remarks, “But who is to say their rigorous protocol is sufficient to give accurate radiocarbon dates? What objective standard can be used to determine which dates are better or more accurate? It is really only the whim of the researchers. They admit that none of the many methods used are reliable on dating bones.”

This study illustrates that scientific conclusions considered incontrovertible are often flawed by unsuspected problems and unverifiable assumptions. Furthermore, as Dr. Snelling points out, there is no objective way to actually calibrate any dating methods for this period.

All the dates obtained for Neanderthal and early modern human occupation of Europe greatly exceed those obtained from biblical history. At best, such dates can only be used in a relative sense. The differing magnetic field and the additional effect of the changes in the earth’s biomass as a result of the global Flood would have made the carbon-14 levels in the world in the years after the Flood (when the Neanderthals lived) impossible to know. We may never know whether Neanderthals and early modern humans coexisted in Europe or were only parts of successive waves of people migrating after the dispersion from the Tower of Babel. But what we do know is that they were all descended from Noah’s family since the global Flood and therefore lived less than 4,500 years ago.

Previous Article News to Note, February 2, 2013 Next Article Could a Sudsy Pond Bring Forth Life?