Modern People Can Climb Trees, Why Not Lucy?

Evolutionary researchers have long been planting Lucy’s australopithecine feet firmly on the ground to show she evolved to walk bipedally along an evolutionary path to becoming human.

In the on-going debate about Lucy’s anatomical fitness for walking upright, research has confirmed that the Au. afarensis upper body was well-designed for swinging through trees.1 But if her feet really were arched—a notion with dubious support but commonly held in the evolutionary community—that arch should have made vertical tree-climbing impractical. 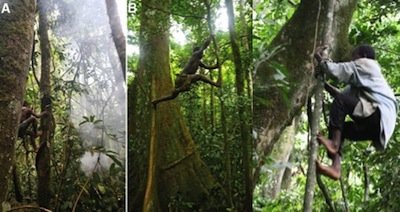 These tribesmen, subjects of a recent study of the anatomy of climbing, have spent their lives vertically climbing trees to obtain honey. Apparently as a result of such consistent activity, their calf muscle fibers have become longer than those of the men of neighboring non-climbing tribes. They are thus able to dorsiflex their ankles far greater than normal, an ability that facilitates their efforts to “walk” up tree trunks. Notice the high degree of dorsiflexion in the third photo, giving a V-shape to the ankle while climbing. Image credit: photograph A by Rebecca Blackwell and photograph B by Bruno Zanzottera, illustrating V. Venkataraman et al., “Tree climbing and human evolution,” at www.pnas.org. Third photo by Nathaniel Dominy from phys.org

It is commonly believed that an arched foot cannot dorsiflex (bend upward at the ankle) far enough to efficiently walk up a tree trunk.

It is commonly believed that an arched foot cannot dorsiflex (bend upward at the ankle) far enough to efficiently walk up a tree trunk.2 “Australopithecus afarensis possessed a rigid ankle and an arched, nongrasping foot,” writes Dartmouth University anthropologist Nathaniel Dominy. “These traits are widely interpreted as being functionally incompatible with climbing and thus definitive markers of terrestriality.”

The claim that Lucy’s foot was arched, incidentally, rests largely on three ideas:

After all the evolutionary effort to make a case for arched feet, anatomical analysis suggesting Lucy still swung through the trees with the greatest of ease begged the question of how she climbed up there if her feet were unsuited for tree-climbing.

Working from the belief that Lucy had arched feet and needing to give her a lift back up into the trees, Dominy and his graduate students checked out some tribesmen who regularly scale the woody heights to collect honey. They discovered these modern humans “walk” up tree trunks quite well. Why doesn’t human foot and ankle anatomy interfere?

Dominy reports in the Proceedings of the National Academy of Sciences that ultrasound comparison of neighboring tribesmen in Uganda and the Philippines show that tribesmen who regularly climb trees have longer gastrocnemius (calf) muscle fibers. The men of the Ugandan Twa and of the Filipino Agta plant the soles of their feet flat on the trunks of small diameter trees and “walk” their arms and legs up to the treetops. To do so, they dorsiflex their feet far more than we do for ordinary walking and farther than modern humans typically are able to do.

Dominy compared the Twa and Agta tree-climbers’ calf muscles to those of their agricultural neighbors, the Ugandan Bakiga and the Filipino Manobo. “We hypothesized that a soft-tissue mechanism might enable such extreme dorsiflexion,” he writes. The habitual tree-climbers had longer calf muscles, allowing their feet to fold much farther. “These results suggest that habitual climbing by Twa and Agta men changes the muscle architecture associated with ankle dorsiflexion,” they write. Therefore, they conclude, “This study shows that the foot and ankle of Au. afarensis are not incompatible with climbing behavior—at least as it is performed by some modern hunter–gatherers. The diverse locomotor repertoire evinced by facultatively arboreal modern humans cautions against using even the most derived (modern human-like) traits in Au. afarensis as unequivocal evidence of negligible arboreality.”4

This research does an excellent job of showing how many aspects of anatomical functionality and limitations cannot be determined from fossil evidence.

This research does an excellent job of showing how many aspects of anatomical functionality and limitations cannot be determined from fossil evidence. Living animals and living humans are able to adapt to the needs of daily life in ways to which long dead bones cannot bear witness. Such adaptable design is a credit to our wise Creator.

While showing that Lucy-the-swinger would have been able to get up the trees to swing even if her foot were arched (an idea by no means proven), however, the research fails to support to the concept of human evolution from ape-like ancestors. People aren’t people because they walk upright but because God created them with the genetic information (and the spiritual nature) to be human. There is no mechanism by which an ape-like creature could, even gradually, acquire the genetic information to become human, for mutations do not create such new information. Furthermore, the fossil record of apes and humans does not demonstrate transitional creatures, just varieties of apes and varieties of humans. God created humans and apes on the same day about 6,000 years ago according to His own eyewitness account, and nothing in the fossil record or genetics demonstrates (or can demonstrate) that they shared any evolutionary ancestry.