Order in the Fossil Record

Some creationists believe that the geological column is a figment of evolutionists’ imagination. Yet by visiting places like the Grand Canyon—Grand Staircase region, you can literally climb through the rock layers and see the sequence and patterns of the layers firsthand. The rock layers are real and can be explained within the biblical framework of earth history.

Some biblical creationists believe that the fossil record, as depicted in geologic column diagrams, does not represent reality.

This assessment is usually based on the unfortunate claim that the geologic column is only theoretical, having been constructed by matching up rock layers from different areas of the world that contain similar fossils.1 They also believe that the layers were arranged based on an assumed evolutionary order of fossils, so they conclude that the whole concept of the geologic column and the order of rock layers must be totally rejected.2

To the contrary, we can walk across various regions of the earth and observe that the rock layers and the fossils contained therein generally match what is depicted in the widely accepted geologic column diagrams. Furthermore, biblical creationists can be greatly encouraged by the fact that the order and patterns of the fossil occurrences are predicted by, and can be explained according to, the biblical framework of earth history.

The best way to begin evaluating these claims is to examine a geographic region where the rock layers and fossils are well exposed and well studied. A spectacular example is the Colorado Plateau of the southwestern USA, and more specifically, the Grand Canyon—Grand Staircase rock layers sequence. 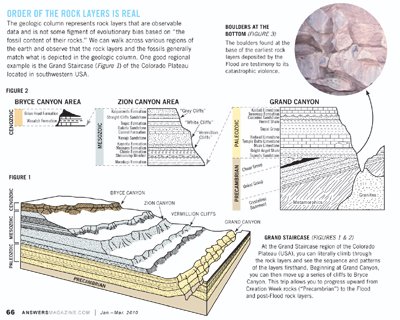 Order of the Rock Layers is Real, Figures 1 through 3. Click the picture to view a larger, pdf version.

The diagrams in Figure 1 provide more details about individual sedimentary rock layers, including the names assigned to them for easy reference. These names usually have two components. The first is a local feature, such as an Indian tribe (e.g., Supai), and the second component is the type of sedimentary rock in the layer, such as limestone, sandstone, or shale. So, for example, the “Redwall Limestone” is named for the distinctive red cliff (or wall) made of limestone. If a layer includes a variety of different sediments at different levels, it is termed a formation, such as “Toroweap Formation.”

Walking in the area, we can see other obvious patterns. When similar rock layers are always found together in outcrops and hills, they are called a group. The Supai Group, for example, consists of four other named layers: the Esplanade Sandstone, the Wescogame Formation, the Manakacha Formation, and the Watahomigi Formation. No matter which direction you go in the Colorado Plateau, wherever you find one of these layers, the other three appear in the same sequence as well.

The diagram of the geologic column is not some figment of evolutionary bias based on the fossil content of their rocks. The rock layers are observable data.

It seems trite to say it, but the names for these rock layers represent real places and patterns! Any keen observer could literally hike (and climb) from the bottom of Grand Canyon up its walls and on up the Grand Staircase, inspecting each layer and noting how they are progressively stacked on top of one another all the way to the top of Bryce Canyon. You don’t have to rely on the fossils contained in these sedimentary rock layers, or any evolutionary assumptions, to conclude that this local geologic strata column, as depicted in Figure 1, is tangible and real. These rock layers are observable data, so the diagram is not some figment of evolutionary bias based on “the fossil content of their rocks.”5

The Order in This Fossil Record

Now that the physical reality of this local rock column has been established, we must conclude that the fossils contained in these rock layers are also a valid record of the order that creatures were progressively buried within each successive sedimentary layer.

At the bottom of the Grand Canyon, the first sedimentary layers are those of the Unkar Group and the Chuar Group (Figure 1, Grand Canyon). These sedimentary layers were deposited on top of the “crystalline basement” rocks, which were created by volcanic activity (granites) and the transformation of other sedimentary and volcanic layers by heat and pressure (metamorphics). Obviously these sedimentary layers of the Unkar and Chuar Groups were horizontal when originally deposited, but subsequent earth movements tilted them. Most creationist geologists believe that upheaval coincides with the onset of the Genesis Flood.

At the top of all these rocks, running the length of the whole canyon, is a prominent erosion surface, where the Flood waters violently eroded all pre-existing (pre-Flood) rocks, as the water rose up from the oceans to advance over the continents.6 Above this erosion surface is the Tapeats Sandstone, which represents one of the earliest layers of sediment deposited by the Flood. The boulders found at its base (Figure 2) are testimony to the catastrophic violence of the onset of the Flood.

Patterns in This Fossil Record

If we truly find a clear order of sedimentary layers, then we would expect to be able to look at the fossils contained in each of these layers and find patterns that give us clues about why the creatures were deposited in this particular sequence.

The best way to do that is to see a list of the fossils found in each of the main layers, as in Figure 3.7 A careful examination of this list reveals the order in which creatures were buried by the Flood. 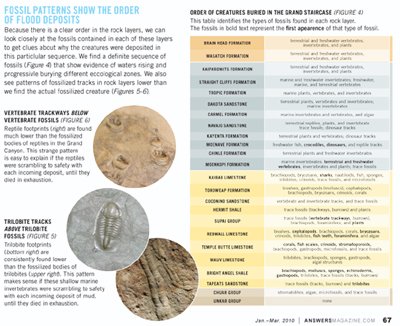 Fossil Patterns Show the Order of Flood Deposits, Figures 4 through 6. Click the picture to view a larger, pdf version.

Pre-Flood Single-Cell Fossils. It is hardly surprising that the fossils found in the pre-Flood Chuar Group don’t require catastrophic burial to form. The one-celled organisms in these layers, such as algae that form mounds (called stromatolites), required calm environmental conditions for burial and fossilization. Even today, algae build these structures, called stromatolites, only in calm conditions.

Shallow Marine Invertebrates of the Seafloor. Trilobites, brachiopods, and other shallow marine invertebrates are the first creatures to be buried in the first sedimentary layers of the Flood—the Tapeats, Bright Angel, and Muav.

Fish. It is not until the Temple Butte Limestone that fish remains are found. Note, however, that the marine invertebrates are found buried at almost every level in this fossil record. This is consistent with the ocean waters rising and washing across the continents during the Flood, carrying these marine creatures with the sediments in which they were buried.8

Land Plants and Reptile Footprints. Next note that the first land plants are found buried in the Supai Group, where the fossilized footprints of amphibians and reptiles are also found.

The conventional explanation of the fossil order is progressive evolutionary changes over long periods of time. But this explanation runs into a huge challenge. Evolution predicts that new groups of creatures would have arisen in a specific order. But if you compare the order that these creatures first appear in the actual fossil record, as opposed to their theoretical first appearance in the predictions, then over 95% of the fossil record’s “order” can best be described as random.11

As the Flood waters rose, they buried organisms in the order that they were encountered. This means the major groups found in the fossil record appear according to where they lived, not when they lived.

On the other hand, if these organisms were buried by the Flood waters, the order of first appearance should be either random, due to the sorting effects of the Flood, or reflect the order of ecological burial. In other words, as the Flood waters rose, they would tend to bury organisms in the order that they were encountered, so the major groups should appear in the fossil record according to where they lived, and not when they lived. This is exactly what we find, including this fossil record within the Grand Canyon—Grand Staircase.

You can also see another interesting pattern that confirms what we would expect from a global Flood. You would expect many larger animals to survive the Flood waters initially, leaving their tracks in the accumulating sediment layers as they tried to escape the rising waters. But eventually they would become exhausted, die, and get buried.

What do we find? In the Tapeats Sandstone are fossilized tracks of trilobites scurrying across the sand, but fossilized remains of their bodies do not appear until higher up, at the transition into the Bright Angel Shale (Figure 4).

Similarly, we find fossilized footprints of amphibians and reptiles in places that are much lower (in the Supai Group, Hermit Shale, and Coconino Sandstone, Figure 5) than the fossils of their bodies (in the Moenkopi Formation).

At the Grand Canyon—Grand Staircase strata sequence, both the column of sedimentary rock layers and the fossils are observable and real. The stacked layers throughout this region appear in a definite order. They contain fossils in a recognizable order, too, reflecting the order in which the organisms were buried during the Flood.

So the geologic column and the fossils’ order and patterns agree with the biblical framework of earth history. The observable evidence in God’s world totally agrees with what we read in God’s Word.

Order in the Fossil Record

The Stones Cry Out