Did Our Ancestors Evolve Into Humans Feet First?

Belief that bipedal locomotion was the key to human evolution gets flipped on its hands.

Once upon a time, the proponents of human evolution debated about which came first—big brains or bipedal locomotion. It was generally easier to claim that small-brained extinct fossilized apes were bipedal than that they had big brains, so the bipedal position won out. But how could coming down from the trees and walking on two legs provide the evolutionary incentive for hominid brains to grow? Did hands finally free to use tools promote hominid brain evolution or did the necessity of using tools make bipedal locomotion the only way to go further up the evolutionary ladder?

A study published this month in Philosophical Transactions of the Royal Society B reports that brain-mapping data on monkeys and humans resolves this debate. In answer to the question of which came first—better hands or better feet—the University of Tokyo team says, “Neither!”

People have long speculated whether the evolution of bipedalism in early hominins triggered tool use (by freeing their hands) or whether the necessity of making and using tools encouraged the shift to upright gait. Either way, it is commonly thought that one led to the other. In this study, we sought to shed new light on the origins of manual dexterity and bipedalism by mapping the neural representations in the brain of the fingers and toes of living people and monkeys. Contrary to the ‘hand-in-glove’ notion outlined above, our results suggest that adaptations underlying tool use evolved independently of those required for human bipedality.1

In order to get a handle on the evolutionary history of the human hand, the team chose to use an Old World monkey—a macaque—rather than a chimpanzee. Chimpanzee hands are specialized for arboreal life and confuse the picture, creating what the authors call “the riddle of man’s ancestry.”2 The Old World monkey is thought to have diverged from the ape-ancestral line before the supposed human-chimp split. The monkey has hands—and even feet—very similar to human hands (see illustration). Therefore, the Tokyo team picked the Old World monkey to help them study human hand evolution.

Testing Evolution in the Here and Now?

Neurobiologist Iriki says, “Evolution is not usually thought of as being accessible to study in the laboratory, but our new method of using comparative brain physiology to decipher ancestral traces of adaptation may allow us to re-examine Darwin's theories.”

Using magnetic resonance imaging for humans and electrophysiological recordings for monkeys, the team mapped the brain location stimulated by touching each digit. They found that, in both in monkeys and humans, each finger maps to a discrete region on the brain’s cortex. Thus each finger sends sensory information to a particular spot on the brain and receives instructions for independent movement. This is necessary for manual dexterity. 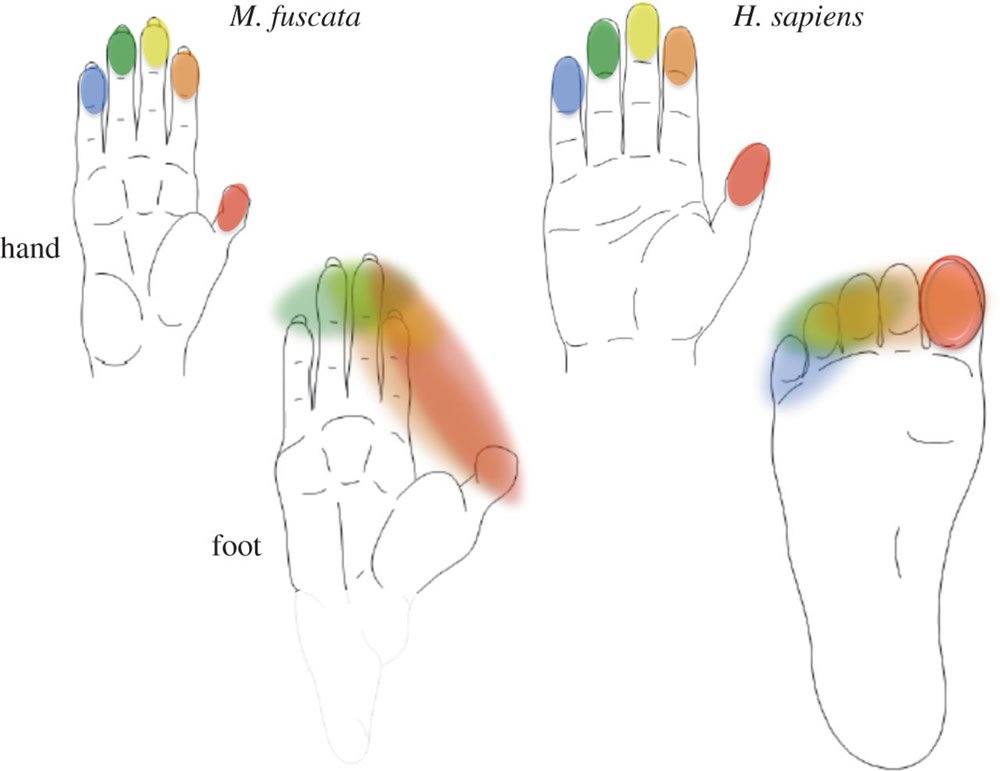 The Japanese macaque (Macaca fuscata) has hands and feet that look and function much like human hands. Unlike these appendages, the human foot has a big toe for balance instead of an opposable thumb-like first digit. A Tokyo team of researchers has concluded, after comparing brain-maps of these hands and feet, that humans evolved their terrific manual dexterity without waiting for balanced bipedal gait to evolve and free up their hands. Image by T. Hashimoto et al., via Philosophical Transactions B.3

Explaining the importance of each finger having its own unique map on the brain, as well as their choice of the monkey to study, the researchers write:

Fine somatosensory resolution is critical to hand dexterity, because the sensory feedback from fingers contributes to adaptive precision grip. Monkeys can use tools as an extension of their arms, whereas chimpanzees lack tool-related grips, such as forceful gripping, precision handling and power squeezing, owing to their long fingers and short thumbs. Rather, the chimpanzee hand is elongated and hook-like, and effective in hanging from trees. In chimpanzees (and bonobos and gorillas), the backs of the middle fingers contact the ground (or large branches) during quadrupedal knuckle-walking. By contrast, monkeys dorsiflex their hands and place their palms and/or extended fingers on the ground or branch during quadrupedal walking. As in humans, monkeys can use the thumb both in precision grips, such as pinching an object between the tip of the thumb and other fingers, and in power grips.4

Since monkey and human manual dexterity as well as their finger-to-brain maps were similar, the team believes they reflect a common ancestral toolkit. The fact that the hands of cousins supposedly closer-to-human, the chimpanzee and gorilla, deviate from this human-like finger fashion is deemed an irrelevant riddle, the authors writing that “the dexterity of the human hand is an adaptive reuse of an existing mechanism with only minor modifications.”5

When it comes to “origins science,” it is impossible to actually go back in time and observe those origins.

Although both the monkey feet and hands look like human hands, the team found that monkey toes do not map to individual spots on the monkey brain. All five monkey toes send sensory signal to the same cortical spot. Such “primitive” foot neuroanatomy in the monkey doesn’t really do justice to its finger-like toes, but the team must conclude that the monkey’s ancestors evolved fine-tuned hands without any reliance on improved foot designs or any relation to its feet at all. Neuroanatomical evolution of the monkey and human hand evidently left their feet in the dust.

Brain maps of human toes demonstrate yet another variation on the digital map. The four smaller human toes, like the monkey’s, all map to the same communal cortical location, but the human big toe sends signals to a spot all its own. The big toe’s sensory input is vital for balance in bipedal locomotion, whereas a grasping big toe like a monkey’s would not help ancestral hominids in the evolutionary efforts to come down from the trees and up the evolutionary ladder. The Tokyo team associates this big toe neuroanatomical design with a bipedal advance necessarily associated with the evolution of human bipedal locomotion.6

Thus the Tokyo team believes that feet do not hold the key to human evolution. Instead, they conclude, human ancestral hominids must have evolved their fine-tuned hands and their agile feet independently. They say, “In early quadruped hominids, finger control and tool use were feasible, while an independent adaptation involving the use of the big toe for functions like balance and walking occurred with bipedality.” In other words, they propose parallel evolution for the human hands and human bipedality, overturning the idea that one was the cause of the other.

“All this contradicts the notion that manual dexterity evolved as a result of bipedality, which frees the hands from locomotion. Rather, the primate (including human) hand and foot must have evolved at least in part independently,” they write.7 “The present findings,” they conclude, “suggest that ancestral primate hands and feet evolved (largely) independently. Contrary to received wisdom, one did not lead to the other.”8

The team notes that their method of brain-mapping in living descendants from divergent branches of the evolutionary tree represents an innovative and objective way to study evolution in the laboratory. And if molecules-to-man evolution really had occurred, such studies might give a clue to the sequence of events, as they claim. However, the idea that such evolution occurred is an unproven, unverifiable assumption without any observable scientific support.

Going Back in Time

When it comes to “origins science,” it is impossible to actually go back in time and observe those origins. Thus the conclusions a scientist draws from origins-related experiments depend upon the assumptions he or she already has in mind. And if the scientist’s worldview rejects the eyewitness account of the Creator God of the Bible and presumes evolution had to have happened, then he or she will interpret their origins-related data to arrive at their predetermined evolutionary conclusion.

In fact, no biological experiments have ever demonstrated that organisms could through natural processes acquire the genetic information to evolve into more complex, different kinds of organisms, even one step at time. By contrast, the biblical account in Genesis actually does fit with what we observe in biology—animals reproducing and varying only within their created kinds.

What the scientists in Tokyo have demonstrated through their comparative neuroanatomy of monkeys and humans is that each is well-designed with both similarities and differences equipping them to live and function well in different places. Monkeys and chimps have differences in their hand and foot shapes, but both are well-designed for their lifestyles. This is exactly what we would expect from the Intelligent Creator we share. Humans, created the same day as monkeys and apes about 6,000 years ago according to the Bible, did not have to evolve the ability to do or be anything but were already fully human—physically, mentally, and spiritually—being uniquely created in the image of God (Genesis 1:26-27).