Homo erectus had style and design of their tools down to a science.

Recent years have seen the rehabilitation of the Neanderthal reputation upward from basic brute. Now it’s time for Homo erectus, whose fossils appear deeper in the fossil record, to get a facelift. If the public truly gets wind of their ingenuity and skill at crafting tools from the barest of materials, we may one day see them as the mascots for a Craftsmen™ tool ad!

These handcrafted picks from Homo erectus sites, despite bearing conventional dates spread over half a million years, maintain a consistent shape and notched tip style. (ruler=20cm) Image credit: Y. Beyene et al., “The characteristics and chronology of the earliest Acheulean at Konso, Ethiopia,” Proceedings of the National Academy of Sciences (2013) www.pnas.org. 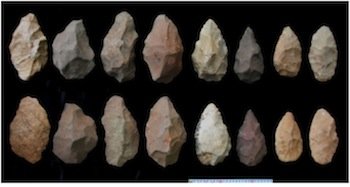 These hand axes were crafted using Acheulean technology by flaking off bits until the final product was sharp and functional. Researchers say that the common shape persisted for 900,000 years (two each, dated 1.75, 1.6, 1.25, and 0.85 million years, are shown left to right). By comparing the views of each side of each axe (shown one above the other), you can see that one of each of the first three pairs was constructed by flaking off bits mostly from one side. The other in each pair (and both of the last pair) are shaped and flaked on both sides. Thus Acheulean flake-knapping technology of even the more complex bifacial type was present even in the earliest Homo erectus tool collections. (ruler=25 cm) Image credit:  Y. Beyene et al., “The characteristics and chronology of the earliest Acheulean at Konso, Ethiopia,” Proceedings of the National Academy of Sciences (2013) www.pnas.org.

Conventionally viewed as one of the earliest essentially human species to evolve, Homo erectus’s name means “upright man” to denote his unquestionable bipedality. Homo erectus fossils appear from the late Pliocene to late Pleistocene and are generally dated from 1.8 million years to 300,000 years ago. Evolutionary anthropologists of course insist that the human brain and human intelligence had to evolve over millions of years. Therefore, Homo erectus has, like other “cavemen,” been generally viewed as an extinct throwback scraping out an unplanned existence in a world he didn’t understand with the simplest of tools. The discovery of probable cooking fires and somewhat more advanced tools associated with Homo erectus has led to speculation that cooking their food fueled the development of bigger brains.

Now, researchers report in the Proceedings of the National Academy of Sciences that they have re-dated and correlated geologic layers containing stone tools from northern Kenya’s Turkana Basin and Ethiopia’s Konso region hundreds of miles south. By examining tools associated with Homo erectus, they have determined the more advanced Acheulean tools actually show up in layers dated as old as 1.75 million years ago. Thus, they write, “Behavioral novelties were being established in a regional scale at that time, paralleling the emergence of Homo erectus-like hominid morphology.”1 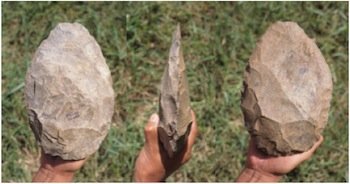 This hand axe from a Konso Homo erectus site has an extremely thin, sharp edge. It is practically symmetrical. Anthropologists note that producing a three-dimensionally symmetrical thin-edged object by sequentially flaking off bits of stone requires higher order thinking skills not previously associated with evolutionary presumptions about Homo erectus. Image credit: Y. Beyene et al., “The characteristics and chronology of the earliest Acheulean at Konso, Ethiopia,” Proceedings of the National Academy of Sciences (2013) www.pnas.org.

Acheulean tools are considered an advance over Oldowan tools. The latter are generally smaller and could be produced by simply shattering a suitable rock by hand or on an anvil-stone to get sharp usable pieces.2 Acheulean tools are typically larger and have been produced from rocks more than 4 inches in diameter by dint of purposeful and planned flaking. Since this process requires “increased motor skill and advanced hierarchical cognition,”3 it appears Homo erectus knew how to craft their tools to meet their needs and establish an “actual stylistic tradition.”4

The researchers further noted that tools in even the oldest geologic layers suggested a great deal of skill was required to produce them. They were generally large—4 to 8 inches or larger in greatest dimension—and included “both large cutting tools (handaxes, cleavers, and knives) and heavy-duty tools (picks and core-axes).”5 The oldest were primarily shaped by flaking from one face, but even in the oldest layers some bore the marks of more complex bifacial flaking.6

The earliest human remains are found in Ice Age deposits near Babel. By the middle of the Ice Age, however, human remains were scattered over three continents. New variations eventually appeared in different regions, such as Neanderthals in Europe. But by the end of the Ice Age, most of these variations disappeared. It is only at this late stage in the Ice Age that we find human remains in the Americas. Image and caption from answersingenesis.org.

Tools in higher layers exhibited refinements in functional design—such as handaxes with nearly symmetrical edges made thin and sharp all the way to the tip. Other tools—the picks—apparently requiring no functional modifications, not only maintained a fairly constant design over the years attributed to the rocky record, but even maintained a particularly artistic stylistic quality.7

“Within the Konso Acheulean sequence, the technologically less dynamic pick succession seems to exhibit evidence for subtle but actual stylistic tradition,”8 the authors write. Describing this artistic trademark, they write, “A common shape tradition can be inferred to persist through time. Although edge modification of the picks is neither universal nor standardized, the recurring tendency for a notched tip shape does suggest either functional and/or stylistic intent. The occurrence of diminutive examples corroborates the hypothesis that there was imposition of shape and that this imposition was, at least in part, stylistic.”9 In other words, for nearly a million years these people imprinted consistent shapes and their particular style on even the miniature versions of their picks.

Instead of being shocked that ancient human ancestors were advanced enough to have skills difficult even today, given similar resources, we note that these findings are exactly what we would expect to see in light of biblical history. Homo erectus people were a variety of human. Like all humans to exist since the global Flood nearly 4 ½ millennia ago, they descended from Noah’s family.

Descended from people who were dispersed from Babel, Homo erectus are preserved predominantly in the Lower and Middle Pleistocene sediments of East Africa and Central Asia, regions geographically close to the biblical Babel. In addition, Homo erectus fossils appear farther from Babel in Upper Pleistocene layers along with other varieties of people, such as Neanderthals and the very short Homo floresiensis of Indonesia. Yet the fossil record does not preserve further record of these particular varieties of humans after the Ice Age. (See the accompanying diagram above to understand how these people fit into biblical history.)

The people involved in building the tower of Babel were certainly not intellectually inferior evolutionary experiments in humanity. If their descendants generally displayed less technological prowess in the centuries following the dispersal from Babel, we can easily understand that isolated groups of people building new cultures for themselves would have required time to develop the sorts of artifacts today’s anthropologists equate with being highly intelligent.

Rather than supposing that evolving humans scattered around East Africa developed an artistic style that lasted for 500,000 years—dates based on a host of unverifiable assumptions—we instead propose that these intelligent people figured out how to make the tools they needed from the materials at hand and then refined the process somewhat, choosing to add their own artistic style. Based on biblical history and estimates of the duration of the Ice Age (from using the biblical history to realign the geologic record), we can infer that these people maintained their style for a matter of barely two centuries, but not for half a million years. Thus, biblical history makes sense of the tools in the rocks and explains the fact that from the beginning Homo erectus had a pretty smart head on his shoulders.