Flexi-feet: Did Some Humans Fail to Leave Them in the Trees?

Barefoot Boston Museum visitors reportedly reveal that some humans are not so far removed from ape-like ancestors as previously thought. While no humans have opposable big toes like apes, Jeremy DeSilva and Simone Gill report in the American Journal of Physical Anthropology that eight percent of 398 adult visitors who walked across a 20-foot long mechanized gait carpet made a footprint reminiscent of their ape-like forebears.

Plantar pressure sensors showed that some people place much heavier pressure on the outside of the sole and then hyperpronate the foot inward as they roll it forward. DeSilva and Gill surmised from video analysis that these 32 hyperpronators also had more flexibility in the middle part of their feet than normal for humans. They call the resulting bend a midtarsal break and believe it reflects common ancestry with apes.

“It was shocking. I mean, 80 years of research has argued that humans don't do this,” DeSilva said. However, two podiatrists commenting on the study report they’ve seen the midtarsal break but don’t call it by that name. Both orthopedic and anthropological literature reveals “considerable variation in human midfoot mobility.”1

An ape’s foot dorsiflexes at the midfoot as it rocks forward. Marked with triangle, this is a midtarsal break. Drawings by Elftman and Manter (1935), photos by D’Aouˆt et al. (2002), via American Journal of Physical Anthropology.2

As the human foot rocks forward, its fulcrum shifts from the heel to the ball of the foot. It is commonly held that the human midfoot remains rigid and, like this foot, does not have a midtarsal break. Drawings by Elftman and Manter (1935), photos by DeSilva, via American Journal of Physical Anthropology .3 The human foot has a dynamic design that adjusts continually during each part of a step. With the heel-strike, subtle shifts in the relative positions of bones in the foot-ankle complex unlock their rigid arrangement. The slightly loosened bones are able to slide into optimal positions to remain stable as the foot adjusts to bear the body’s weight despite uneven surfaces and continually changing force vectors. After midstance, the bones shift back into the more rigid arrangement, creating a lever to propel the body forward using the ball of the foot as a fulcrum.

All apes have a midtarsal break. “The absence of a midtarsal break has long been regarded as a derived feature of the human foot,”4 the authors write. By “derived feature,” they are stating their presupposition that midfoot rigidity evolved from a more mobile ape-like ancestral foot. “Humans possess a rigid midfoot that acts as an efficient lever during the propulsive phase of bipedal gait,” they explain. “Non-human primates, in contrast, have a more mobile midfoot that is adaptive for tree climbing.”5

As we have discussed previously, the human foot is well designed for walking upright. Our common Designer provided both apes and humans with a 26-boned foot. However, differences in the shapes and proportions of those bones, the ways connective tissues link them, and the interactions they have with the legs and pelvis are optimized for their respective modes of locomotion. While an ape’s foot is flexible in the middle and therefore well-suited for molding itself to tree branches, the human foot’s sturdy arches helps stabilize it as it stiffens during the last portion of each bipedal step. 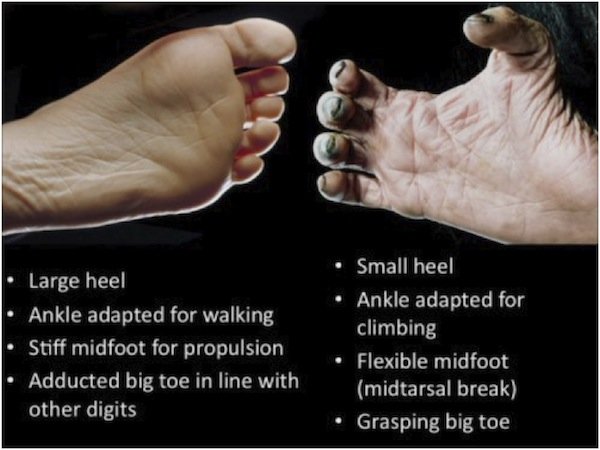 Ape feet (right) are suited for the arboreal lifestyle. Human feet (left) are well designed for walking upright on two legs. Image by DeSilva, via YouTube.6

The human foot’s dynamic design allows it to change characteristics at each moment of every step. Striking the heel on the ground while the lower leg and hip rotate inward prompts the subtalar joint (the joint between the uppermost ankle bone and the heel bone) to evert slightly. This loosens foot and ankle bones, allowing them to adjust to uneven surfaces and absorb impact. As the foot rocks forward, the entire lower limb reverses the direction of its rotation causing the subtalar joint to then rotate inwardly. This begins locking the bones of the foot into a more rigid arrangement. The ligaments, tendons, and tough plantar fascia that support the foot’s arch all contribute to this developing rigidity, providing stability as the foot propels the body forward.7 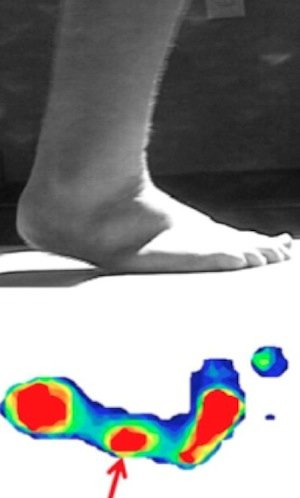 This person had the most pronounced midtarsal break in DeSilva’s study, with 20 degrees of dorsiflexion. Plantar pressure imaging shows that he placed a lot of pressure on the lateral part of the foot (indicated by the arrow) as he walked. Apes also have this sort of plantar pressure profile. Images by DeSilva and Gill, via American Journal of Physical Anthropology.8

DeSilva says that placing extra weight laterally before rolling the foot medially allows the supporting structures in the foot to relax. Flexi-footed people tended to be flat-footed or at least to have fairly low arches. They presumably therefore had some laxity in the ligaments that maintain the arches. DeSilva and Gill collected no anatomical data to explain their findings, but they do relate the flat-footedness of their subjects to standard ape anatomy, writing, “Apes lack both the long plantar ligament and a robust plantar aponeurosis that help stabilize the plantar aspect of the foot in humans.”9

DeSilva also associates elevated lateral midfoot pressure and midfoot mobility with australopithecine locomotion. He maintains that australopithecines experimented with various sorts of bipedal locomotion, the “best” evidence for australopithecine bipedality being the Laetoli footprints. (As discussed elsewhere10 the Laetoli prints regularly attributed to an australopithecine ape are consistent with ordinary human footprints.) DeSilva writes, “The data reported in this current study indicate that midfoot mobility in Au. sediba could have been caused by flatfootedness and/or excessive pronation, the latter of which is consistent with the postcranial fossils from Malapa cave.”11 However, DeSilva does not believe sediba walked like humans, ascribing to it a curiously strained version of bipedalism. He believes it swung its extended leg, with foot inverted, forward and then severely hyperpronated as it planted the foot and pushed off.12

In reality, the more sediba fossils are studied, the clearer it becomes that the extinct creature was suited for life as an ape. Humans are, on the other hand, designed for bipedal locomotion. Links between extinct apes like sediba and humans are evolutionary speculation.

The authors have no data on the functional impact of the midtarsal break on human gait. Nevertheless, DeSilva thinks flexible feet decrease walking efficiency. Since this would present an evolutionary disadvantage, he believes flexible feet disappeared from human history and then reappeared. University of Liverpool researcher Robin Huw Crompton, who also researches biomechanics and the presumed evolution of the foot, disagrees. Crompton believes most people’s feet can flex this way if necessary. He says midfoot flexion stabilizes the foot and is “important during a sudden change of speed.”

So which one of these researchers is correct? In terms of flexi-foot prevalence, we don’t yet know. More research is needed to determine the actual prevalence and functional significance of a more flexible midfoot. For that matter, even the specific anatomical subtleties that allow this degree of flexion have yet to be determined.

But in terms of the origin of the flexi-foot, neither researcher is correct. Both Crompton and DeSilva are limited by their presupposition that bipedal humans evolved from ape-like ancestors. In the first place, a higher degree of mobility in the midfoot does not mean the “flexi-foot” is an “ape-foot.” It is just a human foot that has a bit more “give” in a place where joints of limited mobility already exist. A similar example is seen in the discovery that tribesmen who spend their formative years walking up the trunks of trees develop greater-than-normal ankle mobility. In fact, human gait—whether influenced by anatomy, habit, deformity, or the wearing of shoes—is so individual that plantar pressure imaging can identify a person with up to 99.6% accuracy.13 Human feet with obvious midtarsal breaks are variations of human feet, not proof that humans evolved from apes. Many features of human anatomy vary, but those variations do not demonstrate the individuals possessing them are evolutionary throwbacks.

God created human beings on the same day as land animals, about 6,000 years ago. Our common Designer used many common designs. Those similar designs have differences suitable, for instance, for the differing modes of locomotion used by humans and apes. Similar designs do not demonstrate that humans evolved from ape-like ancestors but simply illustrate the wisdom of our Creator.