Fish Fins Are Not Fingers That Failed

Fish fingers were never on the evolutionary menu.

The evolutionary “Just So Story” of how fish turned into terrestrial tetrapods is still coming up empty. Geneticists from Geneva report they have found the necessary genetic switches to turn on limb development in fish. They had hoped to understand how fins turned into fingers but ultimately determined that they didn’t. The rays in fins, they decided, don’t correspond to fingers after all. Furthermore, the researchers did not discover any leg-making or finger-making genes in their fish. The Swiss study shows that it would take more than flipping a few genetic switches to get a fish to grow fingers. 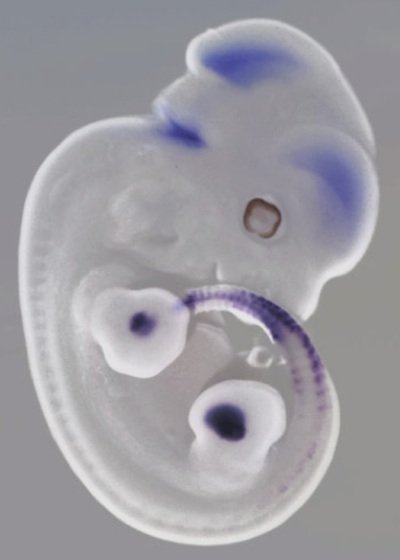 This mouse embryo has been provided with fish HOX genes that regulate fin development. Those genes did not trigger the development of digits (fingers or toes) in the mice. The fin-related genes were only expressed—as shown in purple—in the portion of the mouse limb buds associated with legs. Image: Denis Duboule University of Geneva; Federal Technical Institute, Lausanne; though LA Times.

For evolutionists, the belief that land animals evolved from fish has always been an article of faith. Missing from the evolutionary arsenal, however, are explanations for how fins turned into weight-bearing legs and divided themselves into limbs and digits.

Despite all the hype claiming the extinct lobe-finned fish Tiktaalik was the ancestor of us all, not even the discovery that Tiktaalik had a sturdy pelvis has come close to putting legs on the fish. Neither has it provided the fish with any sort of weight-bearing connection to support its evolution into a terrestrial tetrapod. Another fishy conundrum—the origin of fingers and toes—has also eluded those searching for a transitional pathway to terrestrial locomotion.

The Quest for Fish Fingers

Other scientists reported about a year ago that mouse regulatory (HOX) genes disrupted fin development in fish embryos, replacing the wrecked fins with distorted proliferating cartilage. As one researcher admitted, “Of course, we haven’t been able to grow hands.”1

While many evolutionists have assumed that fin rays and fingers were homologous, ancestrally related structures, the evidence is notably lacking. Not finding any clues in the fossil record, evolutionary geneticists hope to fill this gap in the path from fins to fingers. Joost Woltering, lead author of the Swiss fish story just published in PLOS Biology, explains, “To determine where the genetics behind this subdivision into ‘hand’ and ‘arm’ came from during evolution, we decided to closely compare the genetic processes at work in both fin and limb development.”2

HOX genes are master switches that turn groups of other genes on and off and thus control many aspects of embryonic development. University of Geneva geneticist Denis Duboule’s group has found that two clusters of HOX genes in fish and mice are quite similar.

Because these genes are expressed during embryonic development of fish fins, Duboule’s group thought fish genes would be associated with finger development in the mice, but they were not. When the fish genes are inserted into mouse embryos, they are not expressed in the part of the limb that forms fingers after all.

The geneticists nevertheless consider the discovery that fish and mice have similar regulatory HOX genes an evolutionary milestone. All that would be needed for fingers to evolve on a fish, they suggest, is a re-purposing of these regulatory genes. With the right genetic information to regulate, fish fingers should appear on the evolutionary horizon.

Fin Rays and Fingers Are Not Homologous

Homologies—anatomical, physiological, developmental, or genetic similarities—have since Darwin’s time been advanced as a way to trace evolutionary lineage. Many assume that such common designs prove common ancestry. Among the many problems with this line of thinking are the countless inconsistencies whereby homologous anatomical structures are produced by distinctly different embryologic or genetic mechanisms. Such is the situation with fish fin rays and fingers.

Many think fin rays were the evolutionary antecedents of fingers. The homologous HOX genes from fish were not even expressed in the portion of the mouse limb bud associated with fingers, however. Thus, the Geneva geneticists conclude that fin rays and fingers are not homologous.3

Embryonic recapitulation—the notion that vertebrate embryos pass through stages reminiscent of their evolutionary past—is a long discredited notion that is conveniently revived in various forms on a regular basis. The discovery that HOX regulatory genes govern the embryonic development of many organisms prompted evolutionists to dust off recapitulation theory a few years ago and try to see just what could be switched on and off by genetically modifying one species of embryo with the HOX genes from another.

“We share our genes with all vertebrates, and the genes have been used and reused and reused,” Duboule explains. “Embryonic development could offer a clue to such evolutionary tinkering. Our limbs, our arms and our legs, grow from the tip in embryogenesis – they don’t grow from the bottom.”

Because Duboule’s team found that two HOX groups are present in both zebrafish and mice, he says, “The basics of the regulatory mechanism are there in the fish. Everything is there, you just need to click it, and then it goes into the genes. If you have this complex of genes, on one side there is sort of a control tower for the forearm, and on the other side there is a control tower for the digits. This is what we call enhancers: regulatory sequences which control gene expression. We went into fish, and to my big surprise I must say, the two control towers are there.”

Duboule thought the key to clicking on both limb and finger development in fish was at his fingertips, but it wasn’t. “We realized that by taking either the one on the right or the one on the left, we got the same result: They both made forearms,” he says. “So there is no way we can see, so far, that these control towers work in making digits. Our conclusion, therefore, is that everything you need to make digits is there in the fish, but it’s not properly used.”

Duboule believes the regulatory mechanism shared by fish and mice evolved early. Millions of years later the limb-and-finger-making genes presumably evolved and got switched on in terrestrial animals. “Altogether, these results suggest that our digits evolved during the fin-to-limb transition by modernizing an already existing regulatory mechanism,” he says. Woltering adds, “A good metaphor for what has probably happened would be the process of ‘retrofitting,’ as is done in engineering to equip outdated machine frames with new technology. Only, in this case, it was a primitive DNA architecture which evolved new ‘technology’ to make the fingers and toes.”4

Fish remain fish, and rodents remain rodents. And the evolutionary quest for a terrestrial transition still comes up empty.

In trying to explain the origin of the genetic information to produce fish fingers in light of the expulsion of fish fins from their traditional role as finger homologues, Tiktaalik paleontologist Shubin commented, “Maybe the art of digits involves not the evolution of a whole new set of control mechanisms, but maybe making them active in the patterning of the new structure.” There seems to be a good deal more artful imagination than science in this wishful assertion.

Where did the genetic information to manufacture fingers and toes come from? For that matter, where did the homologous HOX regulatory genes shared by the fish and mice come from? From the evolutionary point of view this remains a complete mystery. Indeed, finding that fish and terrestrial animals use similar genes to regulate the other genes they possess does not show how they got any of those genes or demonstrate that they evolved from a common ancestor.

The evolutionary quest to march an extinct lobe-finned fish up onto land and to have it grow fingers and become a non-fish remains without any support from experimental biology. Living lobe-finned fish like lungfish—which even breathe air—and coelacanths are still fish. They are fish that function quite nicely in their environments. Like Tiktaalik, they possess no skeletal transitions toward terrestrial life.

The only genetic re-tooling in evidence here has nothing to do with re-purposing an old design. God, like a wise, all-knowing, and all-powerful engineer, used many common designs in His creation. He used similar genes to accomplish similar functions in many different organisms. HOX genes that switch on the genes governing development of fins or limbs are an example. Genes to regulate the proper expression of other genes are part of the finely tuned intricate design of each organism. Common genes point to our common Designer, not a common ancestor.

Nothing in biology demonstrates how the genetic information to produce either fins or legs or anything else could come into being through spontaneous natural processes. Furthermore, biological observation reveals that animals continue to reproduce and vary only within their created kinds as God designed them to do. Thus fish remain fish, and rodents remain rodents. And the evolutionary quest for a terrestrial transition still comes up empty.