Power Swimming up the Evolutionary Ladder

Marine myoglobin really packs it in.

The marine medals for diving go to animals like elephant seals and sperm whales, which can remain underwater for 90 minutes or more.1 Dolphins and other whales routinely stay under for 20 minutes. How do they do it?

The “mammalian diving reflex,” which slows the heart rate and shunts blood to the brain, heart, and muscles when submerged, operates in all mammals and facilitates these impressive feats. But champion divers have an edge—an extraordinary capacity to store oxygen in their muscles. This oxygen is stored in a molecule called myoglobin. Michael Berenbrink and colleagues at the University of Liverpool have found that something special about the myoglobin of champion divers equips them for their record setting performances.

Myoglobin, like hemoglobin, is a molecule designed to carry oxygen. Hemoglobin, which is packed into red blood cells, carries oxygen as blood circulates through the body. Myoglobin, packed into mammalian muscle cells, holds an extra oxygen supply for muscles to use when they have to work harder or longer than the oxygen supply from circulating blood can accommodate. 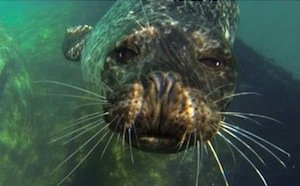 Densely packed myoglobin stores much oxygen, enabling animals like the seal to hold their breath for extended dives. Image from BBC.

The sperm whale doesn't have to rush lunch. One of nature’s greatest mammalian divers, the sperm whale is equipped by its highly charged muscular myoglobin to spend 1–2 hours underwater before it must come up for air. Image from BBC.

Champion mammalian divers tend to have a great deal more myoglobin packed in their muscles than most terrestrial mammals and mammals that don’t go in for diving. But packing in more myoglobin is tricky business. If myoglobin molecules are too tightly packed, they stick together in a form that prevents the efficient storage and transfer of oxygen.

“At high enough concentrations,” Berenbrink explains, proteins “tend to stick together, so we tried to understand how seals and whales evolved higher and higher concentrations of this protein in their muscles without a loss of function.”

Myoglobin is a protein, a long chain of amino acids. This amino acid chain folds into a somewhat globular shape, forming a nest for oxygen bound to an iron atom. Variant forms of myoglobin contain different amino acids at certain points. Some amino acids are neutral, and some have a positive or negative charge. The amino acids positioned at the surface of the myoglobin molecule determine whether the molecule is neutral or positively charged. 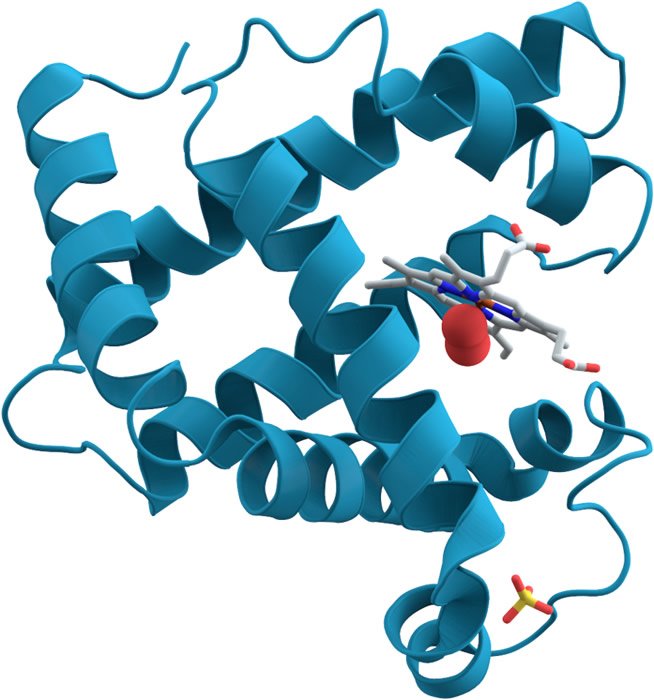 This three-dimensional model of a myoglobin molecule shows its roughly globular geometry. The amino acids on the surface may be neutral or charged, affecting how densely the molecules can be packed together. Myoglobin contains iron, which enables it to carry oxygen (shown in red). Image by Splette, via Wikimedia Commons.

“We studied the electrical charge on the surface of myoglobin and found that it increased in mammals that can dive underwater for long periods of time,” Berenbrink explains. “We were surprised when we saw the same molecular signature in whales and seals, but also in semi-aquatic beavers, muskrats and even water shrews.”

“Like the similar poles of a magnet, the [positively charged] proteins repel one another.” Berenbrink says. “In this way we think the animals are able to pack really high concentrations of these proteins into their muscles and avoid them sticking together and clogging up the muscles.” Thus, the myoglobin of many marine mammals is fine-tuned for long underwater stays.

Mammals with the most highly charged myoglobin, the researchers found, were seals, walruses, whales, dolphins, beavers, and muskrats. Obviously this group includes both marine mammals and terrestrial mammals that have impressive submergence times. Beavers and muskrats can stay underwater for around 15 minutes. Semi-aquatic mammals that spend less time underwater, such as star-nosed moles and water shrews—animals that come up for air in less than a minute—have lots of positively charged myoglobin too, but their molecules are less charged. 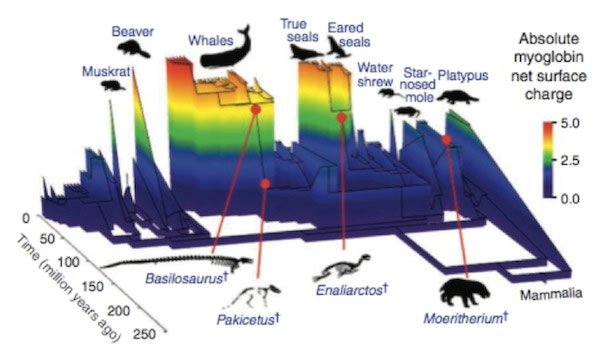 Aquatic and semiaquatic mammals ranging from whales to beavers are equipped with charged forms of myoglobin that increase their oxygen-carrying capacity. Researchers extrapolate myoglobin characteristics of living animals back through time along their presumed evolutionary lineages in an attempt to trace the evolution of myoglobin and its role in the presumed transition between terrestrial and aquatic life. Image by S. Mirceta et al., “Evolution of Mammalian Diving Capacity Traced by Myoglobin Net Surface Charge,” Science 340 (June 14, 2013): 1234192, doi:10.1126/science.1234192.

Not surprisingly, the researchers in this study sought the evolutionary underpinnings and implications for their discovery. “By mapping this molecular signature onto the family tree of mammals, we were able to reconstruct the muscle oxygen stores in extinct ancestors of today’s diving mammals,” Berenbrink explains. “It also allows us to estimate the dive times of the ancient ancestors of whales. We can look at the fossils and predict the dive times they had.”

The researchers also presume that terrestrial animals with high levels of myoglobin evolved from aquatic ancestors as they mutated away the charge on their myoglobin. They extrapolated from actual data about the myoglobin of living animals to the evolutionary lines of animals that postulate an aquatic ancestor. Based on the assumption that each kind of animal evolved from more primitive kinds, they made predictions about how long each ancestral animal could have held its breath and whether it was truly aquatic or not. Thus, even though elephants and echidnas do not have myoglobin suited for aquatic life, their evolutionary ancestors presumably did.

“This finding illustrates the strength of combining molecular, physiological and evolutionary approaches to biological problems and, for the first time, allows us to put ‘flesh’ onto the bones of these long extinct divers,” says Berenbrink. “We are really excited by this new find because it allows us to align the anatomical changes that occurred during the land-to-water transitions of mammals with their actual physiological diving capacity,” Mirceta explains. Knowing how long they could hold their breath “is important for understanding the prey items that were available to these extinct animals and their overall importance for past aquatic ecosystems.”

Because living animals with charged myoglobin allegedly come from several different evolutionary lineages, the researchers conclude that convergent evolution produced this charged form of myoglobin, which evolved multiple times over millions of years to solve the problem of giving mammals access to the depths.

Moreover, the researchers speculate back beyond even those extinct animals represented in the fossil record. They describe “the first evidence of a common amphibious ancestor of modern sea cows, hyraxes and elephants,” presumably holding its breath on the strength of evolving charged myoglobin while swimming “in shallow African waters some 65 million years ago.”

Application of this discovery to the evolutionary past is based on conjecture.

Correlation of myoglobin characteristics with the lifestyles of living animals has provided a good clue about how myoglobin works. However, application of this discovery to the evolutionary past is based on conjecture. The idea that modern animals evolved from simpler kinds of ancestors lacks experimental support. Thus, the hypothetical common ancestor of elephants, hyraxes, and manatees—and speculation about the nature of its myoglobin—are but an imaginary evolutionary construct to satisfy the needs of the evolutionary tale.

Likewise, biological science has not demonstrated that random natural processes can produce novel genetic information to enable evolution of new, more complex kinds of animals. And much as we might like to know how long an extinct animal could hold its breath, once the authors’ conclusions leave the here-and-now and the how-it-works to speculate about the unseen-and-untestable then-and-gone, they are basing their conclusions on experimentally unverifiable worldview-based assumptions.

Many important proteins and other biochemical molecules are found in more than one kind of living thing. We would expect this in a world full of animals and plants designed by the same Creator. Typically, the specific versions of complex molecules vary somewhat in different kinds of animals. (Small variations also occur even within individual members of the same species.) Evolutionary scientists tend to interpret these biochemical similarities as evidence of evolution. Creation scientists, on the other hand, interpret these same facts as examples of our common Designer’s handiwork. The many kinds of animals we see in this world reproduce and vary only within their kinds, an observation consistent with the biblical account of the creation God made.

Varieties of myoglobin with features suited to the highly variable needs of these animals that spend most or all of their lives in the water is an example of the marvelous design of our intelligent Creator.

Previous Article Flexi-feet: Did Some Humans Fail to Leave Them in the Trees? Next Article Battle for Babies in the Lone Star State