Dr. Sylvia Gonzales of John Moores University in Liverpool, England reported in 2005 about the discovery of 269 footprints preserved in volcanic ash in the Valsequillo region of central Mexico.

Approximately 60% of the prints were identified as human, with 36% of these classified as children’s because of their size. The remaining prints included dogs, cats and animals with cloven feet (possibly deer, camels or cattle).

The footprints were made during volcanic eruptions and a massive flood 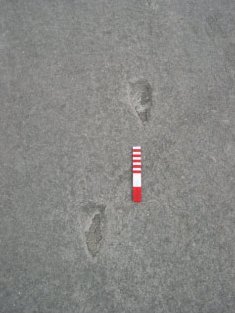 These footprints are in a left-right sequence signifying a human stride pattern (from Toluquilla quarry).

Apparently, the footprints were made shortly after the deposition of the volcanic ash and were preserved as trace fossils by the fast deposition of fine-grained, water-deposited sediment. The volcanic ash and many layers of overlying water deposited sediment then quickly hardened, preserving the footprints in exquisite detail. No surprise for biblical creationists so far.

The researchers were able to classify many of these footprints as human because they demonstrated several characteristics unique to man, including:

Evolutionists are unhappy with 40,000-year-old human footprints in Mexico 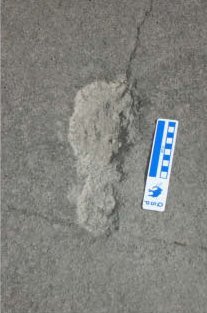 What has drawn a lot of attention to this report is that the footprints were dated by optically stimulated luminescence (OSL) to be 40,000 years old. Naturally, this age is unacceptable to biblical creationists who will see these footprints, and the conditions surrounding their formation, as compelling evidence of Noah’s Flood over 4,000 years ago. But as we shall see, a 40,000-year age for human footprints in Mexico is also a problem for most evolutionists.

The current prevailing idea, known as the “Clovis first” model, dictates that the Americas were first colonized by humans (known as the Clovis culture) between 11,500 and 12,000 years ago. It is further believed that these people arrived in North America from Siberia by means of the Bering land bridge, at the end of the most recent ice age. Thus there has been a lot of resistance from anthropologists to Gonzales’ 40,000-year age for the footprints in Mexico.

Nonetheless, Dr. Gonzales and her colleagues seem quite pleased with the idea that Central America and especially Mexico might be the cradle of human occupation in the Americas, and so much the better if these humans preceded those in North America by nearly 30,000 years. They have even set up a special website (www.mexicanfootprints.co.uk) touting their discovery and have titled it “The Oldest American? Footprints from the Past.”

Redating to the rescue?

Fortunately for evolutionists, virtually any troublesome date can be “corrected” by simply redating the errant specimen by the same or other dating methods until the desired age is achieved. In a recent issue of Nature (Vol. 438, 1 Dec. 2005), Dr. Paul Renne and coworkers at the Berkeley Geochronology Center in Berkeley, California, USA have done just that. These investigators redated the pesky Mexican footprints using the 40Ar/39Ar radiometric dating method and have concluded that the age of the volcanic ash in which the footprints were found is really 1.3 million years +/- 0.03!

The human footprints can’t be human—they are just “markings”!

Read this example of evolutionary logic for yourself:

If the markings are hominid foot prints, they would be most likely to be made by a hominid that existed before Homo sapiens and we consider such a possibility to be extremely remote. We conclude that the identification of any of these features as syndepositional hominid footprints is erroneous.

Incredibly, the authors make no attempt to refute the evidence that these are in fact human footprints (other than their presumed “age”) and fail to even speculate as to what these “markings” are if not human footprints. Neither do they say if the footprints of the dogs, cats and cattle found with them are also mere markings.

Evolutionists in an “absolute” dating war!

So now evolutionists are engaged in a dating war, if not an anatomical war, over the “Mexican markings.” Dr. Gonzales and her colleagues at UK’s University of Nottingham and the NERC Isotope Geosciences Laboratory have apparently accepted the challenge and are engaged in further redating of their own (it would appear that two can play this dating game). They have even set up yet another website to report their progress (http://www.geog.nottingham.ac.uk/~metcalfe/index.htm). This is probably made necessary by the fact that it is difficult for even evolutionists (to say nothing of creationists) to get their research published in peer-reviewed journals when it runs counter to prevailing evolutionary dogma.

Specifically, they are employing a variety of dating methods, including several isotopic methods such as Accelerator Mass Spectrometer radiocarbon dating (AMS), Electron Spin Resonance dating (ESR), Argon dating and Uranium series dating, as well as pollen and diatom analysis and, of course, Optically Stimulated Luminescence Dating (OSL). One can hardly wait until the final “absolute” date for the Mexican “markings” is agreed upon by all concerned regardless of their biases—but don’t hold your breath.

Since evolutionists are dead certain that there were no humans around 3.5 million years ago, how did they deal with the Laetoli footprints? Rather than conclude that they were just “markings,” these footprints were declared to have been made by an ape-like creature that had feet identical to modern man and who walked in precisely the same way as modern man. Most evolutionists believe that the extinct ape Australopithecus afarensis (commonly known as “Lucy”) made these footprints even though there is compelling evidence that apes of this type were long-armed knuckle walkers with heavily muscled apelike feet similar to that of a pygmy chimp (J. Stern & R. Sussman, Am. J. Phys. Anthropology 60:279–212, 1983).

Pity the evolutionists: they can’t force ape feet into the Laetoli footprints and they can’t pull human feet out of the Mexican foot prints.