Sediba fossils shuffle the deck of diversity but fail to connect the evolutionary dots.

Australopithecus sediba, which was discovered in 2008 in South Africa’s Malapa Cave, resembles other australopithecine apes, especially Australopithecus africanus, according to a set of six new articles just published in a special issue of Science magazine. The fossils do, however, have enough differences to be considered a separate species. (Some critics have suggested that sediba and africanus were the same species.) The new analyses cover the mandible, teeth, thorax, vertebrae, and upper and lower limbs. In September 2011, as we reported in “Sediba with a Little Sleight of Hand,” articles covering the skull, hand, pelvis, foot and ankle as well a report about the fossils’ age created a stir among evolutionary paleontologists. 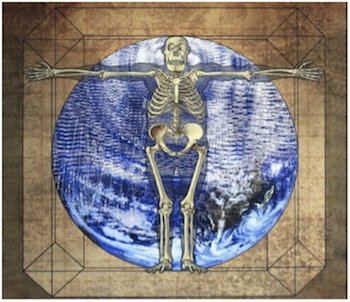 This painting commissioned by Lee Berger, Australopithecus sediba’s discover, sums up Berger’s desire to show that sediba is the oldest known human ancestor. While the conical rib cage smacks of ape-ishness and the brows look a little heavy, it otherwise appears that Berger may have provided painter John Gurche with a human skeleton as a model rather than the kind of skeleton actually described for sediba. But then this entire evolutionary enterprise is an article of faith and imagination, anyway. Sadly, pictures like this do make an impression, suggesting that sediba really was a mosaic more human than ape. Image: painting by John Gurche, through www.theverge.com

Sediba’s discoverer Lee Berger and colleagues maintain now, as then, that Au. sediba is a mosaic that includes enough subtle human-like features to secure sediba’s place in human ancestry. And though they aren’t sure where, they are certain that place pre-dates other candidates for the oldest human ancestor.

Though the new analyses do a fine job of showing how truly “ape” sediba was, Berger and colleagues go to great lengths to show that sediba had begun the evolutionary trip toward human-ness. Much of this effort involved justification for their claim that sediba was bipedal. After all, the cardinal characteristic modern evolutionists demand in human ancestors is the ability to walk around on two legs, facing the world with head held high and somehow morphing themselves a human brain as a consequence.

The problem is that the bipedality claim was made on shaky ground, such as imaginative reconstruction of the missing parts of the pelvis, as we discussed previously. These anatomic analyses—which hail sediba’s supposed mosaicism but really just show sediba was a variety of ape—also demonstrate that sediba could not have truly walked upright. Other evolutionary researchers have suggested that Lucy (Australopithecus afarensis)—a competitor in this race to the root of the human evolutionary tree—did not have a human sort of bipedalism, but a different “australopithecine bipedalism” altogether. (In other words, the tree-swinging arboreal ape wasn’t really bipedal. See A Look at Lucy’s Legacy and Lucy, the Knuckle-Walking “Abomination”? to learn more.) But sediba would not have even been able to manage the sort of gait proposed for Lucy.

The gait that Berger and colleagues proposed in order to reconcile the anatomical features that failed to fit the bipedal profile with their claim of bipedality is called a “hyperpronating” gait. Unknown among any known animal—living or extinct—and certainly unknown among any normal human being, the gait is so awkward it would have strained the knee, lower back, and muscles crossing the knees and hip joints.1 It is so unstable it would have been akin to trying to walk on ice skates. In fact, it is so bizarre that one paleontologist suggested an animal might walk that way after a chronic injury, and so absurdly humorous that paleontologists are calling it “provocative.”2

On the other hand, the special issue of Science devoted to sediba shows that it was well-designed for climbing and swinging. It was an ape. No amount of wishful thinking can make it the “transitional form” the researchers claim that it is. Nevertheless, coauthor Darryl de Ruiter of Texas A&M exults, “Everywhere we look in these skeletons, from the jaws on down to the feet, we see evidence of the transition from australopith to Homo. Everywhere we see evidence of evolution. Au. sediba looks more like Homo than any other australopith known and for this reason represents an excellent candidate ancestor for the genus Homo.”

Well, not even the evolutionary paleontologists are in agreement about these claims, for several reasons. Additionally, we would add that there is no evidence that humans evolved from ape-like ancestors in the first place. Evolutionary researchers—whether involved with sediba or Lucy or some other candidate for hominin status—begin with the assumption that humans evolved from ape-like ancestors. Then they interpret any mixture of traits, however subtle or even imaginative, as evidence of evolutionary transitions-in-progress. Alternatively, however, by rejecting the presupposition that humans could only exist by evolving, it becomes clear that variations among apes—including extinct ones like the australopithecines—demonstrate ape diversity. But those variations do not demonstrate that evolution happened.

Read more about the new “Sediba special report” next Wednesday in our own Answers in Depth article, “Sashaying to the throne.”