Turtle in the Gap

The origin of the turtle shell has long been a bone of contention among evolutionists. The latest fossil to make an appearance in this saga is the South African Eunotosaurus, which at a purported age of 260 million years is being billed as the transitional turtle connection to other reptiles.

Embryologically, the parts of a turtle shell form separately. The ribs become broader, flatter, and cross-sectionally T-shaped. The neural spines of the vertebrae broaden. Bony plates develop around the edge of the developing carapace. Finally, the parts fuse. Some evolutionists argue that turtle evolution must have followed this pattern. Others believe the shell evolved as external bony scales fused with internal ribs. The two most recent additions to the turtle evolution tale are claimed as evidence for the evolutionary pathway “predicted” by embryology. “It was very contentious,” says Tyler Lyson, lead author of “Evolutionary Origin of the Turtle Shell” published in Current Biology. “For the past 200 years, there’s been a lot of ink spilled on the question.” 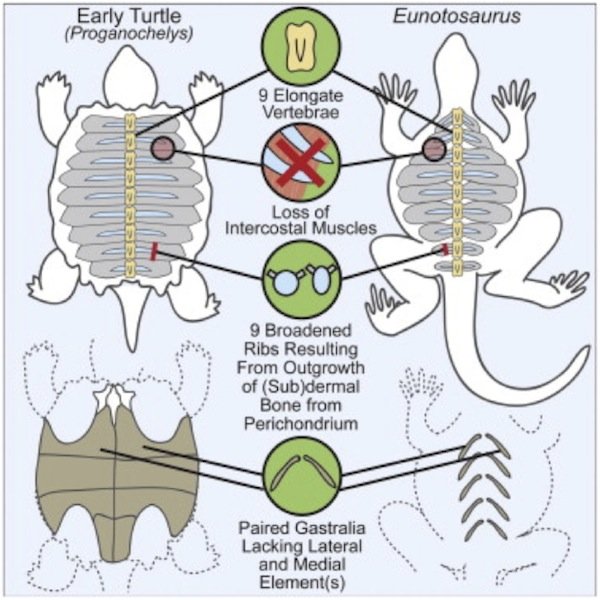 Though Eunotosaurus lacks a well-developed plastron and has incomplete fusion in the broad ribs comprising its carapace, it shares many features in common with the fully shelled fossil Proganochelys and with many modern turtles. Though evolutionists believe they have found a transitional form, what they have found is an extinct variety of turtle. Image: www.cell.com

Unlike other armored animals, a turtle’s protective covering consists of fused bones, not external scales. A turtle shell is a fusion of vertebrae, ribs, and pelvic bones. The carapace—the convex upper shell—is a fusion of broad flattened ribs and vertebrae with dermal bone. The shell is typically covered with scutes made of keratin, but because these scutes have a bony base in the dermis (the living part of the skin), they are also called osteoderms. The plastron is the flatter shell covering a turtle’s underbelly. Among living turtles, the leatherback marine turtle lacks a solid carapace, and even among turtles with hard shells, there are variations.

Until recently every known turtle fossil looked like today’s turtles, essentially unchanged for 200 million years (according to evolutionary reckoning). There is no anatomical structure similar to a turtle shell in other animals to help evolutionists guess at evolutionary relationships. A confusing array of anatomical, fossil, and genetic data has left turtles in a clade by themselves, without a clear-cut evolutionary ancestor. 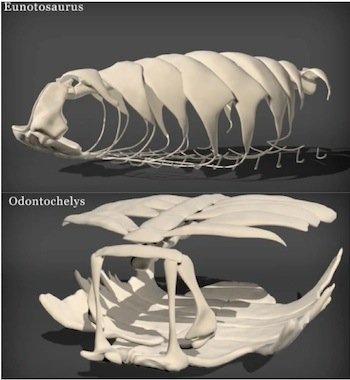 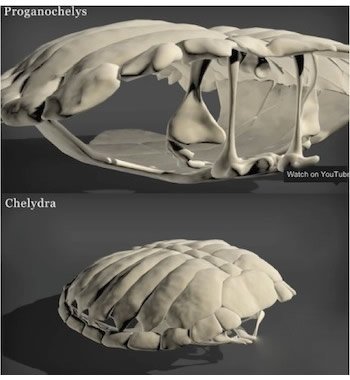 This sequence is from an animation prepared to show how shells could have gradually evolved in these four varieties of turtles. The Eunotosaurus lacks a plastron but has ribs and vertebrae typical of turtles. Odontochelys is thought to have been a marine turtle and has a well-developed plastron; the broad ribs of its carapace are unfused. Proganochelys has both plastron and carapace typical of most modern turtles. Chelydra is a modern snapping turtle. The number and shape of the broad flat trunk vertebrae and ribs, seen in all these fossils, suggests that all are turtles but does not demonstrate evolutionary transitions, only variation. Images by Tyler Lyson et al., via Popular Science.1

Evolutionary paleontologists trying to piece together the puzzle of the turtle shell also debate whether the turtle evolved on land and then lost its hard shell to produce some marine turtles or, alternatively, made its evolutionary appearance in the water and crawled out onto land as the shell evolved. Proganochelys, with a heavy shell, short toes, and a spiked tail—dated 210 million years by evolutionists—appears to have been terrestrial. But the turtle’s evolutionary origin shifted to the sea in 2008 with the discovery of Odontochelys. Said to be 220 million years old, the toothed Odontochelys had a well-developed plastron but no fused carapace. Modern leatherback turtles also lack a fused carapace. Nevertheless, its discoverer argued that its broad ribs but lack of a solid carapace made Odontochelys a transitional turtle, “an ideal missing link for turtle evolution,” supporting the embryologic theory.

This approach to coming up with an origins story is of course just a version of the fallacious “ontogeny recapitulates phylogeny” mantra. The existence of animals, apparently fully functional ones, with various traits resembling an embryologic stage is no proof that embryologic development retraces an evolutionary pathway.

The latest fossil relevant to the turtle story is Eunotosaurus africanus. Dated 260 million years, Eunotosaurus now takes its place as the earliest known turtle. Lyson and colleagues report Eunotosaurus—like modern turtles, Proganochelys, and Odontochelys—had 9 elongated trunk vertebrae, 9 broad T-shaped ribs that were touching, and no evidence of intercostal muscles between them.2 Based on the fossilized marks of fibers that connect muscle to bone, the muscles that would have assisted its breathing appeared to have been located beneath these ribs,3 as seen in modern turtles. Unlike modern turtles and Odontochelys, Eunotosaurus lacked broad protrusions from its vertebral bones. No fused plastron was evident.

Lyson considers the broad ribs to be the equivalent of a primitive carapace. In the absence of broad vertebral protrusions and external scales, he considers Eunotosaurus as a sort of proto-turtle at the base of an evolutionary path dictated by turtle embryology. “The first thing we see in a developing turtle embryo,” he says, “is the broadening of its ribs, followed by the broadening of its vertebrae, and finally by the acquisition of the osteoderms along the perimeter of the shell.”4 Lyson believes that Eunotosaurus and Odontochelys, because they conform somewhat to turtle embryologic stages, vindicate his version of the turtle evolutionary story.

“The turtle shell is a complex structure whose initial transformations started over 260 million years ago in the Permian period. The shell evolved over millions of years and was gradually modified into its present-day shape,” Lyson explains.5 “Eunotosaurus neatly fills an approximately 30-55-million year gap in the turtle fossil record. There are several anatomical and developmental features that indicate Eunotosaurus is an early representative of the turtle lineage; however, its morphology is intermediate between the specialised shell found in modern turtles and primitive features found in other vertebrates.”6 Lyson therefore believes “Eunotosaurus is a good transitional fossil which bridges the morphological gap between turtles and other reptiles.”7

Embryology reveals a continuous sequence of steps that successfully produce a fully developed organism. It is only natural that evolutionists trying to devise a story to construct a step-by-step evolutionary just-so-story for an animal’s origins look to embryology for guidance. Embryology, however, is observable; the evolution of complexity is not. And the epic difference is that the developing embryo already possesses the genetic blueprint for all the structural steps through which its body passes. A hypothetical evolutionary ancestor would not possess the information for the next step (or for the infinite number of next steps required in a random trial-and-error process), and there is no observable mechanism in biology to show how it could acquire the information for increasing complexity. Mutations lose genetic information; they do not add the complexity needed to even incrementally produce a more complex creature.

What these turtle fossils reveal is not a series of non-turtles evolving into turtles but just varieties of turtles.

The biblical account of origins fits observable biology. God created all “kinds” of animals about 6,000 years ago. Many creation scientists suspect the original creation included at least two kinds of turtles. Mutations, reshuffling of the genetic information in those turtles, natural selection, and other ordinary genetic processes explain the variations and even loss of some traits in their descendants. Loss of genetic information, not evolutionary gain, explains the biodiversity we see in turtles today and in the fossil record, where some extinct and some modern types of turtles were buried during the global Flood.

Previous Article Defining Marriage—Supreme Court v. Sovereign God Next Article Flexi-feet: Did Some Humans Fail to Leave Them in the Trees?