Did Snakes Shape Our Brains?

Grandma Primate, What good eyes you have! “The better to see snakes,” evolutionists suggest.

The Snake Detection Theory has been one of more controversial ideas about how the brains of primates and eventually people evolved. The theory recently got a neurobiological boost from the discovery that macaque monkeys that have never even seen a snake have an intense rapid neurological response to snake pictures, suggesting they are hard-wired to detect and avoid snakes. 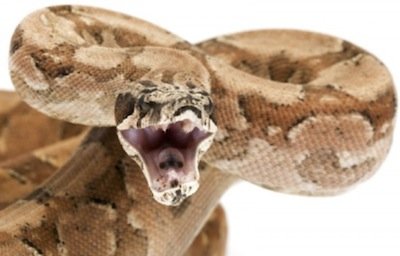 Snake-sensitive neurons in a visual-relay center of macaque brains outnumbered neurons that responded to other pictures. These neurons also elicited stronger and more rapid responses. Image from iStockphoto/Thinkstock, via Science.1 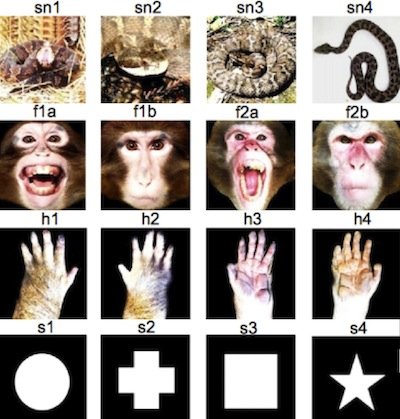 These are the pictures shown to macaques while electrodes in their brains monitored the responses of neurons thought to relay threatening visual images. Forty percent of the 91 neurons were highly responsive to snake pictures, with face-sensitive neurons coming in second. Image Quan Van Le et al., via PNAS.2

A joint study by behavioral ecologist Lynne Isbell—who came up with the Snake Detection Theory of mammalian and primate brain development—with a team of Japanese and Brazilian neuroscientists asserts that snake-sensitive neurons in the monkeys’ brains are evidence for “the growing evolutionary perspective that snakes have long shaped our primate lineage.”3 The authors of the study published in the Proceedings of the National Academy of Sciences write, “Our findings are unique in providing neuroscientific evidence in support of the Snake Detection Theory, which posits that the threat of snakes strongly influenced the evolution of the primate brain. This finding may have great impact on our understanding of the evolution of primates.”4

More Than Meets the Eye

Monkeys raised behind high walls, and therefore never exposed to snakes, were the subjects for the study. This species, in the wild, would live in environments inhabited by snakes. Neurobiologists implanted electrodes in the monkeys’ brains to see what sort of images evoked neuronal responses. The monkeys were shown images of angry and calm monkey faces, monkey hands, simple geometric shapes, and snakes. The neurobiologists monitored 91 neurons in the pulvinar—a subcortical portion of primate brains thought to be involved in relaying threatening visual images.5

Snakes, whether coiled or elongated, elicited intense, rapid responses from the largest proportion of the monkeys’ neurons—over 40%. Reaction time of the “snake-best” neurons also outstripped all others, firing 15 to 25 milliseconds faster than neurons responsive to other stimuli. The simple shapes were the least provocative. The neuronal runner-up to “snake-best” were “face-best” neurons, with about 28% responding to angry monkey faces.6

“Where Have I Heard That Before?”

Snake Detection Theory, proposed in 2006 by University of California Davis anthropologist Lynne Isbell, was later publicized in her book The Fruit, the Tree and the Serpent: Why We See So Well. Isbell says that constricting snakes were “the first and most persistent predators”8 faced by early rodent-like mammals as they evolved together 100 million years ago. A second “pulse of selective pressure” from the evolution of venomous snakes exerted itself 40 million years later and favored the survival of early primates with superior vision. While snakes are a threat to burrowing ground-based animals as well as primates, those animals often rely on other senses to detect danger. Isbell maintains that the forward-facing eyes of primates and the devotion of a large portion of the primate brain to vision evolved to deal with this danger, making snakes the primordial shaper of the human brain.

Speaking of the chance to team up with neurobiologists to look for evidence to support her theory, Isbell says, “I don't do neuroscience and they don't do evolution, but we can put our brains together and I think it brings a wider perspective to neuroscience and new insights for evolution.”9 The part of the monkey brain selected for study has no corresponding homologous structure for processing visual images in non-primates and is therefore considered a structure that evolved only in primates. “We're finding results consistent with the idea that snakes have exerted strong selective pressure on primates,” she adds. “I don't see another way to explain the sensitivity of these neurons to snakes except through an evolutionary path.”10

Vision is the primary way primates evaluate their environments, relying more heavily on sight than on any other sense. The position and structure of primate eyes as well as “complex and energetically costly neural components”11 devoted to vision “demands an adaptive explanation,”12 Isbell, Nishijo, and colleagues write. The team hypothesized that “primate-specific regions of the pulvinar evolved in part to assist primates in detecting and thus avoiding snakes.”13 They declare the high proportion of snake-sensitive neurons in the pulvinar as “evidence in support of the snake detection theory.”14

Not all primates have vision as sharp as that of the monkeys in the study. Isbell believes this variation is also the result of snake selection. She says that primates in Madagascar, with no endemic venomous snakes, only faced selective pressure from constrictors and therefore “don't have a fovea, a pit in the retina that allows our central vision to be very sharp so that we can see fine detail. So their visual acuity isn't the best. It's still better than other mammals’; it’s just not as good as ours.” She believes that venomous snakes in Madagascar would have prompted them to evolve better vision. Seeing snakes is an important survival skill for primates, Isbell explains. “It's important to be able to see them before they see us so we can stop in time to do that acrobatic jumping away.”

All conclusions about the monkeys’ evolutionary past were mere speculation based on the unverifiable and unobservable presumptions of molecules-to-man evolution.

Isbell cautions that their study addressed neuronal responses but not the emotions associated with those responses. Fear may be a subject for another day. “People want to connect what we’ve done with fear and phobias, but in fact we haven't addressed emotion in this study,” Isbell says. “We've only looked at vision. So we've looked at the very first step. How does the image of the snake get into our brains to begin with?”

Vision-dependent animals—like these monkeys—that must contend in the wild with threats like snakes would naturally be more likely to survive if they are able to see snakes in time to react. Thus the development of a population of monkeys wired to see snakes as a threat and respond quickly makes sense in terms of ordinary selection pressures on the species. But natural selection acting on a species of monkeys has nothing to do with millions of years of mammalian and primate evolution.

The only subjects of this study were one living species of monkey. All conclusions about the monkeys’ evolutionary past were mere speculation based on the unverifiable and unobservable presumptions of molecules-to-man evolution. Rodent-like mammals and snakes appear at about the same place in the fossil record. The authors interpret the fossil record in accord with worldview-based biases, accepting without question the idea that mammals evolved from other kinds of animals millions of years ago at the same time as snakes. The fossil record, however, is not the record of when various forms of life evolved. Much of the fossil record, rather, is the record of the order in which organisms were catastrophically buried as the global Flood of Noah’s day, less than 4,500 years ago, overwhelmed various habitats.

Thus the authors have learned something interesting about the brains of macaques. Perhaps God equipped monkeys with the neurological equipment to recognize dangers in the world cursed by mankind’s sin long ago. In any case, however, the discovery is consistent with a possible history of a fairly specific selection pressure on macaques. It can tell us nothing about the evolutionary history of mammals, primates, or people. No biologists—not even neurobiologists or behavioral ecologists like those who did this research—have ever observed animals evolving into new, more complex kinds of animals.

What we observe in biology is consistent with the Scriptural truth that God created all kinds of animals as well as the first two human beings to reproduce and vary only within their created kinds. He did so during the space of two days about 6,000 years ago, according to the Bible. Primates generally have good visual acuity and brains equipped to deal with the visual images their eyes collect, not because they had to evolve that anatomy, but because that’s how God designed them.