If a Parasaurolophus daddy sang bass, little brother was able to join right in there.

“Dinosaur Joe,” the most complete Parasaurolophus specimen yet discovered, has revealed that this dinosaur’s head crest began forming early in life. The intimate association of the bizarre head crests in hadrosaurid dinosaurs with the upper respiratory system is confirmed in this comparatively diminutive juvenile. Analysis of the acoustical possibilities, when “heard” alongside the sound that an adult could have produced, suggests that the Parasaurolophus baby may have added a high-pitched voice to the land before the time of dinosaur extinction.

“Little” Joe, a juvenile Parasaurolophus found in Utah’s back country by a high school student during a summer enrichment program, was about six feet long when it was buried in Cretaceous sediment. Adult Parasaurolophus were about thirty feet long. This well-preserved specimen had reached about a fifth of his (or her?—can’t be sure!) expected adult growth within, paleontologists suspect, the first year of life. Dinosaurs, amphibians, reptiles, and even mammals1 have a seasonal pattern of variation in bone density called lines of arrested growth. Dinosaur Joe’s tibia (aka his shinbone—the bone thought to most accurately represent maturation in dinosaurs) had no such lines, suggesting he was under a year old.

“Our baby Parasaurolophus is barely one-quarter of adult size, but it had already started growing its crest,” said Dr. Andrew Farke, lead author of the report published in PeerJ. “This is surprising, because related dinosaurs didn’t sprout their ornamentation until they were at least half-grown. Parasaurolophus had to get an early start in order to form its unique headgear,” he added. “Dinosaurs have yearly growth rings in their bone tissue, like trees. But we didn’t see even one ring,” explained co-author Dr. Sarah Werning. “That means it grew to a quarter of adult size in less than a year.”2 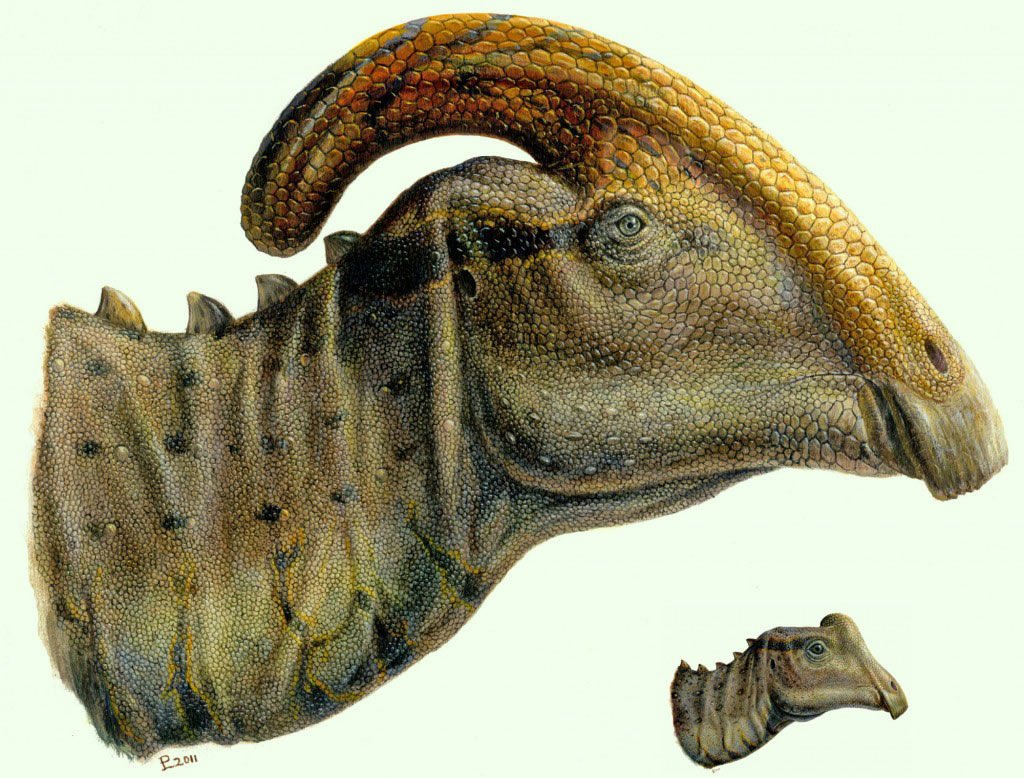 These are scale drawings comparing the size and shape of the crest on the adult and juvenile Parasaurolophus. Inside, the baby’s crest is completely filled with tubular passages connected to its airways. Image by Lukas Panzarin, via Sci-News.com.3

The familiar long tubular crest atop the head of adult Parasaurolophus specimens has long been familiar to paleontologists and dinosaur-loving children, but its purpose has been a matter of speculation. From an evolutionary point of view, there is also the question of what survival advantage would have accrued from possessing this elaborate head décor. Other crested dinosaurs for which juvenile specimens are known seem to have begun growing crests when they were about half their adult size. Joe, at a much smaller fraction of his adult size, already had a bump containing extensive air passages on his head.

Joe’s juvenile crest differs not only from the crest anatomy of adults but also from crested juveniles of other types of dinosaurs. Adult crests do have a connection to the nasal passages, but the connection is much wider in Joe. The bones in the region appeared incompletely ossified, an additional factor attesting to Joe’s youth. In fact, unlike even the juveniles of other crested varieties of lambeosaurins, Joe’s nasal passages occupy almost the entire crest.

In pondering the evolutionary survival advantage of this crest to young Joe and its implications for all his hadrosaurid relatives, Farke and colleagues write, “The crests of hadrosaurids are intimately integrated with the respiratory system, by virtue of the airway passing through the crest. Thus, the crest had to form early in development, simply so that the animals could continue to breathe.”4 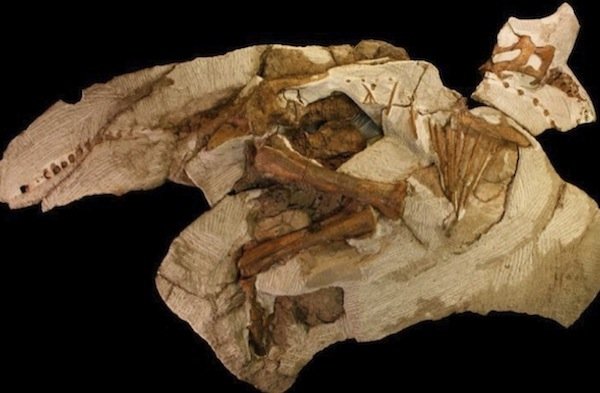 This fossil of a baby Parasarolophus is remarkably complete, missing only the forelimbs, the end of the tail, and assorted small bones and parts of some bones. Image by Raymond M. Alf Museum of Paleontology, via International Business Times.5

When William Parks named the Parasaurolophus genus in 1922, he thought that the crest might have been tethered to the spine to support the head. Others have suggested the crests served an ornamental purpose related to displays of dominance, aggression, or mating rituals. Some illustrations therefore depict these animals sparring with their crests. Inside the long crest tubes lead in and out of the nasal airways. Therefore the possibility that air moving through the crest helped with thermoregulation, air storage for underwater feeding, or provided a place for a salt gland have been suggested. The crests do not have any apparent openings to the outside, so they were not some sort of auxiliary nostril.

The most obvious use of these supra-nasal pipes, when we think about modern animals, would be to produce or amplify a sound. A sound produced in the throat would likely have resonated through the tubular passages. This is reminiscent of the way even our own singing voices resonate through our far less extensive sinuses to give—at least from some people—a rich full sound. Of course the purpose of such a resonant sound becomes the subject of speculation but again can be considered in light of modern animals and the many reasons they use various calls. Could it be some form of communication, a method of species recognition, or a display to declare dominance? Maybe. Did Joe use his developing trumpet to call to his mother? We cannot know, of course, but he probably could have.

Farke thinks the deeper “voice” produced by the adult resonating through its more extensive pipes might be a way of getting the dominant message across to fellow dinosaurs. He says, “If adult Parasaurolophus had ‘woofers,’ the babies had ‘tweeters.’ The short and small crest of baby Joe shows that it may have had a much higher pitch to its call than did adults. Along with the visual differences, this might have helped animals living in the same area to figure out who was the big boss.”6

Though fossils can’t call to one another any more than they can joust, acoustics experts have speculated, on the basis of the tube anatomy in a fossilized Parasaurolophus crest, what an adult would probably sound like. Check it out at “The sound of Parasaurolophus.” One listener captured the sound in simile, commenting the adult Parasaurolophus sounded like a chair “scootching across the floor.” Perhaps soon someone analyzing Joe’s anatomy—which is freely available online—will come up with a simulation of his higher pitched call and produce an animated Parasaurolophus family harmonizing in two parts.

What Can These Bones Tell Us?

We see God’s hand as the common Designer orchestrating the formation of common designs in different ways.

Evolutionary paleontologists are excited about Joe, not only for the insight gained into the structure and function of the crest, but also for the opportunity he provides to study how evolution presumably relied on a change in the timing of embryologic and adult development. This is called heterochrony. Biologists in the field of comparative anatomy compare the way embryos, maturing juveniles, and adults of various species grow and develop. Variation of the timing and rate at which intricate anatomical structures form produces remarkable biodiversity. Evolutionists often use embryonic development and juvenile maturation to try to figure out how evolution happened. They need to explain how and why this intricate orchestration for an ancestral animal changed to evolve different kinds of animals—such as dinosaurs with head gear varying from tubular crests to spikes, knobs, frills, large domes, and a variety of modified horns.

We instead see God’s hand as the common Designer orchestrating the formation of common designs in different ways. God created all kinds of animals, including all the original kinds of dinosaurs about 6,000 years ago and designed them to reproduce and vary within their created kinds. While we don’t know what those original kinds looks like, we can see from the fossil record even of Parasaurolophus that different species varied somewhat in the internal anatomy of their crests, exactly as we would suspect from the process of speciation. Thus it comes as no shock from a biblical perspective that the young of some species likely began forming their head crests on a different timetable than others.

What killed Joe the baby Parasaurolophus? It wasn’t likely a predator. “There’s no evidence of disease on the bones, and no obvious evidence of a predator attack,” Farke says. “The bones are well put-together. They’ll really get torn apart if some predator attacked them.” Joe’s entombed posture is pretty typical among fossils: his neck is arched, his limbs curled, and his tail straight. His exquisitely preserved anatomy is most consistent with a rapid catastrophic burial. When the global Flood struck the earth a little less that 4,500 years ago, billions of animals were catastrophically buried by violent surges of rising water and sediment that overcame their environments, producing many of the layers we see in the fossil record.

Thus we see that “Joe,” like billions of other animals, met his sudden end as a result of God’s judgment on man’s wickedness (Genesis 6:5), as described in Genesis chapter 6 through 9. We know from the Bible that the animals (Genesis 6:17–7:5) on Noah’s Ark would have included two dinosaurs of the same kind as Joe to repopulate after the Flood, though extinction eventually overcame them and many other animals. Learning more about these amazing animals that God designed gives us a glimpse of our Creator’s creativity as manifested in the variation available in the genetic information He created 6,000 years ago. The exquisite preservation calls to mind not only the Flood of judgment on man’s sin but also Noah’s Ark as a reminder of the safety and salvation available in Christ. And not without curiosity about the world that then was, we can now—thanks to this new knowledge of Joe’s juvenile Parasaurolophus anatomy—mentally visit the pre-Flood world and even imagine the sounds a visitor might have heard in the habitats where dinosaurs roamed.