Evolutionary researchers claim to have pinpointed the origin of intelligence.

“One of the greatest scientific problems is to explain how intelligence and complex behaviours arose during evolution,” says University of Edinburgh neuroscientist Seth Grant, whose research group claims to have zoomed in on the ancestral source.1

Their papers, published in Nature Neuroscience, assert that accidental duplication of two genes in a “550 million-year-old” marine worm provided the raw material for the subsequent evolution of vertebrate brainpower. Mutations within the modern versions of those genes in mice and humans are associated with poor intellectual performance or mental illness such as schizophrenia. Therefore, Grant says, “Our work shows that the price of higher intelligence and more complex behaviours is more mental illness.”2

He believes the results show conclusively that vertebrate intellect evolved from primordial gene duplication and subsequent mutations in the duplicate copies.

“Our evidence shows unambiguously that these genome duplications and expansions in the gene family have produced greater complexity to the behavioral repertoire of the vertebrate,” Grant asserts. He believes the results show conclusively that vertebrate intellect evolved from primordial gene duplication and subsequent mutations in the duplicate copies. “This genome event produced a kind of cognitive big bang; it produced a large set of interesting behavior,” said Grant. “It produced a molecular toolbox, which in the case of the brain, produced many, many more proteins that you find in the synapses, the junctions between nerve cells. . . . It would be like a stereo or a machine with many more switches in it; it can do more sophisticated types of things.” 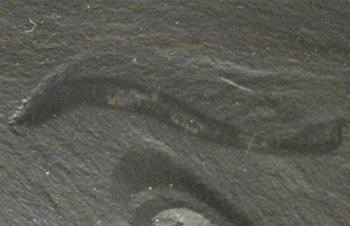 Many evolutionists consider Pikaia gracilens to be the ancestor of all vertebrates because it had a cartilaginous notochord (instead of a vertebral column) and myomeres (bands of muscle). Evolutionists maintain that vertebrates evolved from “simpler” forms. Some rare creatures have a notochord but no actual vertebrae. Therefore, evolutionists believe the presence of a notochord and other structures resembling vertebrate embryonic anatomy is evidence that vertebrates evolved from a common ancestor possessing a notochord. See “Common Ancestor Hidden in Burgess Shale” for more information about this extinct invertebrate as well as the false assertions of embryonic recapitulation used to support its status as an evolutionary ancestor. Image credit: Photo is public domain on www.livescience.com. This fossil is in the Smithsonian.

The eel-like marine worm Pikaia gracilens is the hypothetical source of these ancestral genes. Pikaia’s genome cannot be sequenced because it is extinct, but a similar invertebrate lives today. Based on that invertebrate’s genome, researchers believe Pikaia had single copies of some genes similar to those found in vertebrates. Two such genes involved in the transport of glutamate in brain cells seem important for development of memory and learning. Vertebrates have multiple copies of these genes.

To test their notion that duplicated genes evolved to produce vertebrate brains, the researchers tested the intellectual capacity of mice possessing mutated, defective versions of these genes. Visual recognition of images on a touchpad tested the mouse-ability to learn. The mutant mice performed poorly. Humans took the same sorts of tests, and people with mutations in those genes likewise performed poorly. In humans, similar mutations are also associated with schizophrenia.

“Using the latest molecular and behavioural techniques, this research makes a significant step forward in our understanding of how sophisticated behaviours emerged in humans and other animals,” said John Williams of the Wellcome Trust, which funded the work. “This ground-breaking work has implications for how we understand the emergence of psychiatric disorders and will offer new avenues for the development of new treatments.”3 And coauthor Tim Bussey adds, “We can now apply genetics and behavioural testing to help patients with these diseases.”4

As we evaluate Grant’s claims, we note there are two different types of mutations in view. While the second (discussed below) is the sort actually seen today in mice and humans, the first is hypothetical—the supposed duplication 550 million years ago that produced genetic raw material for evolution. While duplications do occur, the existence of multiple copies (or near-copies) of a gene does not prove it evolved by duplication. The proper function of some genes depends on multiple copies or near-copies, and there is no reason not to believe that some genetic information was simply designed that way. (See “New Function through Gene Duplication” for more information.)

Evolutionists theorize that duplication mutations in simple primordial organisms allowed evolutionary experimentation in the extra gene copies until useful new genetic functions could emerge. However, duplicate copies of a gene would not contain new information, just spare copies of old information. Mutations do not produce new information such as the information required to transform one kind of creature into a new and more complex kind of organism. Recent studies claiming proof that gene duplications evolved novel functions actually only showed that gene duplicates still had their original functions. (See “De-Regulation of an Existing Trait” and “New Function through Gene Duplication.”)

The genome of Pikaia is not even known, but more importantly there is no evidence that duplication and subsequent evolution of spare copies can acquire new and more complex functions. Nor is there evidence supporting the notion that simple organisms like Pikaia acquired new information and transformed into increasingly complex creatures.

Unlike hypothetical ancient Pikaian mutations, the mutations in the mice and humans in the study are genuine, observable genetic defects. It is no surprise that those mutations have consequences. That similar mutations produce similar problems in mice and humans is also not surprising because both are biologically mammalian. Having been created by a common Designer to live in the same world, they naturally have many similar designs, anatomically and genetically. Similar biomolecules and the genes that guide their formation are present in many organisms because they need to perform similar functions. They are exactly the sort of similar designs we would expect from a common Designer, our Creator.

While understanding a possible genetic basis for any disease, including mental problems, is an important part of developing treatment strategies, evolutionary dogma makes no contribution to this area of medicine

While understanding a possible genetic basis for any disease, including mental problems, is an important part of developing treatment strategies, evolutionary dogma makes no contribution to this area of medicine—with the possible exception of spurring the funding of projects intended to uncover the evolutionary basis for intelligence. The fact that mental disease and intellectual deficits in mice and humans are associated with certain genetic mutations does not prove their ancestral relationship to each other or to a primordial worm.

We live in a world cursed by sin. Disease and death are part of that cursed world. Mental illness and other diseases are not the price we paid in order to evolve big brains. They are instead a part of the suffering that began in this world after man first sinned against the good, loving, and holy Creator 6,000 years ago. (See “Why Does God’s Creation Include Death and Suffering?” to learn more.)

Discovering that the same genes are important to the function of mammalian brains does not demonstrate their evolutionary ancestral relationships to each other or to the most “primitive” creature believed to possess a version of the gene in question.

It is marvelous to discover some of the biological underpinnings that enable our brains to function the way they do. But those biological mechanisms are not evidence that our intellectual ability had to evolve from simple organisms. If we want to know how humans acquired their intellectual capacity, we need look no further than the book of Genesis. “So God created man in His own image; in the image of God He created him; male and female He created them” (Genesis 1:27). It is a grievous misuse of our God-given brains to think that our brains evolved from a worm: another example of sinners “suppressing the truth in unrighteousness” (Romans 1:18–20).