Give Today
News to Know

Pat Robertson Sticks to Revealed Science Over the Word of God

Pat Robertson’s word on the age of the earth adheres to “revealed science” over the revealed Word of God.

Bill Nye isn’t the only TV personality to get some extra airtime discussing the age of the earth lately. Televangelist Pat Robertson of the CBN–TV network’s program 700 Club joined in with a video answer that has since grabbed media and blogger attention. You can watch it at YouTube and read a complete transcript of it along with Dr. Tommy Mitchell’s insightful rebuttal at “Pat Robertson’s Word or God’s Word: Which Will You Believe?.” 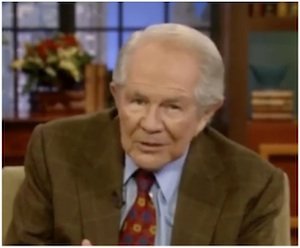 Pat Robertson’s scientifically confused and biblically inconsistent video answering a mother’s concerns about her family’s distrust of the Bible’s answers about dinosaurs fuels the ongoing furor about the age of the earth that erupted in the wake of Senator Rubio’s recent remarks about the economy and the age of the earth. Image credit: YouTube.

As evident from Robertson’s remarks, he is confused about the reason young-earth creationists believe the earth is only about 6,000 years old. He incorrectly comments on the scientific information relevant to this issue. And he is inconsistent in his interpretation of God’s Word. In a misguided effort to hang onto kids for God, Robertson clings to something he calls “revealed science”—evidently a hybrid blending of humanistic philosophy about historical science with a holy label—without realizing that such a compromised position is a documented cause that so many youth are leaving the Christian church today.

Robertson’s video, posted on November 27, presents his answer to a concerned mother fearing her family was walking away from God because they didn’t believe the Bible could explain dinosaurs.1 Robertson buys into the secular dogma about the age of the earth that relies on unverifiable untestable assumptions and ignores the historical record provided by God in the Bible. He uses his faulty understanding of humanistic assertions about historical (origins) science to re-interpret God’s Word.2 And how does he explain dinosaurs? Robertson invents a time “before the time of the Bible” in which dinosaurs could roam the globe before being entombed in the fossil record.

Robertson mistakenly attributes the foundation for the young-earth view to 17th century Archbishop Ussher’s The Annals of the World. He says, “That’s not the Bible. That’s Bishop Ussher.” Of course, no young-earth creationist thinks Ussher’s writings are equivalent or superior to Scripture. Still, he was a brilliant and careful Bible-believing scholar and worthy of serious consideration in his handling of the biblical text. And just as Ussher—relying on the internal evidence of Scripture—calculated a creation date of 4004 BC, modern biblical young-earth creationists rely on the same source: the Bible. In that book God revealed the true history of mankind, of the world, and of His work to redeem fallen man to Himself through Jesus Christ. As Christians, we understand the Bible is the inspired Word of God—God’s revelation to man. Since we understand the Bible is therefore the revealed Word of God, Robertson’s declaration, “And so if you fight revealed science you’re going to lose your children,” was a particularly ear-catching pun embodying Robertson’s own compromised position.

Besides misrepresenting the fact that biblical young-earth creationists rely on biblical authority—not Ussher’s—Robertson is confused about the secular basis for believing in a 4.54 billion year old earth.

Besides misrepresenting the fact that biblical young-earth creationists rely on biblical authority—not Ussher’s—Robertson is confused about the secular basis for believing in a 4.54 billion year old earth. He claims carbon dating and the “carcasses of dinosaurs” make the case. Carbon dating, however, is not used by secular scientists to date anything to millions or billions of years: the half-life of carbon-14 is too short for that. Instead, secular interpretations of other radiometric dating methods are used. However, those interpretations are based on assumptions about the remote unobservable past, which by its very nature cannot be subjected to objective scientific testing.3 Billion-year conclusions about the past rely on worldview-based assumptions, and that worldview is a naturalistic (i.e., atheistic) worldview that attempts to explain the past and the origin of the world without God.

Robertson is blending a secular, humanistic, God-denying worldview with his inaccurate understanding of the biblical worldview to hatch a position that fits neither. Discerning youth and adults seeing through the illogical fallacies of such a position often walk away, mistakenly believing the Bible is neither true nor relevant. Yet the observable facts of science do not dispute the history revealed in the Word of God, as thousands of articles on this website demonstrate.

We are as concerned as “Michelle,” the mother who wrote the concerned letter read by Robertson’s co-host. Yet our response is to give biblical answers, to show that the Bible is not in dispute with actual scientific observations and really does explain dinosaurs.

Robertson asserts that the existence of dinosaurs in the Dakota’s irrefutably shows the earth is older than the Bible’s history covers. Yet the Bible does explain the existence of these interesting creatures. Dinosaurs were land animals created at the same time as other land animals on Day 6 with Adam and Eve. Some of each kind of dinosaurs were preserved on the Ark during the global Flood. Those “carcasses” Robertson thinks died “before the time of the Bible” were for the most part buried catastrophically during the global Flood described in Genesis. Those that survived on the Ark reproduced for a time and, it appears at this point, subsequently became extinct.4

The media and bloggers have been having a field day with Robertson’s inconsistencies and with what they see as the fundamentalists fighting among themselves. Robertson is not alone in adopting this compromised, inconsistent position. Many Christian leaders have done the same. As Ken Ham points out in today’s blog, one “reason that many atheists so love what Pat Robertson said is because they know when someone associated with the church compromises on Genesis, they recognize that this compromise helps lead people to reject the Bible as a whole.”

Dr. Tommy Mitchell points out in his detailed analysis of Robertson’s remarks, “The millions-of-years view, by demanding death before sin,5 challenges the gospel message itself.” While belief in a young earth is certainly not a prerequisite to salvation, a consistent biblical understanding of the reason we need the salvation provided in Christ does require it. We must therefore stand firm on the Bible from the very first verse, even when a prominent brother in the Lord and well-known humanitarian is involved. If we cannot show people that God gave us the truth about the perfect world He originally created and the corruption of that world through man’s sin, then how can we expect them to trust the truth God gave us about Jesus Christ and the salvation he graciously offers them through Christ?