What is man? A series of lucky evolutionary accidents—a mutant masterpiece!

The 9 June 2012 issue of New Scientist has dice on the cover to remind readers, “Evolution is a game of chance.” The issue contains a series of articles highlighting the “wealth of information” available from comparing the human and ape genomes.1 “It gives us a perspective on what it takes to become human,” says paleoanthropologist John Hawks. But more than genetic explanations for some of our special characteristics is in view here. The magazine’s focus is on how humans evolved from ape-like ancestors. As the lead article says, the journalist “uncovers six of the winning mutations that helped humans hit the jackpot.”

What fossils cannot provide—presumably because insufficient transitional forms were preserved by haphazard fossilization—secrets preserved in genetic codes can reveal, or so the story goes. And while “we are a million miles from a complete list” of the advantageous mutations that presumably transformed ape-like ancestors into the “lucky you” in the mirror, “even the first few to emerge as likely candidates are shedding light on the ascent of man.” We can see only the results of millions of years of evolution and selectionand not “the harmful mutations that were weeded out,” Hawks points out. 2 Therefore, “When we look back at the whole process, it looks like a stunning series of accidents.”3 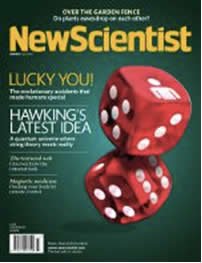 As the cover of the 9 June 2012 issue of New Scientist illustrates, “Evolution is a game of chance.” This issue “uncovers six of the winning mutations that helped humans hit the jackpot.” Image from http://www.newscientist.com/issue/2868

The genomic recipe for “proving” human evolution follows a predictable pattern. First, identify a gene associated with distinctively human traits. Then, by comparing the human version of the gene to corresponding ape genes, define any differences as mutations and voilà, another of the countless lucky accidents that made us human becomes headline news!

Manual dexterity places the human ability to use tools light years ahead of otters that beat shellfish open with rocks. Tools are great, so Arthur C. Clarke’s portrayal of “the day an ape-man started clubbing things with an animal bone as a pivotal moment in our evolution” in the classic science fiction movie 2001: A Space Odyssey is spot on from the evolutionary point of view, but “our progress has been dependent on our dexterity.”4 Noting even a chimp’s opposable thumb is less specialized for dexterity than a human’s, the “Helping Hand” article discusses a gene called HACNS1.5 Its insertion into genetically engineered mouse embryos seems to alter forelimb development. Operational (observational) science reveals the human version of this regulatory gene differs in 16 places from the chimp version. 6 But through the magic of imagination, evolutionary scientists confidently declare this gene has “undergone 16 mutations since we split from chimps.”7

The other five articles in the series focus attention on the brain. After all, the human brain’s information storage and retrieval capacity provides the physical platform to support our abstract thought processes, including uniquely human linguistic abilities. Like “Helping Hands,” these articles follow a predictable pattern. The key ingredient to this recipe for “proof” involves re-defining significant chimp-human DNA differences as “mutations.” Inherent in this definition is the presupposition that humans evolved from ape-like ancestors, and, by then interpreting differences as mutations, the presupposition appears proven.

Noting that human brains are “three times the size of those of our nearest relative, the chimpanzee,” 8 “Brain Gain” explains the increase in size “since the human lineage diverged from chimpanzees some 5–6 million years ago”9 is likely attributable to a gene called ASPM, saying, “We know this gene was undergoing major changes just as our ancestors’ brains were rapidly expanding.” 10 A defect in human ASPM causes microcephaly. And because there are many differences between normal human ASPM and ape ASPM, evolutionary scientists infer that it has evolved rapidly to produce bigger brains.

Of course, being bigger is not enough. The many convoluted folds in the brain provide space for human neurons to make a vast number of interconnections. Because recent research has shown that formation of these interconnections during embryonic development is facilitated by a regulatory gene-duplicate called SRGAP2, the human neurological architecture is “obviously” the evolutionary by-product of random gene-duplicating mutations.

The SRGAP2 gene may indeed be of critical importance in normal human embryonic brain development, but that does not prove it had an evolutionary role in human brain development. As we pointed out in our extensive discussion of the presumed “evolutionary history” of this important gene, “The researchers suggest this and similar ‘human-specific gene duplicates’ helped ape-like ancestors leap to more efficient brain function and scamper up the evolutionary intellectual tree, leaving their cousins in the dust.”11 Furthermore, “Happily for the evolutionary model, the [molecular date for the duplication] just happens to be about time evolutionists believe human ancestors diverged from Australopithecine ancestors.”12

Yet these impressive calculations are built upon circular reasoning, statistical fallacies, and even evolutionary bias built into the technology used to compare genomes.

Yet these impressive calculations are built upon circular reasoning, statistical fallacies, and even evolutionary bias built into the technology used to compare genomes. As molecular geneticist and creationist Dr. Georgia Purdom explains, “People need to understand that many assumptions by the scientists, like human evolution from an ape-like ancestor, have a direct effect on how the scientists compare the genomes. They compare them in a way that will achieve the conclusion they have already determined is true—that humans and apes share common ancestry. It’s truly a case of circular reasoning!”

“Jaw Dropper” tells the tale of the gene MYH16, the blueprint that determines the protein components in jaw muscles.13 The human version differs from the chimp version, providing humans with “wimpy jaw muscles by comparison.”14 Supposing strong jaw muscles would keep the skull too tight for brain growth, muscle researcher Hansel Stedman says, “We are suggesting this mutation is the cause of the decrease in muscle mass and hence the decrease in bone. Only then do you lift the evolutionary constraint that precludes other mutations that allow your brain to continue growing.”15

Of course, bigger better brains require a generous fuel supply, so evolutionists look to comparative genetics to explain the generous supply of glucose-generating amylase enzyme in human saliva, the human brain’s efficient glucose transport systems, and the “replumbing [of] its blood vessels” from the ape-like ancestral model. Humans have anywhere from 6 to 15 copies of the gene to make salivary amylase—which accounts for the human “sweet tooth”—whereas the chimp only has two. 16 And a sort of brain-over-brawn mechanism in the human brain’s blood vessels shunts glucose—the optimal fuel for brain cells—to the brain in preference to muscles, showing that “athleticism has been sacrificed for intelligence.”17 Because the “sweet gene” is present in greater quantities in humans and because the blueprint for the brain’s glucose transport system is contained in a gene that differs from that in apes, these lucky evolutionary improvements are attributed to “mutations” rather than to divine design.

The recent sequencing of the gorilla genome sheds evolutionary light on the brain’s plumbing. A defect in the gene RNF213 causes Moyamoya disease in humans with constriction of the brain’s blood supply. And because normal human RNF213 differs from the gorilla’s version, ”The gene may have played a role in boosting the brain's blood supply during our evolution.”18 Evolutionary geneticist Chris Tyler-Smith, part of the gorilla genome group, explains, “We know that damaging the gene can affect blood flow, so we can speculate that other changes might influence that [brain blood flow] in a beneficial way.” 19 Yet again, present-day genetic defects and inter-species differences are observable, but attributing those differences to divergent evolution and accumulation of mutations is imaginative, unverifiable, and contrary to the biblical eyewitness account. God, our Creator, was the only eyewitness to our origins and has left us His account, testifying to His unique creation of humans in His own image distinct from animals on the Sixth Day of the Creation Week about 6,000 years ago.

Our linguistic capabilities are partly attributable to the “language gene,” FOXP2. This gene is thought to regulate genes related to the embryologic development of the neurological hardware involved in language learning. A British family (“KE”) that suffered extreme language deficits in 16 members was found in 2001 to have a mutation in FOXP2, revealing the gene’s importance. But because each animal possessing FOXP2 has a slightly different version, evolutionists believe a mutation in FOXP2 was the happy accident that gave humans the “gift of the gab.”20 Indeed, there was actually speculation that the KE family had “reverted to a ‘chimp-like’ version of the gene”! 21 The family’s reputed reverse evolution was debunked by documenting they had a “new mutation,” but the very fact that such evolutionary reversion was ever thought of reveals a deeply ingrained evolutionary worldview.

Despite the determination on the part of evolutionists to define interspecies differences as documented mutations from evolutionary ancestors, it is vital that discerning Christians continually note the difference between that which is experimentally observable in the present and that which is imaginatively envisioned in the evolutionary past. God created human beings in His image, with a unique spiritual nature and an eternal destiny. Man acquired a sinful nature by rebelling against his Creator. To envisage human beings as nothing more than evolutionarily advanced animals—mere products of random luck over millions of years—is not an inconsequential choice but a dangerous position making it easy to ignore the need to be reconciled to our God through Jesus Christ.