All visual pigments share molecular similarities. The origin of that similarity has long been a subject of debate. Researchers from the National University of Ireland Maynooth and the University of Bristol report a computer analysis of all possible permutations of pigment similarities in various sorts of animals and humans. They report they have thus “reverse engineered” the pigments to their common ancestral molecule and so traced the evolution of vision. 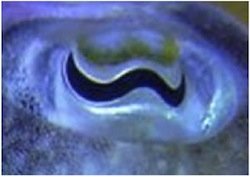 This cuttlefish eye uses visual pigments similar to ours. Researchers believe those pigments came to us from a common ancestor. (Image credit: University of Bristol through www.sciencedaily.com 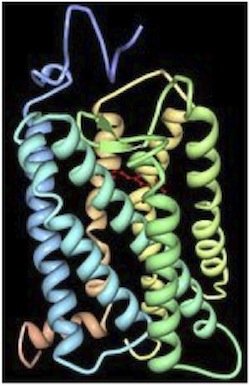 This is a model of a cow’s rhodopsin molecule. The light-sensitive chromophore is depicted in red. The opsin molecule, shown as a series of helices, straddles the cell membrane seven times. Its change in configuration in response to the chromophore’s light absorption triggers a visual message. Image courtesy of en.wikipedia.org/wiki/Opsin

Visual pigments consist of an opsin protein and a light-sensitive chromophore. The opsin straddles a cell’s membrane seven times; the chromophore is locked within the opsin’s three-dimensional structure. When light strikes, the chromophore absorbs a photon and suddenly causes the opsin to change shape. The new shape triggers an electrochemical signal transmitting a visual message to the central nervous system.

Opsins differ in their amino acid sequences. Different opsins in the retinal cones of our eyes respond to differing wavelengths (and therefore colors) of light. Rhodopsin, found in our rods—the retinal structures sensitive to low levels of light—is a molecule consisting of an opsin and a retinene (derived from vitamin A) chromophore. When light strikes rhodopsin, a change in configuration produces a visual signal. Other light-sensitive opsins serve nonvisual functions, such as pupillary constriction and regulation of circadian rhythm.

Opsins differ, but organisms ranging from the simplest marine invertebrates (consisting of only two layers of cells) to humans utilize opsins to detect light. Radially symmetrical jellyfish have a neural net instead of a brain, but they utilize opsins too. Before this study, evolutionists generally believed the vast differences between brainy bilaterians (bilaterally symmetrical living things like mammals, fish, and birds) and brainless jellyfish were so vast that the opsins must have evolved more than once.

Dr. Davide Pisani and colleagues report that opsins only had to evolve once about 700 million years ago. The original, they say, was probably not visually effective. But thanks to 11 million years of duplications of its genetic blueprint, this primordial opsin acquired visual functions. It was passed on to the simplest invertebrates, to jellyfish-like animals, and to the most complex animals and humans, all from a common evolutionary ancestor.

“The great relevance of our study is that we traced the earliest origin of vision and we found that it originated only once in animals, Dr. Pisani explains. “This is an astonishing discovery because it implies that our study uncovered, in consequence, how and when vision evolved in humans.”

Dr. Pisani’s team used a computer analysis to sort through all the possible combinations of phylogenetic relationships and compare them with the similarities and differences in opsins and the genes that guide their production. However, their analysis does not demonstrate that vision evolved. Instead, they assumed that it evolved and statistically determined what molecular predecessor was the most likely ancestral chemical.

While mutations can cause gene duplication, the discovery of apparent gene duplication does not prove an ancestral gene randomly duplicated itself until it acquired novel functions. (See “Gene genesis” New Function through Gene Duplication for more information.) Furthermore, similar biomolecules and the genes that guide their formation are present in many organisms because they need to perform similar functions (like light-detection). They share not a common ancestor but a common Designer, the Creator described in the Bible. God designed all kinds of organisms fully equipped to survive in the world He made.