Yale Professor “The Origin of Species Is Exactly What Darwin Cannot Explain.” 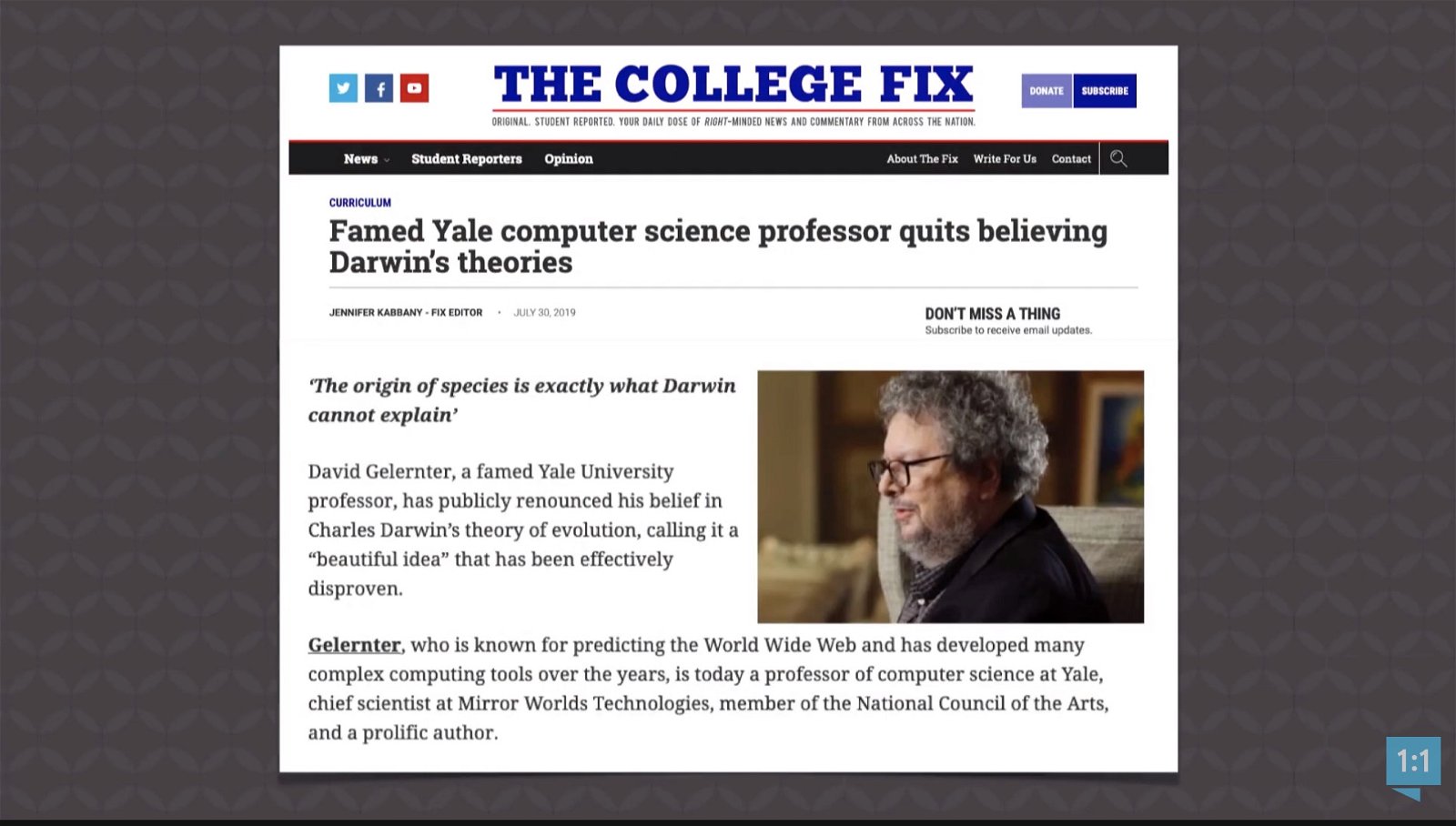 Darwin’s seminal work is often abbreviated as Origin of Species, so you would think his book would explain the origin of the species. But that’s exactly what Darwin can’t explain, according to a column published by highly credentialed Yale professor of computer science David Gelernter. Of course, we already know that Darwin’s ideas of biological evolution don’t explain the origin of species because they contradict God’s Word and don’t explain how the information and code system in DNA could arise, so Gelernter and others could have known that a long time ago, if they would look to God’s Word! But why has Gelernter, who is certainly not a creationist, abandoned his belief in evolution?

Well, according to College Fix, Gelenter claims “his readings and discussions of Darwinian evolution and its competing theories, namely intelligent design, have convinced him Darwin had it wrong.” He calls it a “beautiful idea” that has been disproven by science.

He adds that science has taken an ideological bent and scientists hold onto Darwinian ideas with religious fervor, even when such ideas aren’t supported by observational science. He says,

You take your life in your hands to challenge [evolution] intellectually. They will destroy you if you challenge it. . . What I have seen in their behavior intellectually and at colleges across the West is nothing approaching free speech on this topic. It’s a bitter, fundamental, angry, outraged rejection [of intelligent design], which comes nowhere near scientific or intellectual discussion. I’ve seen that happen again and again. . . I am attacking their religion and I don’t blame them for being all head up, it is a big issue for them.

Absolutely evolutionary ideas are a religion—the religion of naturalism (atheism). That’s why evolutionists defend their ideas with such fervor and so vehemently attack those (like us here at Answers in Genesis) who dare question or outright reject evolutionary ideas. It’s their religion that allows them to suppress the truth that they know (Romans 1 states it’s evident to all) about God.

Religion is imparted, more than anything else, by the parents to the children. . . And young people are brought up as little Darwinists. Kids I see running around New Haven are all Darwinists. . . The students in my class, they’re all Darwinsts.

Parents bear responsibility before the Lord for how they train their children.

Parents bear responsibility before the Lord for how they train their children. Sadly, many parents—including many Christian parents—don’t teach what God’s Word clearly teaches regarding origins, and then teaching their children how to think critically, and how to evaluate evolutionary arguments. They just affirm what many public-school teachers and textbooks, museums, and the media say—passing along the evolutionary religion to their children without question.

So What’s the Problem?

The popular summary of Gelenter’s arguments gives three areas he sees as major challenges to evolution.

The Bible explains the origin of species—something Darwin failed to do.

The Bible explains the origin of species—something Darwin failed to do. God created all organisms according to their kinds (usually the family level of classification). Genesis 1 repeats the phrase “according to its kind” 10 times. What observational science, particularly genetics, shows us is that there is incredible genetic diversity built into the genome (the DNA) of every kind (family) God created. This allows them to adapt (what Gelenter calls “the fine-tuning of existing species”) to ever-changing environments, but always within a kind (based on the genetic diversity already present), never between kinds. This gives us different species (i.e. lions, tigers, jaguars, house cats) within a kind (i.e. the cat kind, or the family Felidae), but never a different kind!

Learn more in this series of articles by AiG’s Dr. Nathaniel Jeanson: "Can We Find Noah’s Animals. . . in the Modern World?”

The Cambrian Explosion—called this because all the major phyla and body plans suddenly appear in the Cambrian fossil layers without ancestors in the rocks below—is a major challenge for evolutionary ideas. Where did these creatures come from? They seem to appear, fully formed and functioning, out of nowhere.

The Bible explains what we see! There was a global flood that buried billions of organisms in water-borne sediments. The Cambrian explosion represents the initial stages of the flood, as organisms (many of which are now extinct) that were created during the creation week were rapidly buried.

Mutations are Harmful, not Beneficial

This is something we’ve pointed out many times—mutations are usually harmful to an organism, not beneficial. They (combined with natural selection) can’t be the driving force of evolution—they can’t produce the new information needed for a new kind to form.

Learn more in this article by AiG’s Bodie Hodge: “Are Mutations Part of the ‘Engine’ of Evolution?”

Now, this doesn’t mean Gelenter is a creationist—far from it. He doesn’t even believe in intelligent design (which is still a far cry from biblical creation) saying “the world a mess, its suffering far outweighs its goodness.”

We need the history in God’s Word to understand what we see in the world!

That is why intelligent design is not enough! Yes, it’s obvious from what God has made that there is a Creator, therefore everyone is without excuse if they reject him (see Romans 1). But we need the history in God’s Word to understand what we see in the world! And observational science in genetics continues to confirm this over and over again.

Why Is Creation a Mess of Suffering?

Here’s what Gelernter needs to hear in regard to his statement above: God created everything, and his original creation was “very good” (Genesis 1:31). There was no “mess” or “suffering” in God’s original creation. But God commanded Adam not to eat from the tree of the knowledge of good and evil or he would die (Genesis 2:17). Adam and Eve chose rebellion against God. Their choice broke creation (see Genesis 3), bringing death and suffering into creation, and now all of creation groans (Romans 8:22).

The mess and suffering we see in this world doesn’t reflect how God originally created everything! It was originally perfect, it’s only because of our sin that it is messy and filled with suffering. Death and suffering are our fault!

But God has provided the solution to this mess. Jesus, the Godman, stepped into history, living a perfect life, and chose to die on the cross in our place. He took the penalty of death that we deserve because of our sin upon himself. He then rose from the grave, conquering sin and death, and now offers the free gift of eternal life to all who will but their faith and trust in him. We broke creation because of sin but Jesus Christ provided the solution to this problem by offering himself in our place to pay the penalty for our sin so we can have new and eternal life. 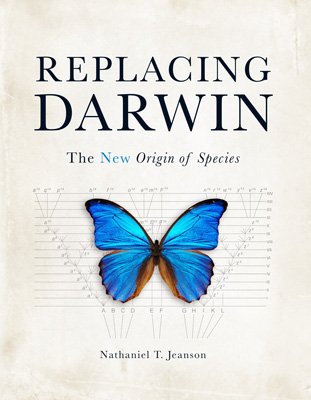 We’re going to send Gelernter a copy of Harvard-trained Dr. Nathaniel Jeanson’s book Replacing Darwin. This book powerfully demonstrates, from a genetic perspective, what Gelernter is saying—Darwin doesn’t explain the origin of species (or the origin of the information and code system in DNA). But Replacing Darwin goes further than that. It lays out a testable prediction, based on a biblical creation model, to explain the origin of the species (descended from the original kinds God created). This book also lays out the message of the gospel—the most important message in the world that Gelernter needs to hear and believe!

You can get your own copy of Replacing Darwin our online store.

This item was discussed Monday on Answers News with cohosts Dr. Georgia Purdom, Avery Foley, and Bryan Osborne. Answers News is our weekly news program filmed live before a studio audience here at the Creation Museum and broadcast on my Facebook page and the Answers in Genesis Facebook page. We also covered the following topics:

Watch the entire episode of Answers News for August 5, 2019.