by Dr. Nathaniel T. Jeanson on May 14, 2016
Featured in The Origin of Species After the Flood
Share:
Email Using:
Gmail Yahoo! Outlook Other

To many people today, Noah’s Ark remains a mystery. Perhaps on some mountain in the Middle East, explorers might still find the remnants of the gigantic barge of Genesis 6–8. But the absence of this vessel, combined with the unfamiliarity that many have with the biblical narrative, leaves many gazing through a dim lens at a dark horizon in the past. 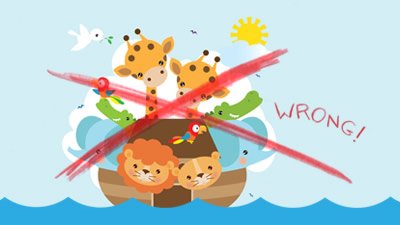 Shrouded in even more mystery are the biological traces left by the animals on Noah’s Ark. A cursory survey of the depictions of Noah’s Ark and the animals it contained are as varied as the moods of a toddler. Some images show a tiny Ark with modern species poking out the sides and roof. Evolutionists depict no boat at all; they think the Ark is an ancient myth with no relevance to the modern world.

For those who are willing to consider the Ark’s existence, a flood of questions immediately enter their minds. What did Noah see? What animals did he bring on board? How many came?

After the Flood, where did the animals go? What happened to the animal passengers? Did they go extinct? Did they change? Are they with us today? Have they left any echo of their existence in our modern world?

In response to the last question, many non-Christians would answer no. Some professing Christians who believe the earth is billions of years old are only slightly less skeptical. Fitting animals on the Ark, growing their population sizes after the Flood, and producing the modern diversity of life are, to them, impossible scientific problems to solve for the literal-Noah, literal-Ark, literal-animals view. Compared to non-Christians, these Christians view the Ark account only slightly less fancifully.

The Scriptures allow us to step back in time and view the Ark from a distance. Genesis 1–11 contains clear, unambiguous descriptions of the historical events surrounding the Flood account. Though these chapters do not contain a list of creatures with which Noah and his family made their year-long voyage, these Scripture passages set a framework in which we can hunt for additional clues.

Modern science is giving us even more windows into this enigma of antiquity. The more we learn about the origin of species, the more hints we gain into Noah’s vistas. The stamp of the Flood reverberates all the way down to the present day—in the form of genetics.

In this series (see outline below), we’ll be following these discoveries to chart a path into the ancient past—a path that leads right back to the animals on Noah’s Ark.