Remember back in 2005 when we first heard that evolutionary paleontologist Dr. Mary Schweitzer had discovered red blood cells and pliable blood vessels inside a T. rex’s leg bone? Bible-believing creationists rightly proclaimed the preservation of dinosaur soft tissue as evidence that dinosaurs were preserved in the fossil record much more recently than evolutionists claimed. Evolutionists were generally skeptical that this material could really be soft tissue belonging to a bona fide dinosaur because they—like creationists—could not believe that soft tissues could survive for millions of years.

Other scientists have now discovered soft tissue within additional upper Cretaceous fossils. Some evolutionists have come to accept the notion that soft tissue, such as collagen in a camel dated at 3.5 million years, could be preserved for at least a few million years. However, many remain skeptical that soft tissue—especially intact protein molecules—could survive in these dinosaur bones dated at 65–80 million years. They tend to attribute components of apparently ancient soft tissue to contamination, if not of the samples, then of the equipment used to analyze the material. University of York’s Matthew Collins, for instance, declared that the T. rex proteins Schweitzer sequenced were too complete to be ancient, saying, “Old proteins get damaged and destroyed, and there is no evidence of any damage in those peptides—they looked fresh and that would be surprising given their age.”1 Meanwhile Schweitzer and colleagues have continued their work verifying that soft tissue samples really belonged to the dinosaurs in which they were found, identifying more protein components,2 and even discovering one mechanism by which blood cells and vessels might be preserved.

Like the later Apollo moon missions, dinosaur soft tissue discoveries may have become a bit ho-hum for the general public, which would doubtless prefer a DNA-based technological leap into a Jurassic Park or a Jurassic World. That’s unlikely, as DNA is even more difficult to sequence than protein and more fragile.3 However, Schweitzer’s colleagues have applied the latest technological advances to not only confirm that they’ve really found preserved blood vessels in a dinosaur bone but also to learn more about actual proteins comprising the ancient blood vessel’s walls. And though the resurrection of ancient animals is quite out of reach except in the movies, they believe they can use this information to reconstruct the history of evolutionary relationships between different kinds of animals. 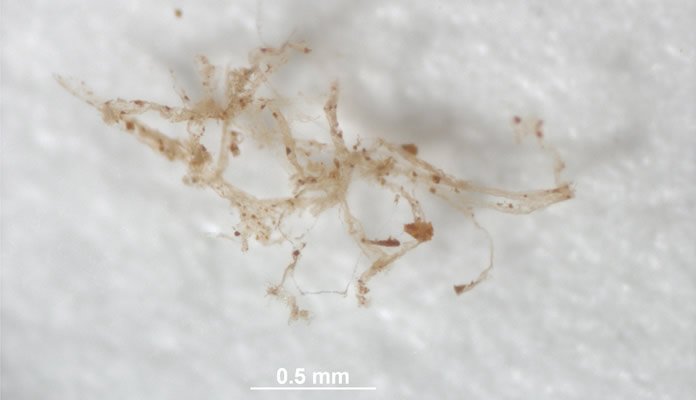 These are blood vessels from the demineralized bone of a dinosaur. Image from a North Carolina State University press release.

Molecular paleontologist Tim Cleland and colleagues in Dr. Schweitzer’s laboratory report in the Journal of Proteome Research that they isolated blood vessels from a Brachylophosaurus leg bone. No one has ever done this before. Then they sequenced and identified several proteins comprising the vessels’ smooth muscular walls.4 This included myosin, which is a major component of vascular walls today. They went to great pains to ensure that the proteins really belonged to the dinosaur and were not contaminants from modern animals, microbes, or fungi. For instance, to isolate and study the dinosaur’s blood vessels, they used laboratory equipment that had never been exposed to tissue from modern animals. This should put to rest accusations that their previously reported ancient protein sequences were too perfect, too modern, and too unaffected by the degradation of time and therefore were obviously contaminants from the modern world.

“This study is the first direct analysis of blood vessels from an extinct organism, and provides us with an opportunity to understand what kinds of proteins and tissues can persist and how they change during fossilization,”5 Cleland explains. The authors have produced clear observational evidence that soft tissue from dinosaurs has been preserved to the present day and even identified some specific proteins in it—the same proteins that today are still found in living organisms.

Blood on the Tracks of Time?

But the authors believe they can do more than learn about the molecular makeup of ancient animals, how fragile biomolecules might be preserved in the first place and degraded by time, and as Schweitzer points out, give us “the possibility of looking at how these animals adapted to their environment while they were alive.”6 Believing that the sequence of proteins in ancient and living organisms will provide the footprints by which evolutionary relationships can be traced and time-stamped, Cleland says this work will enable scientists “to focus on the vascular proteins that may hold more evolutionary information.” He says, “This will provide new avenues for pursuing questions regarding the evolutionary relationships of extinct organisms, and will identify significant protein modifications and when they might have arisen in these lineages.”7

The idea—from the evolutionary point of view—is that if the molecular makeup of biomolecules is closely matched in different kinds of animals, then they are likely cousins, sharing a common ancestor. Of course this ignores the fact that biochemical similarities are just the result of the common use of a good design by a shared Creator. Furthermore, evolutionists assume that, over time, after different kinds of animals diverge from a common ancestor, differences between similar biomolecules accumulate. Therefore they believe they can use the degree of similarity and the types of differences to determine how long ago those animals diverged. Again, this notion is the result of unverifiable evolutionary assumptions, even though observational science has never shown how one kind of animal can actually evolve into a new, different kind of animal.

Rather than leaping to evolutionary assumptions, we should rather point out that the protein molecules the researchers are finding match modern ones because they are the same protein molecules designed by God in the beginning and are used in many many kinds of living things. Furthermore, though some in the evolutionary community remain skeptical that proteins in soft tissue could survive for many millions of years, they don’t see that they derive those “millions of years” from an unverifiable worldview-based interpretation of evidence regarding the age of the Earth. Once contamination is ruled out, either these biomolecules last that long, or it hasn’t been that long. The last option is inconceivable for many!

We on the other hand view unobservable history through the lens of the Word of God—the same God who has always existed. As our Creator, He is the only reliable eyewitness of our entire past. We know from His Word that the Earth is only about 6,000 years old, not millions. And we also know—as described in God’s Word and affirmed by the fossil record—that a global Flood once engulfed the Earth, suddenly and catastrophically burying billions of organisms, many of which were preserved in the fossil record for us to see today. Such sudden burial makes the preservation of soft tissue in ancient organisms much more plausible and explainable. So instead of straining at the proverbial gnat of soft tissue preservation while swallowing the camel8 of millions of years, perhaps evolutionary scientists would find the preservation of ancient soft tissue easier to swallow if they tried washing it down with history provided in the Word of God.