Seventy Percent of Human Genes Traced Back to Acorn Worm?

Evolutionary scientists claim they have traced the origin of the human throat—and 70% of our genes—back to gill slits and DNA in the lowly acorn worm, “our closest wormy cousin.” Should we swallow it?

In an effort to discover the characteristics we humans supposedly inherited from organisms found in the Cambrian explosion, scientists have sequenced the genome of the acorn worm. “It's an ugly beast,” says UC Berkeley professor John Gerhart, leader of the project. Coauthor Daniel Rokhsar boldly claims, “Acorn worms are marine invertebrates that, despite their decidedly nonvertebrate form are nevertheless among our closest invertebrate relatives.”1

“Acorn worms look very different from chordates, which makes it especially surprising that they and chordates, like humans, are so similar on the genomic, developmental and cell biological levels,” Gerhart adds.2 Chordates include humans and other vertebrates as well as a few invertebrates, but not acorn worms. Chordates, if only as an embryo, have a bundle of nerves like a spinal cord supported by a cartilaginous notochord, a body that extends past the anal opening, and a series of openings in the side of the throat (pharyngeal slits). Reflecting the evolutionary presumptions that guide his interpretation of genetic comparisons, Gerhart says, “I'm interested in the origins of chordates, which, of course, came from non-chordates, and hemichordates like the acorn worm are the closest we have to this lineage. So it’s important to compare the development and genomes of our group, the chordates, with the hemichordates if you want to know what characteristics the common ancestor really had.”3

Evolutionists think acorn worms, which have not changed significantly since their preservation in the Cambrian fossil record,4 are a living representation of the evolutionary link between vertebrates and invertebrates. All vertebrates and some invertebrates—like acorn worms—are deuterostomes, a word meaning “the mouth is second.” The mouth in deuterostome embryos develops “second”—after the opening for the other end of the digestive tract.5 This “deuterostome” pattern of embryonic development is found not only in acorn worms but also in starfish, sea urchins, fish, and all other vertebrates, including humans. Evolutionary scientists believe that this embryologic pattern is the evolutionary footprint of our shared history with these animals through a common deuterostome ancestor that presumably lived 570 million years ago.6 This genetic study, in the opinion of the authors, confirms evolutionary relationships between these very different kinds of animals, as well as humans.

Of course, the scientists could not actually sequence DNA from a common ancestor of acorn worms and vertebrates—that ancestor being purely hypothetical, existing only in their worldview-based imaginations. Instead, Gerhart, Rokshar, Simarkov, and colleagues sequenced the genomes of two of the 90 or so living species of acorn worms. Oleg Simakov, coauthor of the study in Nature, says, “Our analysis of the acorn worm genomes provides a glimpse into our Cambrian ancestors’ complexity and supplies support for the ancient link between the pharyngeal development and the filter feeding lifestyle that ultimately contributed to our evolution.”7

The authors of the study report that 8,716 genes have similar counterparts (homologues) present in enough diverse deuterostomes to “imply their presence in the deuterostome ancestor.”8 In addition to the discovery that vertebrates and invertebrates like acorn worms share many protein-coding DNA sequences, the authors found that some sections of DNA thought to regulate genetic expression appear in all the different types of deuterostomes they sampled.9 The order in which many genes are arranged is also similar, suggesting that if certain groups of genes work together in one kind of animal they often work together in many different kinds of animals.

The scientists found more genetic similarities between invertebrates than between acorn worms and vertebrates. Yet depending on how the genes are tallied,10 as much as 70% of the human genome’s approximately 20,000 genes (DNA sequences that code for proteins) have counterparts in the acorn worm and hence—by evolutionary reckoning—with the last common ancestor shared with our so-called “closest wormy cousin.”11

Of course, we expect to find many common genes in different kinds of animals.

Of course, we expect to find many common genes in different kinds of animals. They live in the same world in bodies utilizing the same basic biochemistry and sharing many of the same basic needs. And like genes, many different kinds of organisms need the same or similar regulatory elements in their genomes. This does not demonstrate common evolutionary ancestry, just a common Designer—the Creator God.

Furthermore, we are accustomed to hearing that we share about 98% of our genome with chimpanzees—supposedly our closest primate cousin. Such oft-quoted numbers are, as Frost Smith explains in “A Fresh Look at Human-Chimp DNA Similarity,” deceptively impressive. And as Dr. Nathaniel Jeanson points out in “Differences Between Chimp and Human DNA Recalculated,” evolutionists conveniently overlook the hundreds of millions of genetic differences that evolution can never bridge. 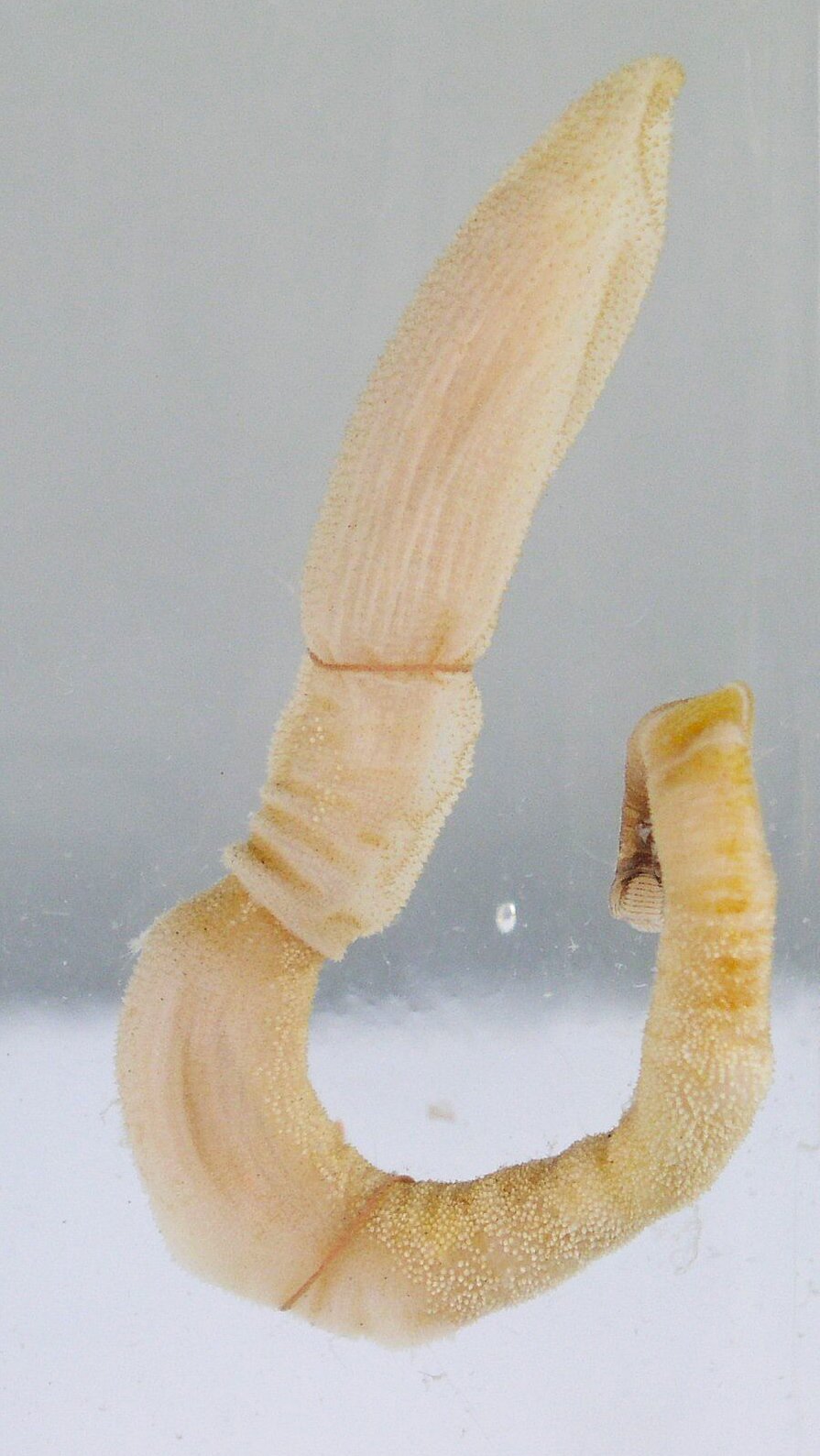 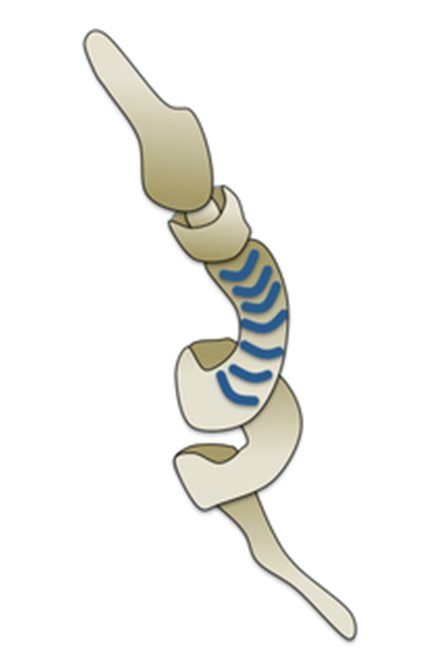 This is an acorn worm. It has many gill slits—shown in blue in the diagram—allowing water to pass through its mouth and out of its body through gill pores. From this water an acorn worm not only obtains oxygen—as fish do—but also nutritious organic debris. The gill slits filter this food from the water. Photograph by user Necrophorus, via Wikimedia Commons. Diagram by user Zebra.element, via Wikipedia.

Acorn worms range in size from 3 ½ inches to over 8 feet, and though most species live in shallow brackish water, some live at the bottom of the sea. The acorn worm pokes its acorn-shaped proboscis around in sand or mud, stirring up debris. It directs the debris-laden water into its mouth using cilia and collects not only oxygen but also bacteria, algae, and other nutritious edible organics by filtering it through its pharyngeal slits, or gill slits. An acorn worm can have hundreds of gill slits, equipping it for a very efficient form of filter feeding.

“What’s so great about having gill slits is the large volumes of water you can put through the animal to collect food; they allow high-throughput filtering and feeding, whereas other animals take one gulp, deal with the food in that one gulp, expel the water out the mouth and take another gulp,” Rokhsar explains.12 But the significance of gill slits in this invertebrate goes far beyond these observable advantages to the acorn worm and to an evolutionarily minded scientist speaks volumes about the unobservable past history of many other kinds of animals, and even humans.

Evolutionists believe that gill slits evolved in animals like acorn worms to make filter feeding efficient and then later evolved into oxygen-capturing gills and even later into various parts of our throats that have no direct oxygen-gathering roles at all. As Rokhsar says, “The presence of these slits in acorn worms and vertebrates tells us that our last common ancestor also had them, and was likely a filter feeder like acorn worms today. The pharyngeal area of these worms and of all deuterostomes is their most significant shared innovation.”13

Neither humans nor other mammals have gills at any point in their development.

Neither humans nor other mammals have gills at any point in their development. Human embryos have several swellings along the neck, little mounds of cells that differentiate into parts of the jaw, face, ear, middle ear bones, thyroid and parathyroid glands, and voice box. Based on superficial appearance and evolutionary thinking, these folds and swellings were once called gill slits, gill pouches, gill arches, or branchial arches. Many embryology textbooks have abandoned this deceptive terminology in favor of pharyngeal arches—meaning “arches in the region of the throat.” But the authors believe genetic similarities confirm a gill slit origin for them. That’s why Rokhsar refers to the acorn worm’s gill slits as our “most significant shared innovation.”

Genes for Such a Worm as I

The authors found that a cluster of six genes expressed during formation of the embryonic acorn worm’s gill slits corresponds to a cluster of six genes expressed in a similar anatomical region in many other kinds of deuterostome embryos, including humans. This cluster of genes consists of coding for four transcription factors—proteins that control the rate at which various genes are transcribed (from DNA into RNA)—as well as two common regulatory genes. Though this group of genes is not found in all the deuterostomes they tested, it was only found in deuterostomes, and they “conclude that the deuterostome ancestor possessed such a cluster.”14 They write, “We propose that the clustering of the four ordered transcription factors, and their bystander genes, on the deuterostome stem served a regulatory role in the evolution of the pharyngeal apparatus.”15 Rokhsar says, “We think this is an ancient deuterostome-specific cluster of genes that is involved in patterning the pharynx.”

This gene cluster is one more piece of evidence affirming the reality of the Creator we share with all living things.

Do we have acorn worm in our ancestral past? Not at all. Since the same basic biochemistry operates in all living things on this planet, it is not surprising that many genes and non-coding DNA sequences are similar or even identical. The existence of homologous genes, like homologous anatomical structures, does not scream “evolution” but is readily explained by the fact that all things—from molecules to man—were designed by the same Creator God.

Previous Article What Does It Mean to Be Human? Next Article Do Proteins in Dinosaur Blood Vessels Map Evolutionary History?