Humps May Have Been Key to Ancient Camel’s Arctic Survival

Camel humps may have been the key to Arctic survival for ancient camels. 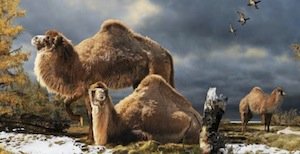 This artist’s reconstruction of Arctic camels mainly differs from modern camels in size. About 30% larger than modern camels, they would have stood nearly 9 feet at the shoulder. Even the collagen from the newly discovered fossil matches the modern dromedary quite well. This picture suggests a forested environment, which is consistent with a post-Flood, pre-Ice Age understanding of the earth’s history from a biblical perspective. Image by Julius Csotonyi, via The Star.1

The discovery of a camel fossil in the high Arctic is changing evolutionary ideas about the camel’s geographic origins. Ellesmere Island, in the Canadian Arctic Archipelago west of northern Greenland, yielded up some fragmentary pieces of fossilized bone in 2006. Researchers announced this week that the fragments from mid-Pliocene sediments belonged to a giant camel.

“This completely changes how we think about the evolution of Paracamelus, which is the form that gave rise to the modern camel,” says lead author of the Nature Communications report, Natalia Rybczynski. Collagen fingerprinting reveals remarkable similarity to modern dromedary camels.

Today, camels are native to arid regions from northern Africa to Asia. Their close cousins—llamas and alpacas—are native to South America. (A recently published creation scientist’s analysis of animal kinds concurs that camels and these humpless South American animals are varieties of the same created kind.)

The sediments associated with the fragments suggest this animal’s habitat consisted of forests and peat-bogs. Beaver, horse, bear, rabbit, and tiny deer fossils are also found within about six miles of the site. Though soft tissue like humps are not ordinarily preserved in the fossil record, the modern camel hump is a fat-filled structure that would have greatly facilitated the survival of this large herbivorous animal through Arctic winter darkness.

Though only fragments were recovered, digital imaging reconstructed them as a tibia with anatomical characteristics typical of a massive hoofed mammal.

Though only fragments were recovered, digital imaging reconstructed them as a tibia with anatomical characteristics typical of a massive hoofed mammal. A collagen “fingerprinting” technique was able to match collagen recovered from the bone—likely preserved so well because of the cold and a coating of iron minerals, Rybczynski suspects—to the collagen variations seen in modern dromedary camels. The collagen also matched that of a giant camel fossil discovered in 2011 in the Yukon, more than 1,200 miles away and over 700 miles to the south. In fact, the peptide markers on the collagen matched the Yukon fossil and the modern dromedary better than the two modern camel species match each other.2 Comparison of the fragments to a modern dromedary camel tibia suggests the Ellesmere camel was 30% taller, making it about 2.7 meters (8.9 feet) at the shoulder.3 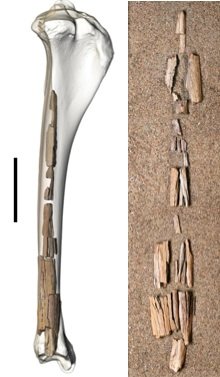 The fragments of camel tibia, shown on the right, were digitally reconstructed and matched up with an upscaled tracing of a modern dromedary camel (Camelus dromedaries). To make the fragments fit, the modern camel tibia had to be scaled up by 30%. The scale bar is 10 centimeters long. Though classified as Paracamelus and conventionally dated at 3.5 million years of age, the collagen match indicates the significant difference between the modern and ancient camel was largely confined to size. Image left by Rybczynski et al., via Nature Communications4; right by Nature Communications, via Science.5

The Yukon camel fossil was found in Pleistocene sediment, but the Ellesmere camel from the mid-Pliocene is conventionally dated much older, at about 3.5 million years. Both are classified as Paracamelus. Paracamelus, considered the ancestor of modern camels, are also found in Europe, Africa, and Asia, where they were thought to have evolved.6 Researchers now contend the Paracamelus evolved in North America.

Note that the collagen fingerprinting of this large camel, presumed to be 3.5 million years old, was a near-perfect match to the modern dromedary camel as well as their Yukon cousin. In fact, the ancient giant camels’ collagen is even a better match than the other species of living camel. No camel evolution is indicated by this discovery.

The findings are actually quite consistent with biblical history. The camel-kind—thought to include llama and alpacas—dispersing from the region of Ararat at the end of the global Flood—would have multiplied like the other animals and spread out geographically. The fatty hump would have served as a great advantage to the animals needing to survive the long, dark Arctic winters.

Pliocene layers are thought by many creation geologists to have been deposited in association with small localized post-Flood catastrophes, since they often contain fossilized creatures in their apparent native habitats, like those found with this camel bone on Ellesmere Island. The million-year dates are based on the unverifiable assumptions used to interpret conventional radiometric dating methods.7

Additional Paracamelus fossils found in Pleistocene layers demonstrate the camels’ presence in the Ice Age. And through all this we see that the camel-kind varied to produce size variations and the different species of modern camels as well as their South American cousins, but camels really haven’t changed all that much. The camel got its new start in the world when it got off of Noah’s Ark, less than 4,500 years ago.