Preserved Cretaceous Collagen and Dinosaur Blood: Common Clues to a Catastrophic Past?

Do blood cells in dinosaur fossils demonstrate an evolutionary link to birds?

Red blood cells and connective tissue may be preserved in dinosaur fossils more commonly than previously thought. This suggestion came from scientists on June 9, 2015 in Nature Communications as they unveiled the Cretaceous cells and collagen they recently found. The study’s authors compared the apparent red blood cells in a dinosaur claw to those of an emu. They attributed their similarity to an evolutionary connection between birds and dinosaurs.

Well-preserved fossils occasionally contain soft tissues like blood and collagen, a fact repeatedly documented since Mary Schweitzer’s controversial 2005 discovery of red blood cells and pliable blood vessels in a T. rex femur fossil presumed to be millions of years old. The fossils harboring the latest serendipitous discoveries, however, are a junk assortment found on the surface at Canada’s Dinosaur Park Formation and left in storage at London’s Natural History Museum. The authors of “Fibres and cellular structures preserved in 75-million-year-old dinosaur specimens” say they appear poorly preserved compared to others in which soft tissue has been found, and there was no external evidence suggesting soft tissue might be present. In fact, they obtained leave to invasively study these fossils, hoping to learn about the fossilization process, because they were not particularly pristine. (As coauthor Susannah Maidment explained, “It’s really difficult to get curators to allow you to snap bits off their fossils.”1) And chipping into six of eight miscellaneous dinosaur bones, they found either collagen fibers (in one), other fibers (in three), or cell-like structures (in two).

Calcified collagen fibers resembling those in rabbit bone were found in a dinosaur fossil of indeterminate type. Some of the actual amino acids making up the collagen protein were still detectable, mass spectrometry confirming that the fragments of amino acids remaining in these fibers are also present in rabbit bone.2 A typical collagen fiber’s banding pattern was even detectable.3 That banding pattern is ordinarily the consequence of the arrangement of multiple folded molecular subunits—the quaternary structure of the protein molecules that make up the collagen. The protein molecules making up collagen are ordinarily held in position by the attraction between various portions of the molecule, so the fact that this structure could resist decay long enough to be preserved is remarkable. 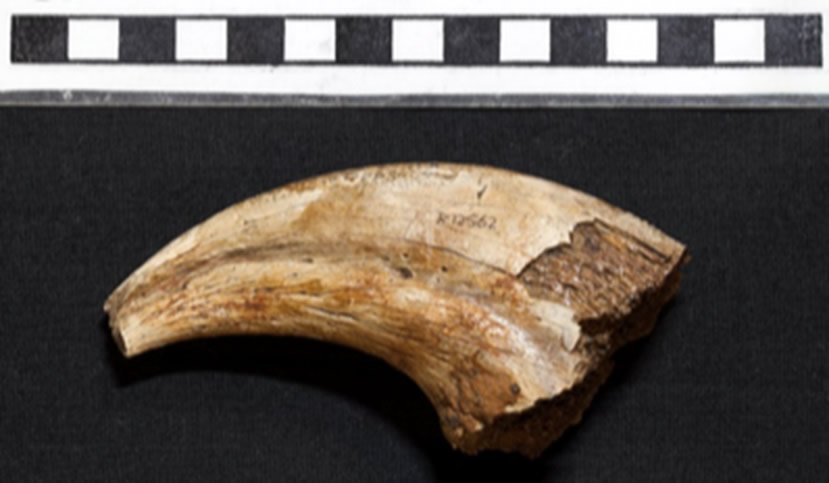 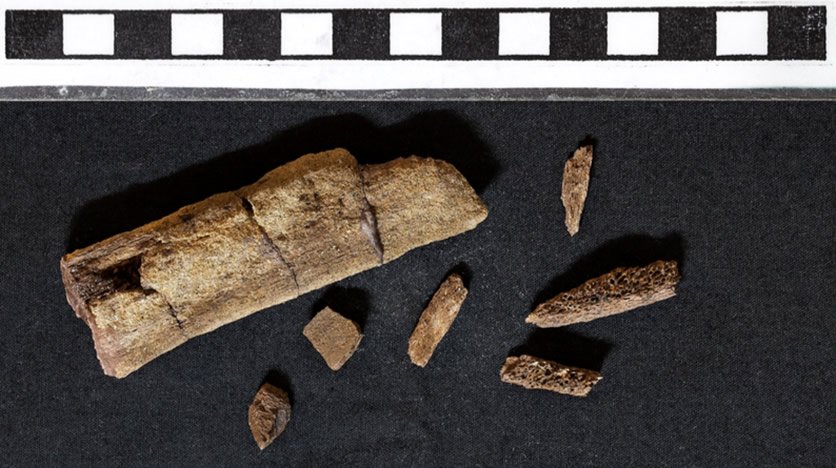 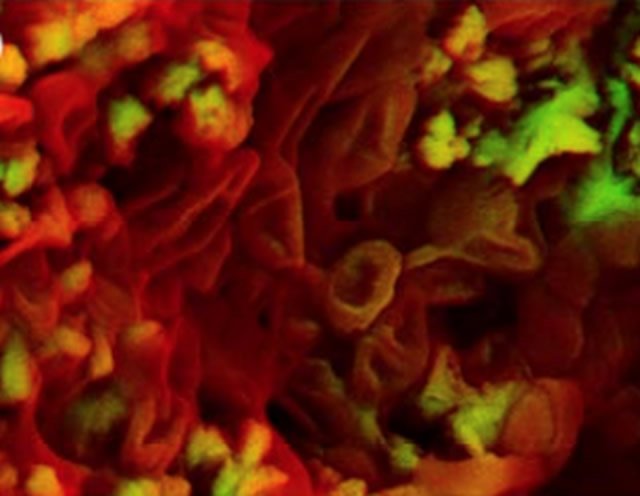 Density-dependent color scanning electron micrography of broken bits of dinosaur claw revealed erythrocyte-like structures, ranging 1.2 to 3.2 micrometers in length (35 of them altogether, averaging 1.8 +/- 0.4). Some of these are shown here in red, embedded in the denser cement-like matrix of the fossil, shown in green. Image courtesy of S. Bertazzo et al., “Fibres and cellular structures preserved in 75-million-year-old dinosaur specimens,” Nature Communications (9 June 2015) 6(7352), http://www.nature.com/ncomms/2015/150609/ncomms8352/full/ncomms8352.html.

Believing that dinosaurs evolved into birds, the team confined their comparisons of erythrocyte morphology and composition to bird blood, specifically to blood from the flightless emu. Lead author Sergio Bertazzo explains, “Bird red blood cells have nuclei and, therefore, a dinosaur red blood cell should have a nucleus.”7 (Incidentally, reptilian red blood cells are also nucleated, though the authors did not mention that in their study.) The authors found that within each of the concave ovoid cell-like structures there was a dense area resembling a nucleus. This was the first time that scientists have been able to visualize the nucleus of dinosaur blood cells.

In addition to the preservation of some cellular architecture, several of the proteins found in blood were detectable in the dinosaur claw’s cells. Iron was not detectable at the cellular level in either the bird blood or the fossils using the techniques applied in this study, but the relative proportions of several compounds found in whole blood matched those detected in the putative dinosaur blood cells. 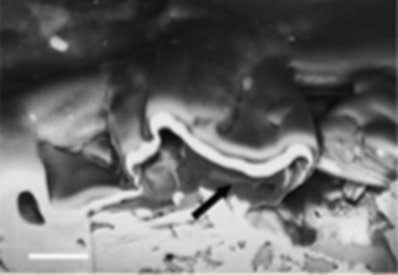 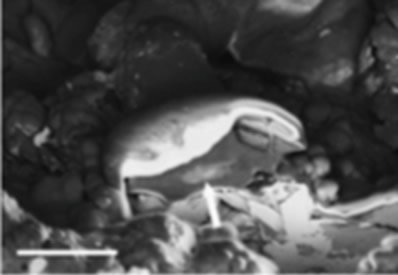 Because red blood cell size can correlate with metabolic rate, the team is hopeful that additional discoveries of preserved red blood cells will reveal whether dinosaurs were warm- or cold-blooded. They admit, however, that the extremely small “putative erythrocytes in the fossil could well have been deformed and it is quite probable that these structures have undergone some shrinkage during fossilization.”8

Such shrinkage may well limit the physiologic clues available even if preserved red blood cells presumed to be millions of years old become a common discovery. But the extraordinarily small size of these cell-like structures should at least raise the possibility that they have been misidentified. Given their remarkably small size, we must at least hold open the possibility that they are not blood cells at all. While the fossilization process that allowed the preservation of these cell-like structures remains a mystery and may have somehow caused them to shrink, one might reasonably expect any such deformation to have altered the shape substantially as the membrane would have remained the same size while the contents shrank.

Initially evolutionists were generally skeptical that soft tissue such as blood cells and collagen could survive for millions of years, and such a response is certainly understandable. Yet as we discussed in “Preservation of Cellular Proteins in Dinosaur Fossils,” molecular studies have confirmed that materials thought to be soft-tissue in those rare dinosaur bones discovered harboring it are genuine, not contaminants or bacterial biofilms. Commenting on the latest discovery, Schweitzer—who in 2013 uncovered one factor that might contribute to such preservation—said, “Papers like this do much to advance the field, by showing that fossils are more than ‘just rocks,’ and opening the door to the possibility that materials persist in ancient fossils that were not thought possible only a few years ago,” and, Schweitzer adds, this “seems to indicate, like our own findings, that this is not necessarily an exceedingly rare occurrence.”9

The Long and the Short of It

Evolutionists have come to largely accept the fact that soft tissues can be preserved in fossils for an extraordinarily long time. But millions of years . . . ? Neither these fossils nor the soft tissue within them bears a label stating their age. The vast ages evolutionary scientists assign to dinosaur fossils and many other fossils are based on their unverifiable presumptions and an associated worldview-based rejection of the age of the Earth found through the straightforward reading of God’s Word. (Read more about this in “Doesn’t the Order of Fossils in the Rock Record Favor Long Ages?”)

Hopefully, ongoing study of the of fossilization itself—this study’s original intent—will reveal more about the additional conditions needed to preserve soft tissue. Maidment says, “We want to understand how this preservation can occur, how far back in time it happens, and what type of rock it happens in.”10 But presumptions about how long such tissue can conceivably be preserved will continue to depend on worldview-based assumptions, for it is impossible to actually observe this process in real-time, whether for several thousand years or 75 million. To propose that fragile protein molecules can be preserved for millions of years begs credulity. Frankly, preservation of a dead dinosaur’s soft tissue for even the few thousand years since the global Flood is remarkable. Yet biblical history provides the basis for an explanation. The global Flood supplied the rapid burial needed to preserve soft tissue beneath huge masses of mineral-laden water-borne sediment requisite for the large-scale fossilization we see in earth’s sedimentary rocks, fossils later unearthed by erosion, excavation, or other means.

Furthermore, to see this study—elegant though it is—as support for the evolution of dinosaurs into birds is short-sighted, worldview-dependent speculation. The resemblance of miniscule dinosaur red blood cells to the larger ones of an emu reveals no more about the origin of birds than the resemblance of the apparent collagen fibers to those of rabbits reveals about the origin of rabbits.

While the extraordinarily small size of the putative dinosaur blood cells raises a bit of a red flag as to their identity, if they are indeed nucleated red blood cells it should be no surprise to discover that ancient dinosaur red blood cells had nuclei! After all, reptiles today have ovoid nucleated erythrocytes. Yet the small size of the cells—possibly an artifact of fossilization—is far out of range for the red cells of both birds and reptiles, rendering meaningful comparison impossible. In any case, experimental biology affirms the biblical truth that animals reproduce, as God designed them to do, only within their created kinds. Nothing about this discovery demonstrates otherwise.

Discoveries about the unobservable past should be interpreted in light of the historical account in the Bible. The actual observations of scientists are consistent with the Bible. And Biblical history comes to us from history’s ultimate eyewitness, God Himself. The remarkable preservation of possible red blood cells and collagen fibers in random dinosaur fossils is consistent with the Bible but does nothing to lend support to evolutionary explanations assigned to them. On the contrary, the soft tissue preserved in these fossilized dinosaur bones cries out, metaphorically speaking, declaring the truth of God’s Word and thus in honor of the God of the Word, Jesus Christ, by whom all things visible and invisible were created (Colossians 1:16–18).