If dinosaurs died millions of years ago, how can their fossils still contain soft tissue?

Scientific debates often can be rather dry, filled with unfamiliar terms and minute details difficult for the lay reader to follow. But over the last five years, a shocking discovery has taken center stage in an intense debate that even children can follow. Soft, unfossilized blood vessels and red blood cells have been discovered in dinosaur fossils! How could soft tissues survive after being buried in rock? 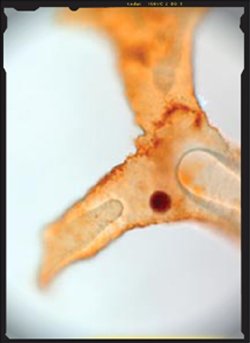 In 2005, a team of scientists found a femur of a Tyrannosaurus Rex that contained intact blood vessels and red blood cells (small circle above). Once freed from the bones, the blood vessels could be stretched—and even snapped back into place!

In 2005, a team of scientists led by paleontologist Mary Schweitzer published a paper in which they described an unusual femur (upper leg bone) of a Tyrannosaurus rex.1 While the outer bone was completely fossilized, the interior regions were somehow sealed off from fossilizing fluids. Inside the T. rex femur were intact blood vessels and red blood cells. Once freed from the bones, the blood vessels could be stretched—and even snapped back into place!

The paper produced a storm of media and scientific attention. At issue: the T. rex fossil is believed by evolutionists to be 68 million years old. How could these biological structures survive intact?

Shortly after, Schweitzer and her colleagues made more headlines with a second paper. This one described intact proteins from the T. rex femur.2 The problem: laboratory tests and theoretical research have shown that proteins similar to those seen in the T. rex fossil degrade too quickly—even in ideal laboratory conditions—to survive for more than a few thousand years.3

In 2008, a paper by paleontologist Thomas Kaye and colleagues challenged Schweitzer’s original findings at their core.4 These researchers had discovered similar soft structures in a whole range of other fossil animals, including several from the same geologic layers as the T. rex (the Hell Creek Formation). Instead of vertebrate blood vessels and cells, this paper documented that all the structures were formed by bacteria some time after fossilization happened. 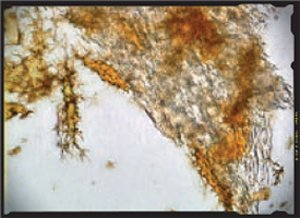 In early 2009, scientists found a fossil of a duck-billed dinosaur that contained a host of soft-tissue structures. The analysis of this fossil (done by multiple, independent labs) concluded the fossil contained collagen, elastin, hemoglobin, and osteocytes.

For example, the “stretchy” blood vessels in their samples were actually tough films, secreted by bacteria. These films looked like blood vessels because the bacteria had coated the holes where the blood vessels once were, leaving behind false “blood vessels.” Kaye’s team also discovered inside these bacterial “vessels” round pyrite (fool’s gold) crystals. They concluded that Schweitzer’s team must have mistaken these for red blood cells (which are round in reptiles and birds, but flattened in mammals). They also discovered similar kinds of organic chemicals as Schweitzer’s team, but from substances made by bacteria. Kaye’s paper seemed to counter most of the Schweitzer team’s evidence that they had found original T. rex tissues.

But in early 2009, Schweitzer and colleagues struck again with a new paper.5 Now a duck-billed dinosaur from the Judith River Formation (below the Hell Creek, and supposedly 80 million years old) was described with a host of soft-tissue structures. Furthermore, the analyses of this fossil were done by multiple, independent labs. Several vertebrate-specific proteins (collagen, elastin, and hemoglobin) were discovered, as were unambiguous osteocytes (bone-forming cells seen only in vertebrate animals).

No one expected soft tissue to be found in dinosaur fossils, but these discoveries really make sense if the bones were buried only a few thousand years ago during Noah’s flood.

The Schweitzer team’s latest paper clearly answers all the challenges posed by Kaye’s bacterial-origin hypothesis.6 In both of Schweitzer’s reports, the claim of dinosaur soft tissue is real.

But this still leaves the bigger question: how could soft tissues survive for millions of years? No experimental results support long-age survival, as the last paper by Schweitzer’s team readily admits. And honestly, no young-earth creationists expected soft tissue to be found in dinosaurs. Perhaps that expectation was an artifact of our training (which is often in evolution-dominated schools). Sometimes evolutionary assumptions are in places we haven’t recognized.

Yet the discovery really makes sense if the bones were buried only a few thousand years ago during Noah’s Flood. One thing is for sure: more creationists will be looking inside more bones to see what treasures are hidden there.

Previous Article One: Life’s Unexpected Explosion Next Article Three: Without a Leg to Stand On