Not old enough for Jurassic Park, this mosquito likely filled up on North American bird blood long ago.

Reachable by raft, Kishenehn Basin’s oil shale in Glacier National Park preserves a rich trove of beautifully preserved fossilized insects. In just five years fossil hunters have collected over 16,000 of these tiny fossils for the Smithsonian National Museum of Natural History. Already representing fourteen different insect orders, the Kishenehn Paleobiology Collection’s most unique specimen to date is a fossilized female mosquito confirmed to have a bulging abdomen full of blood.

“The abdomen of a blood-engorged mosquito is like a balloon ready to burst. It is very fragile,” says fossil finder Dale Greenwalt. “The chances that it wouldn’t have disintegrated prior to fossilization were infinitesimally small.” Not all mosquitos consume blood, but in species that do, only the female requires the hemoglobin of vertebrate blood in order to complete the reproductive cycle. This blood-sated mosquito is a unique addition to the fossil record.

Describing the improbability of preservation, her discoverers—Greenwalt and Ralph Harbach—explain, “The insect had to take a blood meal, be blown to the water's surface, and sink to the bottom of a pond or similar structure to be quickly embedded in fine anaerobic sediment, all without disruption of its fragile distended blood-filled abdomen.”1 Thus, they write, “It is not surprising that a fossil of a blood-engorged mosquito has not been described; this despite the popular misconception of dinosaur DNA recovery from blood-engorged mosquitoes in amber popularized by the 1993 film Jurassic Park.”2 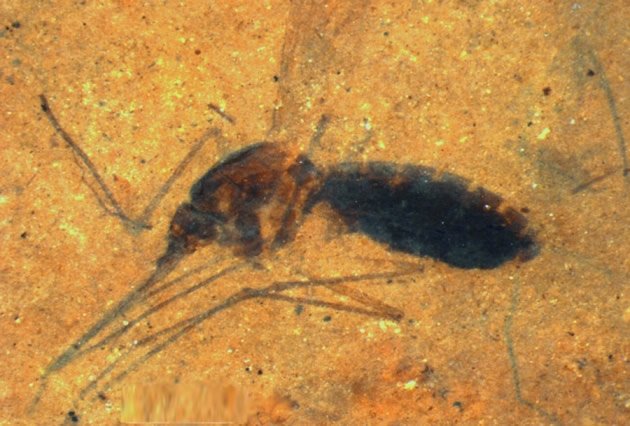 A first from the fossil record, the abdomen of this female mosquito preserved in Montana’s Eocene oil shale is distended by blood from her last meal. Modern mosquitos of this genus usually bite birds. Image by the National Museum Of Natural History, Washington, D.C., via Nature.3

In the movie and book Jurassic Park, dinosaur DNA was recovered from a Jurassic mosquito. Evolutionary paleontologists currently believe that DNA would degrade after 68 million years and therefore do not expect to find any creature’s DNA in this Eocene mosquito. Asked whether ancient mosquitos could have consumed dinosaur blood, Harbach said:

Evidence suggests mosquitoes evolved in the Jurassic Period (200–146 million years ago). If the early ancestral mosquitoes had already evolved to feed on blood, it is conceivable that they may have fed on dinosaurs.4

Found in early Middle Eocene oil shale exposed along the Middle Fork of the Flathead River near Coal Creek in Montana’s Glacier National Park, the remarkable mosquito is reported to be 46 million years old on the basis of conventional dating using 40Ar/39Ar analysis. Greenwalt and Harbach have unearthed a number of fossilized representatives of the mosquito genus Culiseta there.5 The two species they found—C. kishenehn and C. lemniscata—are quite similar to modern members of that genus, including the culprits that bite birds and carry equine encephalitis, which is similar to West Nile viral encephalitis, a disease that only arrived in North America at the end of the 20th century.

Harbach, describing the modern qualities of these fossilized insects, said:

Although 46 million years old, they look very similar to some living species of the same genus Culiseta. Culiseta kishenehn bears close resemblance to the living North American Culiseta melanura, which is a vector of Eastern and Western equine encephalitis viruses (EEE and WEE).

These viruses quickly infect the brains of horses and cause paralysis and often death. EEE can infect amphibians, reptiles, birds and mammals, including humans. And there is currently no cure for the human form which is sometimes fatal.

There were no horses or humans during the Eocene epoch and many living species of Culiseta feed on birds. So these ancient mosquitoes probably fed on birds too. However, mosquitoes are basically opportunistic and feed on other types of animals if their preferred hosts are unavailable.6

The Proof’s in the Porphyrins

How do scientists know the tiny fossilized mosquito’s abdomen contains blood? Comparing her to a male mosquito fossil from the same location, they found the two components of vertebrate hemoglobin preserved in the female. Hemoglobin, the oxygen-carrying substance in blood, contains iron bound to organic molecules called porphyrins. Both iron and porphyrins are localized in the female’s distended abdomen.

Iron, which is bound in hemoglobin to organic molecules called porphyrins, was 8 times more concentrated in the region of the bulging belly than in the male or in the female’s thorax.7 There was not enough sulfur present to suggest the iron was merely leached in from surrounding iron pyrite, a common sulfur-containing mineral.8

A non-destructive form of mass spectrometry confirmed unequivocally that porphyrin molecules are present in the mosquito’s swollen abdomen. And while other iron-associated porphyrins can be associated with aerobic microbes,9 they should not be significantly preserved in the anaerobic conditions required to fossilize this little insect. Furthermore, no evidence of microbial infestation was found, nor would a microbe population have been confined to the female mosquito’s abdomen.10

“This shows that details of a blood-sucking mosquito can be nicely preserved in a medium other than amber,” according to another paleo-insect expert, George Poinar,11 who discovered a mosquito carrying malarial spores in Dominican Republic amber. Poinar adds, “It also shows that some porphyrin compounds in vertebrate blood can survive under the right conditions for millions of years.”12 Greenwalt notes that this discovery adds weight to Mary Schweitzer’s claims about the preservation of dinosaur blood and bone-related cellular material and soft tissue through deep time.

The blood-sucking behavior of mosquitos and the diseases they carry developed in the wake of man’s rebellion against God.

The evidence that this mosquito contains the preserved molecular components of vertebrate blood in her abdomen is rock solid. The gentle method of her preservation proposed by Greenwalt and the mosquito’s “argon-based” age rest on considerably shakier ground. The sudden catastrophic burial of this mosquito and countless other creatures beneath tons of water borne sediment associated with the global Flood explains the findings far more believably and is supported by the biblical historical record. Much of the fossil record is a record of the order of burial of organisms as their habitats were destroyed.

None of the fossil record, on the other hand, is a record of the evolutionary appearance of organisms, as all kinds of living things were created in the space of six days, a fact recorded in Genesis and confirmed by God’s own hand in Exodus 20:11. It is thus no surprise that this mosquito resembles modern mosquitos. The Eocene shale’s 46-million-year age is derived from worldview-based unverifiable interpretations of radiometric dating methods. This date is completely inconsistent with God’s eyewitness account of earth’s 6,000-year history provided in His Word.

God’s perfect creation included humans and horses and harmless mosquitos. The blood-gorged mosquito in Montana’s Eocene shale as well as mosquito-borne diseases are symptoms of sin’s curse on a perfect world. The blood-sucking behavior of mosquitos and the diseases they carry developed in the wake of man’s rebellion against God. Read more about mosquitos past and present in the The Genesis of Malaria.

Previous Article Was the Medieval “Little Ice Age” Triggered by an Indonesian Volcano? Next Article Did Our Ancestors Evolve Into Humans Feet First?