Photo by Wolfgang Hasselmann, via Unsplash.

The Bible Wins the Debate with Carbon-Dated Camel Bones

Several times during the 2014 Nye-Ham Debate, Ken Ham referred to history recorded in the Bible to answer questions Nye called “great mysteries.” Statements springing from the study of camel bones found in ancient copper mines south of the Dead Sea have challenged the historicity of the Bible. However, a closer look at the claims readily shows that the Bible stands.

Archaeologists claim camels weren’t domesticated in the Middle East until a millennium after the Bible records their use. God’s Word records Abraham had camels with him when he visited Egypt (Genesis 12:16)? That visit took place around 1900 BC.

Tel Aviv University archaeologists Lidar Sapir-Hen and Erez Ben-Yosef, who have been exploring ancient Aravah Valley copper mines between the Red Sea and the Dead Sea, decided to take a crack at the camel question. The camel question is not a new one, and they are not the first to dispute the Bible’s historical accounts of camels. Sapir-Hen and Ben-Yosef are the first, however, to publish a study dogmatically drawing down the numerical power of carbon dating upon the biblical accounts.

Even though the Bible describes the use of camels by Abraham, Joseph, and Jacob, some modern liberal scholars insist the camel did not achieve importance as a pack animal until the early Iron Age and not before the 12th century BC.1 According to a press release from the American Friends of Tel Aviv University (AFTAU), “Archaeologists have shown that camels were not domesticated in the Land of Israel until centuries after the Age of the Patriarchs (2000–1500 BCE). In addition to challenging the Bible’s historicity, this anachronism is direct proof that the text was compiled well after the events it describes.”2 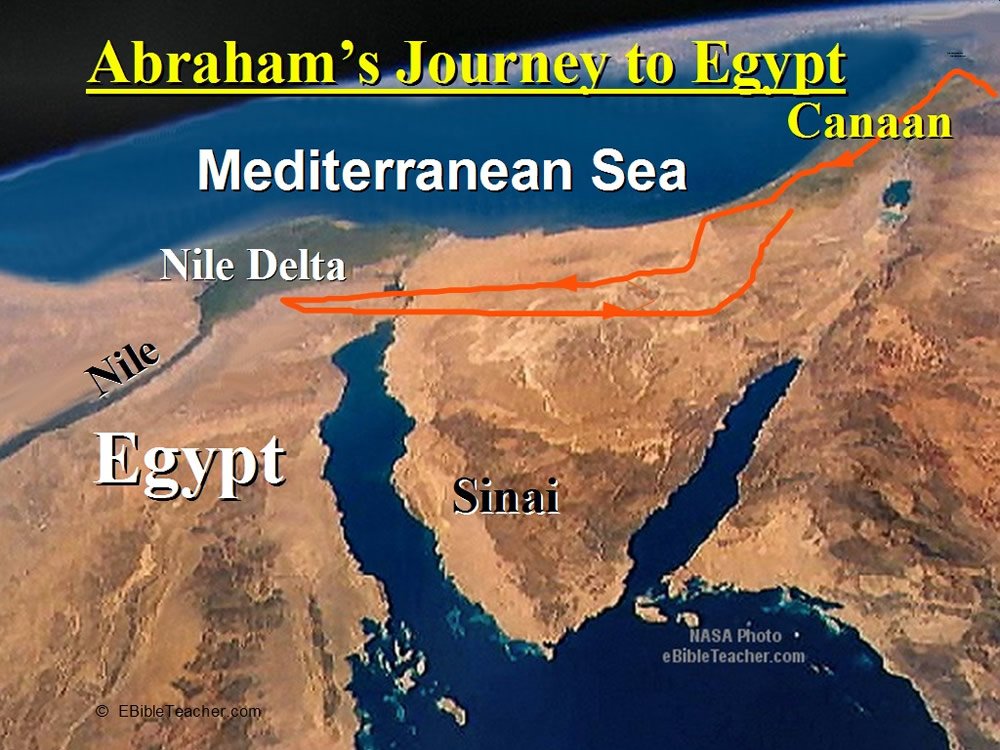 This NASA aerial photo from eBibleTeacher.com has Abraham’s travels to Canaan, to Egypt, and back traced in red. As documented in the Bible, Abraham continued to live nomadically in Canaan for the rest of his life. The ancient Aravah Valley copper mines, from which camel bones were recently dated to the 900s BC, are far to the east of the area where Abraham lived. The camel bones may mark the later importance of camel-dependent trade routes between the Arabian Peninsula (to the right, east, on the map) and the land nearer the Mediterranean. The absence of camel bones datable to the time of Abraham (around 1900 BC) in these copper mines, however, does not mean that Abraham and his contemporaries did not use camels as pack animals just as the Bible describes. Image from eBibleTeacher.com.3

The Aravah Valley was an important place in the economy of the Middle East by the time of King Solomon, and trade routes naturally traversed the area. The copper mines of the valley are thought to have been on trade routes between the Arabian Peninsula and the settled lands nearer the Mediterranean. Camels would probably have been better able to meet mine-related transport demands than donkeys or mules.

Camels were well-suited to handle the rigors of long journeys along Middle Eastern trade routes. They became a vital part of the economic strength of the region described in the Old Testament. But when did they begin making their contribution to the economic health of the lands at the crossroads of three great continents?

“The introduction of the camel to our region was a very important economic and social development,” Ben-Yosef says. “By analyzing archaeological evidence from the copper production sites of the Aravah Valley, we were able to estimate the date of this event in terms of decades rather than centuries.”

Because carbon-dated camel bones abruptly appear in the strata of the ancient copper mines in the region, Sapir-Hen and Ben-Yosef report they “have used radiocarbon dating to pinpoint the moment when domesticated camels arrived in the southern Levant, pushing the estimate from the 12th to the 9th century BCE. The findings,” according to the AFTAU, “further emphasize the disagreements between Biblical texts and verifiable history.”

The carbon dates assigned to the Aravah Valley camel bones—the late 900s BC—are decades too late to have been left there during the time of Kings David and Solomon, according to Sapir-Hen and Ben-Yosef, and they are centuries too late to confirm a domesticated camel presence during Abraham’s day. They suggest that the camel-based economy became important after the rise of Egyptian power in the region.

“Our results have direct implications on dating the beginning of the Arabian trade and the many related economic and social phenomena.” Sapir-Hen and Ben-Yosef write. “As most probably significant trade between southern Arabia and the Levant was not feasible before the use of camels as pack animals, it could not have commenced before the last third of the 10th century BCE.”

In examining the challenge based on these copper-mined carbon dates, we need to consider both the calibration of the technique and the historical context of the claims. Clearly the AFTAU assumes the Bible’s history is neither historically accurate nor verifiable. In this instance, they are defining “verifiable” as that which can be assigned a scientifically trustworthy date. So how trustworthy are carbon dates for the times encompassed by the Old Testament?

Carbon dating for the times described in the Old Testament was calibrated in accordance with dates drawn from Egyptian history.

Like all clocks, the “clock of carbon-dating” must be calibrated. Unfortunately, carbon dating for the times described in the Old Testament was calibrated in accordance with dates drawn from Egyptian history.

Even most secular Egyptologists now agree that the traditional timeline of ancient Egypt history is in disarray. Traditional Egyptian chronology was developed in the 19th century, and for a long time it was the only archaeological yardstick available to date the history of other ancient near eastern people. However, later datable discoveries in other ancient civilizations were not reconcilable with traditional Egyptian chronology. While there continues to be disagreement about the correct dates for events in Egypt’s history, revisions to the traditional Egyptian timeline have been largely in the direction of agreement with the Bible’s accounts.

Carbon dating as calibrated by traditional Egyptian dates, however, has suffered.4 In addition to the historically fuzzy dates by which carbon dates were calibrated, the interpretation of carbon dates suffers from the same sorts of assumptions affecting other radiometric methods. (Read more about it in “Carbon-14 Dating” and “Radiometric Dating: Problems with the Assumptions.”) Thus, to claim accuracy “within decades” using a method that has been systematically afflicted with at least a six century error (see footnote #3) is not reasonable. This study should in no way lead anyone to suspect the economy of King Solomon’s Israel was any less magnificent and internationally significant than that described in the Bible.

Yet even beyond the technical issues with the dating methods, could there be other reasons that might allow for the presence of domestic camels in the herds of Abraham while they were not yet a prominent feature between the Dead Sea and the Gulf of Aqaba? A look at the map should make the answer clear.

There is no reason to assume that the abrupt appearance of camel bones at a certain level in the copper mining region of the southern Aravah Valley precludes their use as pack animals by Abraham and his nomadic neighbors. Abraham entered the Levant from a northerly route, visited Egypt, and returned to the Levant where he remained the rest of his life. Whether or not camel-dependent trade routes across the Aravah Valley into the Arabian Peninsula were yet established has no bearing on the use of camels by people in the more westerly portions of the Levant. And while Egypt’s domination of the region after the time of Solomon could well have resulted in more intensive use of camels through the valley, that also in no way demonstrates that camels weren’t used as pack animals elsewhere in the Levant for millennia before that.

When quizzing the past for its historical secrets, historians must rely on written accounts recorded by people who were there. So-called “higher critics” of the Bible, however, have since the 19th century claimed that the history of the Old Testament was written centuries after the writers claim to have written down God’s Word under His inspiration. This was the only way those critics who did (and do) not believe in God’s power to prophesy of coming events could explain away the accuracy of God’s historical predictions. The claim by the AFTAU that these carbon-dated camel bones prove the Hebrew writers were just trying to create a great history for their nation is just more of the same. But, as we can see from the history of carbon dating’s fallible calibration as well as the historical geography evident from a quick look at a map, there is no reason to question the reliability of God’s Word.