Where do fleas come from? From other fleas. But evolutionists have had a hard time constructing their history of the flea. Last year the discovery of fossilized giant fleas in Chinese formations conventionally dated at 165 million years revealed that, while giant fleas had some variations distinguishing them from modern fleas, they were still fleas. However, there remained in this scenario “a considerable gap”1 between the evolutionary ancestors of modern fleas and today’s fleas that torment animals and people. The recent discovery of medium-sized fleas in China’s Yixian Formation (conventionally dated 125 million years) supposedly fills in the “early evolutionary history” of the flea.2

“The new finding greatly improves our understanding of the morphological transition to the highly specialized body plan of extant fleas,” write the authors of the study published in Current Biology. “However, saurophthirids [the family name assigned to the new discoveries] also display several features unknown in other fleas, and some of these features are suggestive of a possible ectoparasitic [parasite on the outside of the body] relationship to contemporaneous pterosaurs, though other possibilities exist.”3

The giant fleas in the rock assigned the oldest age are called Pseudopulicidae. They range 0.8 to 2.1 cm in length, fairly hefty compared to modern fleas typically 0.2 cm long (but ranging 0.1 to 1.2 cm). (2.1 cm is about four fifths of an inch.) 4 The researchers report the legs do not seem to have the adaptations that equip the modern flea to jump away from its prey’s attempts to eject it. And the giant flea’s sturdy siphoning mouthparts are more serrated than the smoother, delicate siphons of modern fleas. 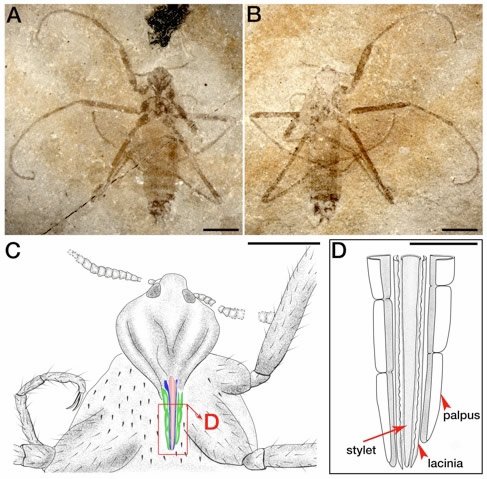 This is one of three fleas recently found in China’s Yixian Formation. Named Saurophthyrus exquisitus, it is about one centimeter long. Like modern fleas, the piercing sucking mouthpart (shown in the mirror-imaged line drawings, with its parts labeled) is smooth. A larger extinct flea found in the same region last year had a somewhat serrated siphon. Images: Chungkun Shih, www.livescience.com.

The newly discovered flea, named Saurophthyrus exquisitus, is about 1 cm long (about two fifths of an inch) and has smoother mouthparts than Pseudopulicidae. The researchers believe they have discovered the transitional form needed to span the gap in flea evolution.

They suggest that the 165 million year old variety evolved to feed by puncturing tough dinosaur skin with its tough saw–like siphoning mouthpart. “The flea needed to cut through the thick skin to get to the blood, and they could do that harm without the host knowing it,” explains study coauthor Chung Kun Shih.

Suspecting a smoother siphon would provoke less of a response from prey than a serrated siphon, the researchers suggest that Saurophthyrus evolved to munch on the blood of thinner skinned flying reptiles like pterosaurs. Shih explains that a bite from a sharp smooth siphon “would be harder to detect by the host.” The researchers further propose that fleas continued to coevolve with the available target animals until tiny fleas with tiny smooth siphons and long hind legs able to spring out of harm’s way evolved to feast on the very sensitive skin of modern mammals.

While these variations in flea anatomy are great examples of flea biodiversity, past and present, they do not actually demonstrate an evolutionary origin of fleas from non-fleas. Nor do they demonstrate acquisition of anatomical features inconsistent with what would be expected for fleas.

We have no way of knowing the average size of the fleas contemporary with those few found in the fossil record.

Getting smaller is not evidence of evolutionary progress. And while media reports hail the most “primitive” fleas as two-centimeter “giants” and the “transitional” fleas as one-centimeter intermediates en route to becoming today’s tiny specimens, the range of sizes actually reveals considerable overlap. Some modern fleas are larger than the more recently found Saurophthyrus specimens, and some Pseudopulicidae specimens were substantially smaller than the two-centimeter giants found with them. Furthermore, though the largest fossil fleas are nearly twice the size of the largest modern flea, we have no way of knowing the average size of the fleas contemporary with those few found in the fossil record, since we have no way of knowing how representative those large specimens actually are.

Fleas today fill many ecological niches, and they have doubtless done so for thousands of years. While some extinct fleas may have been adapted to feast on food sources now extinct, it is possible that the variations seen on extinct fleas may have equipped them for feasting on plants rather than living a parasitic life. Fossils do not eat, of course, so we can only guess about the dietary habits of the more saw-toothed fleas. After all, biblical history—which includes our Creator’s eyewitness account of His work of creation about 6,000 years ago—describes a world in which animals would have lived on plants, not one another’s blood.

From a biblical point of view, even parasitic creatures are not really hard to understand. Genesis informs us that God created a world in which the animals subsisted on plants (Genesis 1:29–20). And from Exodus 20:11 and other verses we know that God completed His work of creation—which would have included the various kinds of insects—in six days. Death and bloodshed did not enter the world until after Adam sinned. Since God designed the original creation to be “very good” (Genesis 1:31), we can be confident that this vegetarian design was sustainable indefinitely. Thus the original fleas could not have been parasitic.

Sin’s curse (Romans 8:20–22) marred the good world God made, and certainly the global Flood about 1,700 years later led to dramatic changes in the environment. We cannot know when various organisms acquired their parasitic lifestyles. Natural selection and other factors acting on the variations within the genomes of the created kinds of organisms would have rewarded those best equipped to survive with reproductive success, ultimately producing the varieties we see today. Yet none of this scenario requires the evolution of new and more complex animals. Parasite-host relationships make sense as the logical result of the interaction and interdependence of variations that developed within the limits of the created kinds.

Previous Article From Bacteria to Giraffes: Adapting Reality to Fantasy Next Article Bees Bond on the Right