Does the Chesapeake Bay crater memorialize a meteorite impact from the time of Noah’s Flood?

Chesapeake Bay has been in the news since a United States Geological Survey (USGS) team reported they have found, half a mile underground near the bay, remnants of “the oldest large body of ancient seawater in the world.” They estimate the water is 100 to 145 million years old but believe it was trapped and preserved when an asteroid or other piece of space debris slammed into the Late Eocene North Atlantic 35 million years ago.

While remnants of Comet ISON will come nowhere close to the earth, the earth’s surface is scarred by impact craters from chunks of space debris (primarily asteroids and meteorites) that have survived their trip through our atmosphere to strike the earth’s surface. The geography of Chesapeake Bay appears to have been produced by just such a catastrophic collision. Though Chesapeake Bay is easily seen from space, the 56-mile wide crater cradling it is somewhat shallower and smaller than the famous 124-mile wide Chicxulub crater in Mexico, presumably produced by a miscreant asteroid popularly credited with causing dinosaur extinction.

The Chesapeake Bay impact crater is “the largest crater discovered so far in the United States, and it’s one of only a few oceanic impact craters that have been documented worldwide,” says USGS hydrologist David Powars. The crater was discovered 14 years ago. The crater helps explain some of the unusual geological features of the region, such as earthquakes that occur at its perimeter, rapidly rising sea level around Norfolk, and “salty groundwater” in the area. The USGS team was drilling near Chesapeake Bay to study how the earth’s crust responds to asteroid impact. “We weren’t looking for ancient seawater,” Powars adds. 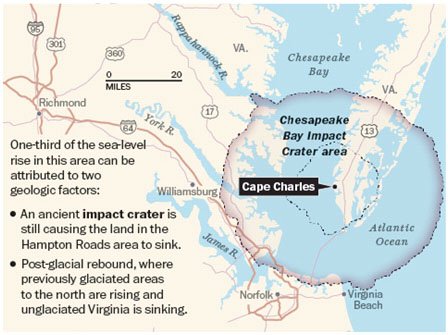 While investigating the earth’s crust beneath the Chesapeake Bay impact crater, United States Geological Survey scientists discovered extremely salty water trapped in the deep sedimentary rock layers. They believe this water was sealed in when an asteroid struck an ancient ocean. Image from The Washington Post.

“What we essentially discovered was trapped water that’s twice the salinity of [modern] seawater,” says USGS hydrologist Ward Sanford. “In our attempt to find out the origin, we found it was Early Cretaceous seawater. It’s really water that’s from the North Atlantic.”

So what these investigators have found and analyzed is not North Atlantic sea water, but saline water from the Flood.

Finding salty water deep underground in drilling sites is not uncommon, as underground salt deposits are also common. But the USGS team, Sanford said, “didn’t hit any salt while drilling.” Furthermore, researchers were intrigued by the fact that this water was twice as salty as typical modern ocean water and has a higher concentration of chlorides and bromides than expected. The chemistry of the water, they wrote in their report, seemed to match that of “vast halite deposits created during the Jurassic and Cretaceous periods in the Gulf of Mexico and South Atlantic Basins.”

Though they admit their helium dating method required “a large extrapolation” and was “far from precise,” giving an age of 100 to 260 million years, they report the very salty water they have found is probably only 100 to 145 million years old, based on the commonly accepted age of the strata layers and their contained fossils from where they believe the water was originally stored.1 While that doesn’t even approach the supposed 1.5 to 2.64 billion year age of the sparkling water in a Canadian mine near Timmins, Ontario, researchers are still excited about the possibility of learning more about the North Atlantic of the remote past. “The ancient seawater was preserved like a prehistoric fly in amber,” the USGS reports. “Up to this point,” says USGS scientist Jerad Bales, “no one thought that this was North Atlantic ocean water that had essentially been in place for about 100 million years.”

Super-salty or not, the original source of this seawater—the “Early Cretaceous North Atlantic”—was deduced on the basis of dates derived from a number of unverifiable worldview-based assumptions and then further qualified using the presumed dates of fossil strata and their contained fossils. As Answers in Genesis geologist Dr. Andrew Snelling explains:

In this investigation the only reason this trapped very saline groundwater was identified as Early Cretaceous North Atlantic sea water was because helium gas in the groundwater was used to date it. This was done by comparing the quantities of the helium-4 atoms in this groundwater with quantities of the helium-4 atoms in groundwater samples from wells tapping the Potomac Formation in nearby Maryland. The Maryland groundwater’s content of the helium-4 atoms had been dated at 10,000-30,000 years old using carbon-14 atoms and at up to 5 million years old using chlorine-36 atoms. Of course, both those methods are fraught with difficulties and documented inaccuracies because of the tenuous assumptions on which they are based, not least the assumption that the rates of formation of these atoms have always been the same as today’s measured rates.

The age of the Chesapeake Bay crater’s very saline groundwater was then determined by extrapolating to its helium-4 composition from the helium-4 compositions of the dated Maryland groundwater, a technique the authors of this investigation admitted was a “large extrapolation” and “far from precise.” The age of the Chesapeake Bay crater’s groundwater determined by this technique was thus reported as 180 ± 80 million years, that is, the age is between 100 and 260 million years old. But in the end they settled for 100-145 million years old as the age of the crater’s saline groundwater, because that is “stratigraphic-fossil age” of the Potomac Formation in which they believe the groundwater originally was. One wonders why they even bothered with using the helium-4 dating technique!

Dates aside, the Chesapeake Bay crater and the water apparently trapped beneath it when it was formed are a record of the region’s close encounter with an invading chunk of space debris. Dr. Snelling explains:

There is little doubt the Chesapeake Bay crater exists and occurred as a result of a meteorite, comet or asteroid impact at the end or very soon after the Flood in the aftermath of the Flood. There is very good evidence such as shattered rock called breccia, and rock consisting partly of melted material, typically forming a breccia containing glass and crystal or rock fragments, called suevite, that seems only explainable as an impact crater.

It is hardly surprising that extremely saline groundwater was found at depth in the impact deposits in this crater, given that groundwater is known to become more saline if it sits trapped stagnant at depth. The paper reports on similar saline groundwater found in other deeply buried sedimentary rock layers along the US Atlantic coastal margin.

This investigation concluded this very saline groundwater was Early Cretaceous North Atlantic sea water that had been originally trapped in the Lower Cretaceous Potomac Formation sedimentary rock layers when they were deposited and in the upper crystalline basement they sit on. Both of these rock units were shattered by the impact, contributing their broken remains to the impact crater layers that were penetrated by the US Geological Survey drill-holes, and from which this very saline water was obtained.

So when did the chunk of space debris smack into the Chesapeake? Can we determine when or where the trapped water originated? By comparing the discovery to the historical record of the global Flood recorded in Genesis, we can get a pretty good idea. Dr. Snelling explains:

Now the Lower Cretaceous Potomac Formation sedimentary rock layers were likely deposited late in the Flood, when it is not surprising the Flood waters were very saline, given all the hot saline volcanic fluids that were added to them from the “fountains of the great deep” mentioned in the God-given and eyewitnessed Genesis account of the global Flood cataclysm.

So what these investigators have found and analyzed is not North Atlantic sea water, but saline water from the Flood trapped in the sedimentary rock layers deposited from those Flood waters.

In any case, given that the finally accepted “age” was that based on the uniformitarian and evolutionary assumptions about the slow deposition of the sediments and the naturalistic “development of life,” there is no biblical reason to accept those millions of years when God’s inerrant eye-witness account indicates the fossils are creatures that were catastrophically swept away and buried in the rapidly accumulating sediments deposited by the waters of the global Flood cataclysm only about 4,350 years ago.

In sorting through the observable facts of the USGS discovery and sifting away the worldview-based interpretations that simply assume the earth must be billions of years old and interpret observations accordingly, therefore, we see that the surprises hidden beneath the earth’s surface—like the other observable facts in science—are consistent with the history provided by God’s eyewitness accounts of our past in His Word.

This rock-trapped seawater—sealed into an Eocene tomb around the time Noah’s Flood ended—is a reminder of the global Flood of God’s judgment on a wicked world (Genesis 6–9), and may well even be leftover from that time. Yet even as the Ark provided safety for Noah’s family as they availed themselves of God’s grace (Genesis 6:8, 1 Peter 3:20), so today we still understand that God’s grace in the face of eternal judgment is freely available (2 Peter 3:5–9) to those who trust in Jesus Christ for salvation from the power and penalty of sin.