by Dr. Elizabeth Mitchell on May 17, 2014
Featured in Answers in Depth
Share:
Email Using:
Gmail Yahoo! Outlook Other

Are the chemical signatures in a faint galaxy the fossil remnants of our universe’s birth?

Chemical analysis of Segue-1, the faintest known galaxy, reveal that it is an unevolved fossil remnant of the early universe, according to scientists who have analyzed it spectrographically. Since the spectral signatures of the seven red giant stars in Segue-1 indicate those stars consist almost entirely of hydrogen and helium, the researchers reporting in the Astrophysical Journal believe Segue-1 represents the earliest observable state of stars in the early universe.

“Segue” is an acronym for Sloan Extension for Galactic Understanding and Exploration. The Segue project has mapped nearly 230,000 stars with a range of spectral types forming a sort of halo to our Milky Way Galaxy. “Encoded within the spectral data,” Segue planners write, “are the composition and temperature of these stars, vital clues for determining the age and origin of different population of stars within the Galaxy.”1 Because of their observed composition, the seven red giant stars described in the recent report are thought to be chemically primitive remnants of the early generations of star formation by those who believe the first stars formed spontaneously through the contraction of big bang-produced hydrogen and helium.

Because the electrons orbiting atoms of each element have their own characteristic energy levels, each element absorbs various wavelengths of light in a characteristic fingerprint-like pattern. Thus astronomers can determine the elements present in a star or in a gas cloud or other region of space illuminated by starlight. Using this technique researchers have analyzed seven red giant stars in the dwarf galaxy Segue-1. Spectra from the seven red giants show that they have hardly any elements heavier than hydrogen and helium. 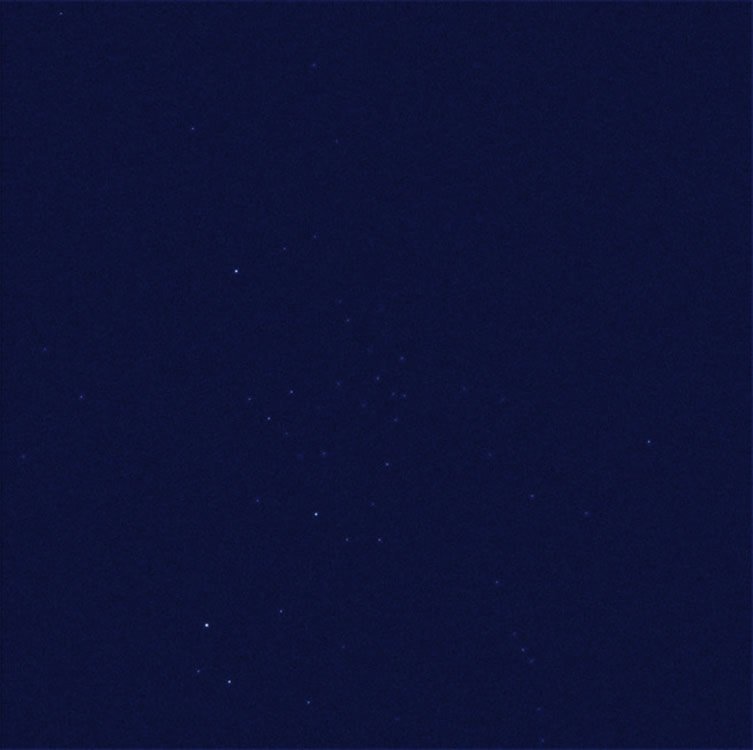 The faint stars of the Segue11 are shown here (you may need to squint!). The Segue project maps stars that are located just beyond the Milky Way. Image by Marla Geha, via Sci-News.com.2

Extrapolation to the Past

“Our work suggests that Segue-1 is the least chemically evolved galaxy known,” Carnegie Institute’s Josh Simon says. “After the initial few supernova explosions, it appears that only a single generation of new stars were formed, and then for the last 13 billion years the galaxy has not been creating stars.”

Big bang theory indicates that the big bang could not have produced any elements other than hydrogen, helium, and a little lithium. Therefore evolutionary astronomers believe the original stars were formed by contracting gas clouds of just these elements. They believe that all other elements in the universe formed through the fusion of these elements into heavier ones, like magnesium, silicon, and calcium, which were subsequently scattered into the universe as stars exploded in supernovae. They think these elements got incorporated into subsequent generations of stars and fused to make heavier elements like iron, which when blown out in to the universe by lots of supernovae was presumably incorporated into planetesimals and eventually aggregated into planet cores. (This is the concept of stellar nucleosynthesis. Read more about it at A Discussion of Stellar Nucleosynthesis.)

According to big bang beliefs, then, the very oldest stars should be “Population III” stars consisting of just hydrogen and helium. No Population III stars have ever been discovered, which is a glaring lack of evidence in the big bang belief system. The researchers interpret the comparatively iron-poor, barium-poor, strontium-poor composition of the seven red giants in Segue-1 as evidence that Segue-1 is only one generation removed from the big bang. They therefore believe Segue-1 reflects the conditions that existed shortly after the big bang.

“The heaviest elements in this galaxy are at the lowest levels ever found,” says lead author Anna Frebel of the Massachusetts Institute of Technology. “This gives us clues about what those first supernovae looked like.” Our own sun contains less than 2% of elements heavier than hydrogen and helium. Three of the seven red giants analyzed in Segue-1 have 3000 times lower “heavy” element compositions than our sun. Frebel says, “Having found such a fossil galaxy is of enormous importance to astronomy, because it provides a new window into the first galaxies.”

There are a lot of physics problems with the evolutionary notion of how the stars came to be.

The analysis of these stars has shown us some stars with an unusual “lightweight” composition. But the interpretation of these observations as snapshots of the early universe are completely grounded in worldview-based big bang speculation about the origin of the universe. (You can read about many of the problems with the big bang theory in “Big Bang—The Evolution of a Theory” and “Problems with the Big Bang.”)

The low metallicity of Segue-1 is observable. (To astronomers, anything heavier than helium is a metal.) But the idea that low metallicity demonstrates an origin proximate to the big bang—that Segue-1 stars are first-generation “big bangers”—is purely speculative, a symptom of implicit faith in an ancient star-forming process that defies physics.

This interpretation relies on the belief that stars formed from spontaneously contracting clouds of gas and dust. Stars supposedly form when swirling gas cools and condenses until it is dense enough to possess enough gravity to prevent re-expansion. However, gases tend to expand, not contract. Furthermore, if a swirling mass of gas contracted, it would spin faster in order to conserve angular momentum, and that increased angular velocity would oppose ongoing contraction. Finally, the great increase in the magnetic field that would accompany the massive collapse of gas would oppose the shrinkage needed to form a star. Thus there are a lot of physics problems with the evolutionary notion of how the stars came to be.

God, our Creator, provided His eyewitness account of the sequence of events in the first week of the universe’s existence in Genesis. He summed it up in Exodus 20:11 by saying that in just six days He made the heavens and the earth, the sea, and all that is in them. God told us in Genesis 1:16–19 that “He made the stars” on the 4th day of Creation Week. The Bible’s history is not at odds with scientific observations. Low metallicity just describes the composition of the seven red giants in Segue-1, not an indicator of when and how they came to be.