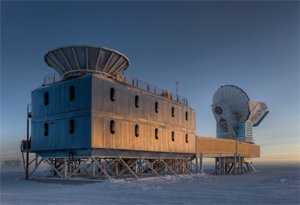 Astronomers claim they finally have tangible proof of the big bang, thanks in part to a radio telescope in Antarctica that detected gravitational waves.

In March, media reported that a group of astronomers had found proof of the big bang. What exactly did the scientists find? They claimed evidence of cosmic inflation, a necessary part of today’s big bang model. The big bang has been the standard cosmology since the discovery in 1965 of the cosmic microwave background (CMB), a radiation field that fills the universe and supposedly originated a few hundred thousand years after the big bang.

The CMB was supposed to be proof of the big bang, but there was one problem. It was the same temperature in every direction, which didn’t seem to make sense. Around 1980, cosmologists began to develop the idea of cosmic inflation to solve this and other problems with the big bang. Cosmic inflation is a hypothetical episode of very rapid expansion in the very early universe. Inflation is different from normal cosmic expansion, in that inflation was far faster than the speed of light. There is no known reason inflation may have happened, nor was there any evidence for it, but nearly all scientists accepted the idea because without it, the big bang model doesn’t work.

Cosmologists theorized that if inflation had happened, it could have left a subtle polarization pattern in the CMB. The expected pattern is difficult to detect and measure; but inflation is so important to the big bang model that many teams of researchers were looking for it. The announcement this spring was the first claim that the expected polarization pattern had been detected.

Does this discovery prove the big bang? No, but the first confirmed evidence of inflation will probably win its discoverers the Nobel Prize in physics. Given this powerful incentive, some scientists think the announcement is premature and the result may not stand up to scrutiny. Even if the data are confirmed, there are other mechanisms besides cosmic inflation that could mimic the signal researchers are claiming to have found.

What does this result mean for those who believe in biblical creation? The big bang requires that the universe be billions of years old, but we know from Scripture that the world is far younger than that. Furthermore, we know from Genesis 1 that God made the earth before He made the stars, but the big bang requires that many stars existed for billions of years before the earth did.

The evidence is far from conclusive, and the interpretation contradicts God’s Word. To call it proof of the big bang is inflating its importance.

Previous Article Cartoon: Let There Be Truth Next Article Adam Settles In at Bryan College