A Big Problem for the Big Bang

According to the big bang model, nuclear reactions in the first few minutes after the big bang produced the three lightest elements: hydrogen, helium, and lithium. Much later, stars produced all the other elements, including the carbon upon which all life is based, the nitrogen and oxygen in the air we breathe, the calcium in our bones, and the iron in our blood. Astronomers measure the amount of each element present in stars by observing dark absorption lines in their spectra. The average abundances of the lightest elements in certain stars supposedly reflect the primordial abundances of those elements produced by the big bang. Proponents of the big bang model claim that the match between observed abundances of the three lightest elements and the predications of their model prove the big bang. However, the predictions about lithium do not match the observations. Physicists and astronomers call this the primordial lithium problem.

While all atoms of the same element have equal numbers of protons in their nuclei, the nuclei of atoms of the same element can differ in the number of neutrons. We call these different kinds of atoms of the same elements isotopes. For instance, there are two kinds of hydrogen: normal hydrogen, with a single proton in its nucleus but no neutrons, and deuterium, which has a proton and a neutron in its nucleus. We call this other isotope of hydrogen deuterium, because the nucleus contains two particles; the name deuterium comes from the word for two. About one hydrogen atom in a thousand is deuterium. Actually, there is a third isotope of hydrogen, but it is unstable. This third isotope of hydrogen contains three particles in its nucleus: one proton and two neutrons. Because the nucleus of this isotope has three particles, we call this isotope tritium, from the word for three. Tritium’s instability causes it to decay into a stable isotope of helium. This radioactive decay has a half-life of about 12 years. There are some natural processes that produce tritium, but the production rate is very low, and since the half-life of tritium is relatively short, natural tritium is extremely rare in the world. 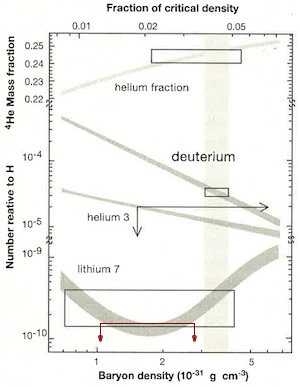 The baryon is a class of subatomic particles that includes the proton and neutron. The baryon density plotted on the lower horizontal scale is the number density of protons and neutrons in the universe today. The top horizontal axis is expressed as a fraction of the critical density, the critical density being the density required to produce a certain curvature in a cosmological model called a Friedmann universe. The vertical axis is the number density of the deuterium, the two isotopes of helium, and lithium-7 compared to normal hydrogen. The four shaded curves are the big bang model predictions for various baryon densities. The height of the boxes for helium-4, deuterium, and lithium-7 represent the range in the measurement of those isotopes. The widths of the boxes were drawn to enclose model predictions by the range in measured abundances. There is no lower limit to the helium-3 measurements, so it is enclosed by two arrows rather than a box. The shaded vertical band represents the range in measurements of the baryon density obtained by other means. The fact that the three boxes and the area bounded by the two arrows all enclose portions of the shaded vertical region is the great evidence of the big bang that Krauss claims. However, Krauss has not properly plotted the lithium-7 data, and he has not included lithium-6 at all. We have plotted in red the most recent upper limits to the measurement of lithium-7 abundance with arrows directed downward to indicate no lower limit, similar to the helium-3 plot. Note that the region bounded by the 2 arrows does not overlap with the measured baryon density, hence the data and predictions do not match. The lithium-6 abundance (not plotted here) is too high to fit the model predictions.

According to the big bang model, all six isotopes of the three lightest elements were produced in the early universe. Normally, the predictions of how much of each isotope produced by the big bang model are expressed in terms of the ratio of five of those isotopes (deuterium, helium-3, helium-4, lithium-6, and lithium-7) to normal hydrogen. The skeptic Lawrence Krauss is so confident of these claims that he says that he carries a card in his wallet to show to people who don’t believe in the big bang.1 That card shows a plot of the predicted abundance of four of the isotopes, along with boxes showing the measured ranges of the four isotopes (see image, right).2 Krauss says that he usually doesn’t get far enough into a discussion with a big-bang doubter, because data rarely impresses people who have decided in advance that something is wrong with the picture. Most people looking at the plot would not understand the plot anyway, so this is a great opportunity for Krauss to bamboozle and intimidate most of his critics. How well founded is the match between the data and predictions that Krauss claims? Not as good as he would have it.

Examining the plot, the theoretical and observed abundances for helium-4 and deuterium appear to match well. Krauss admits that the data for helium-3 are poor, with only upper limits on its abundance to compare with theory; one really cannot draw a conclusion from it. Finally, the lithium-7 plot  also appears to show good agreement between big bang theory and astronomical measurements. However, this is not correct, for the theoretical and observed lithium abundances do not match at all—the measured amount of lithium in the universe is at least three times lower than the prediction.3 Krauss has either used old data or improperly plotted it. This lithium problem has been known for some time. For instance, the year before Krauss’s book appeared, Fields published a review of the subject.4 Hence, Krauss’s claim that the theory and data match perfectly is not true.

While there is some agreement between big bang theoretical predictions and observations of the lighter elements, the predictions and measurements for lithium disagree greatly. Thus, the claims that observed light element abundances prove the big bang model are incorrect. However, don’t expect the scientific community to abandon the big bang model anytime soon. The big bang model has been the only widely accepted theory of the origin of the universe for a half century. Scientists do not abandon an idea willingly, and, of course, biblical creation is out of the question for most scientists.

Previous Article Does the Spotted Gar Harbor a Fish-Finger Connection? Next Article Review of The Lost Gospel by Simcha Jacobovici and Barrie Wilson