Most universities teach that stars formed from collapsing clouds of hydrogen gas billions of years ago and that stars continue to form today.

Most people are unaware that there are serious scientific problems with such notions. A careful examination of the evidence confirms that stars are not billions of years old. The properties of stars do not suggest an evolutionary origin; rather, they reveal the power and majesty of the Lord.

When we peer into a clear autumn night sky and see thousands of nuclear furnaces shining like tiny gems suspended in the expanse of heaven, we should be reminded that the universe is thousands—not billions—of years old, and was supernaturally created by Almighty God. As we examine the properties of stars, we will find that they are what we would expect from Scripture.

Let's begin by exploring some of the properties of stars and how these confirm biblical teachings. 1 Corinthians 15:41 states that one star differs from another star in glory. Although there are over one hundred billion stars in our galaxy, each one is unique. Even to the unaided eye, stars differ one from another in color and in brightness. 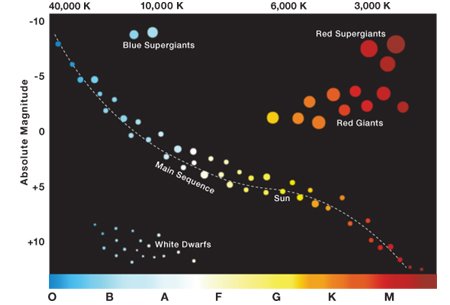 The Brightness and Color of Stars

The Hertzsprung-Russell diagram cross-indexes a star's magnitude (brightness) with its temperature.

Stars range in brightness as well as color. The intrinsic brightness (how bright a star really is) is determined by both the temperature and size of the star. Hot blue stars shine brighter than cool red stars of equal size. Big stars (“supergiants”) shine brighter than little stars (“dwarfs”) of equal temperature. This is because large stars have more surface area. The range of the intrinsic brightness of stars is incredible. The faint red dwarf star Proxima Centauri shines 20,000 times fainter than the sun, whereas the blue supergiant Deneb shines 200,000 times brighter!3

The apparent brightness of a star (how bright it looks in our night sky) depends on both its distance and its intrinsic brightness. So, the brightest stars we can see are either nearby or very bright intrinsically. Since over 99% of the stars we see in the night sky are intrinsically brighter than the sun, you might think that the sun is fainter than most other stars.4 But this isn't so. The vast majority of stars in the universe are actually fainter than the sun; in fact forty-seven of the fifty nearest stars are fainter.5 In our night sky, we see more of the rare, extremely bright stars simply because they are much easier to see than the faint ones.

Stars Were of Supernatural Origin

The properties of stars also confirm the biblical teaching that these objects were supernaturally created. Stars are made almost entirely of hydrogen and helium gas; these are the two lightest and most common elements. The combined mass from all this gas gives the star a gravitational field much stronger than earth's. This gravity prevents the gas from dispersing into space.

Despite claims to the contrary, we've never seen a star forming.

Secular astronomers believe that stars form spontaneously from the collapse of a nebula. A nebula is an enormous “cloud” of extremely low-density hydrogen and helium gas. If there were a way to compress such gas, then its own gravity would keep it together—a star would form. However, such compression would be very difficult to accomplish because gas has a tendency to expand, not contract. In fact, if a gas cloud were to begin to be compressed, it would drastically increase its pressure, magnetic field, and rotation speed.6 All of these factors would strongly resist any further compression. The compression of a nebula would be stopped long before any star could form.

Therefore, many creation scientists are convinced that stars cannot form spontaneously under normal circumstances. And despite claims to the contrary, we've never seen a star forming.7 Star formation seems to be nothing more than a secular attempt to explain the universe without invoking God. However, the Bible tells us that the stars did not form by themselves; God supernaturally created them on the fourth day of creation (Genesis 1:14-19).

Blue stars could last only a few million years at most; however, they are found in spiral galaxies thought to be billions of years old.

Stars also confirm that creation was relatively recent, not billions of years ago. Of all the stars, blue stars present the biggest challenge for those who believe in an old universe.8 They are the most luminous and massive type of star. Although they have more fuel available, they expend it much more quickly than their yellow or red counterparts. For this reason, blue stars cannot shine very long (by secular time scales).

Astronomers estimate that hot blue stars could last a few million years at most. Yet blue stars are found throughout the arms of virtually all spiral galaxies, such as ours, which secular astronomers postulate to be billions of years old. The commonness of blue stars verifies that they were supernaturally created in the recent past. These hot, luminous stars confirm that the universe is young—much younger than the 13.7 billion years assumed by the secular models.

The composition of stars also goes against the predictions of secular (evolutionary) origins scenarios. Though the main components of a star are hydrogen and helium, there are also trace amounts of heavier elements—called metals. (In astronomy, any element heavier than helium is called a “metal.”) Stars like the sun consist of only about 2% metals (the rest being hydrogen and helium); these stars are called “population I” stars and are found primarily in the disk of spiral galaxies. Some stars have even fewer metals, perhaps only one one-hundredth the amount found in the sun. These are called population II stars; they can be found in globular clusters and in elliptical galaxies.

According to the secular model, there should be a third class of stars—population III, which have essentially no metals at all.9 The reason is that the big bang is supposed to have produced only hydrogen and helium;10 the heavier elements, like carbon and oxygen, were supposedly produced in the central core of the first stars and dispersed into space when some of those stars exploded. Therefore, the first stars should have no heavy elements at all at their surface.11 Yet no population III stars have yet been discovered. It's a perplexing problem for those who hold to the big bang. But it's totally consistent with biblical creation.

The properties of stars confirm that biblical history is true. Stars differ in glory, just as the Bible teaches. Secular models of star formation are riddled with theoretical difficulties, and we have yet to see a star form spontaneously. Blue stars cannot last billions of years, yet they are common in spiral galaxies, confirming that these galaxies are young. Stars are a heavenly reminder that the universe was supernaturally created, just as the Bible declares!