Strolling along the Dresser Formation in Western Australia, geobiologist Nora Noffke noticed that ancient Archean rocks were tattooed with familiar markings. The marks were identical to those made by mats of modern microbes as they interact with sediment that accumulates on top of them. Noffke is an expert on such microbially induced sedimentary structures (MISS). Her subsequent study, published in the journal Astrobiology, has implications for the origin of life on earth and for the search for life on Mars.

“We were just there as geo-tourists,” says Noffke, an associate professor at Virginia’s Old Dominion University. “I saw these rocks with the familiar wrinkle marks.” Noffke has seen MISS just like these in other ancient rocks and also in modern sedimentary rocks, but the location of the MISS in the Dresser Formation carries the oldest conventional date of any MISS site—3.48 billion years. “People didn't see them because they didn't know what to look for,” she says. The Dresser Formation has the distinction of being one of the few places on earth where Archean rock undistorted by tectonic disturbances is exposed. Rock layers of the Dresser Formation also feature stromatolites and microfossils, which are likewise footprints of ancient microbial life.

Mat-building microbes may well have flourished in the waters of the pre-Flood world.

The cell structures of the microbes themselves are not preserved in MISS. Instead, MISS are “large scale structures that the microbes constructed before they died,” explains coauthor David Wacey of the University of Western Australia. “We see tufts and wrinkles and—when we look down the microscope—we see filaments tangled in sand grains. We are also seeing organic material which are the actual microbes but they are decomposed to the point that we cannot see an actual cell. You just see a mass of carbon-rich material.”1 Still, these are “possibly the oldest signs of life on Earth,” Wacey says.

“There was plenty of life from the 3.4 and 3.43 billion-year-old mark—this is pushing it further back. There are slightly older claims of life in rocks in Greenland—but the rocks there have been so deformed that it is very difficult to tell if what you are seeing was actually there in the first place. With these microbial systems in the Pilbara, you can see these things in the field and under the microscope. You can see how the bacteria were interacting with the sediment they were living on.”2

Like MISS in the South African Moodies Group, dated 300 million years younger at 3.2 billion years, the MISS in Western Australia’s Pilbara—despite their purported antiquity—are identical to modern ones. Some microbes called cyanobacteria live together, forming a slimy mat on marine surfaces. MISS are formed by the orderly interaction of such cyanobacterial mats with sediment that gets deposited on them. MISS range from centimeters to kilometers in size and are found in lakes, rivers, tidal flats, and shallow marine environments all over the world. These ancient Archean MISS were found in a supposed sabkha environment—a crusty flat area from which seawater appears to have evaporated. These ancient MISS are identical in appearance to modern ones.

Similar apparent environments appear to exist on Mars. Therefore, the researchers note, “Microbially induced sedimentary structures are listed as one target for the Mars Exploration Rover Program,”3 as their existence would lend support to the possibility that life once existed on Mars. If they exist on Mars, Wacey says, “These microbial mats could be seen by a Mars rover. It also helps with our understanding of when life first evolved and what sort of environment it evolved in and putting firm dates on when some pretty important things happened. Ultimately, we are looking for when that soup of chemicals became something that could be called life.”4 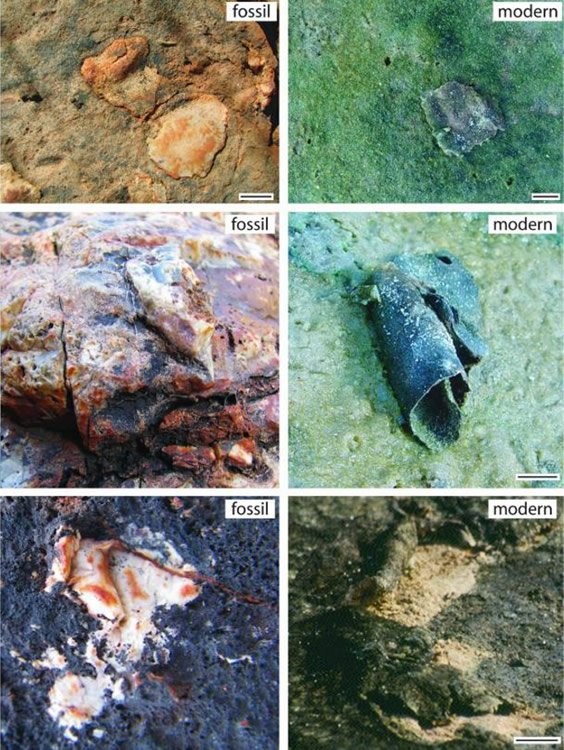 Numerous characteristics—both microscopic and those easily visible to the naked eye (like these)—demonstrate that modern microbially-induced sediment structures (MISS) are structurally identical to fossilized ones. The fossilized MISS here are from Western Australia’s Dresser Formation and are assigned an age of 3.48 billion years. The top example shows flat microbial mat chips. The second pair of photos are of a MISS fragment rolled up, likely by the forces of a current or by dessication. The third pair of photos shows the way erosion bends layers of MISS upward. Image: “The Oldest Signs of Life on Earth” in Astrobiology Magazine.

Cyanobacteria—the sort of bacteria primarily associated with modern MISS—perform photosynthesis and therefore need sunlight exposure to survive. The interaction between cyanobacteria and accumulating sediment keeps the bacteria in optimal positions to access available light. As sediment drops onto microbial mats, the bacteria respond by interweaving filaments between the grains of sediment, increasing the sediment’s resistance to being swept away by currents. Then the microbes form a layer of filaments along the sediment surface, further baffling currents and stabilizing the accumulating sediment. The microbes then arrange themselves to take optimal advantage of the available light for photosynthesis. Finally the entire structure of sediment and optimally arranged microbes in the mat is rapidly mineralized.5 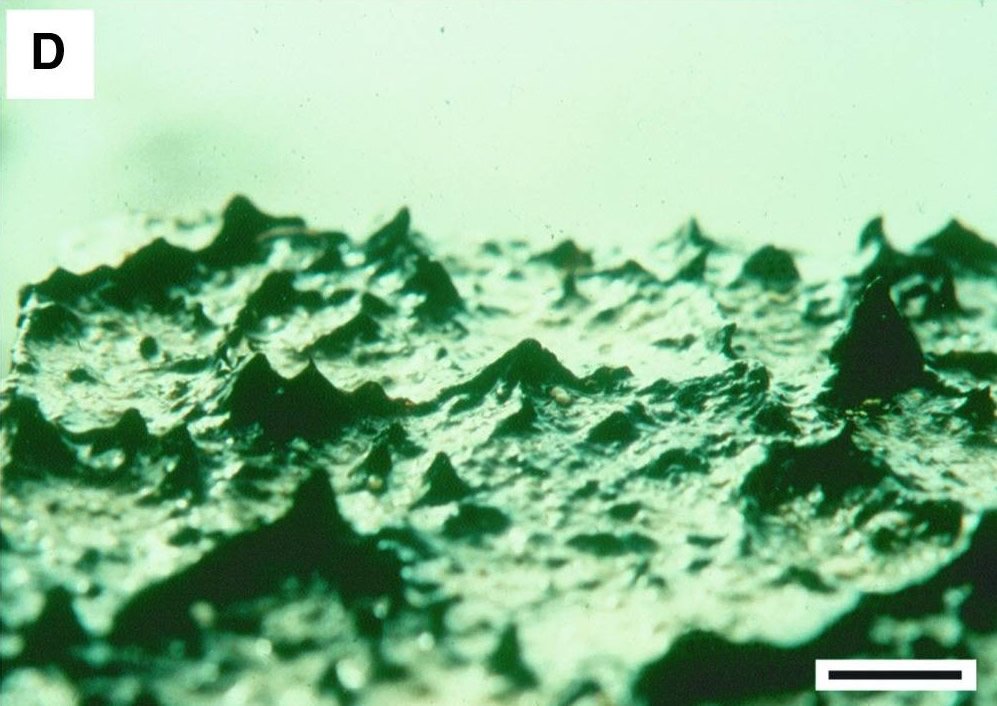 These are tufts and ridges on a modern microbial mat integrated with sediment found in Tunisia’s Sabkha Bahar Alouane. They form as filamentous cyanobacteria, apparently coordinated by cell-to-cell communication, move along each other in an upward direction which maximizes their exposure to light needed for photosynthesis. Scale bar=0.5 cm. Image by Nora Noffke et al., via Astrobiology.6

Stromatolites are similar to MISS in that they form through microbial interaction with sediment, but stromatolites incorporate precipitated calcium carbonate as they mineralize. Stromatolites therefore form domes and columns, but MISS remain flat. Modern stromatolites can be similar to ancient ones in appearance but are not identical. However, Noffke says, “The MISS of the Dresser Formation look identical to their modern counterparts. I was really astonished by how similar they are. But it also raised the question: why are they so identical? And what does that mean about the organisms that created them?”

Noffke infers the characteristics of ancient MISS from modern ones. “Modern microbial mats can serve as an analog model for the interpretation of ancient ones,” she says. The complex processes known to be involved in the formation of modern MISS must have also formed the ancient ones. And since modern MISS are predominantly associated with cyanobacteria, the evolutionary interpretation of these modern-appearing Archean MISS is that cyanobacteria had already evolved and attained their present level of complexity 3.5 billion years ago.

These tufted microstructures reflect the tufts and ridges seen in the macrostructure of this fossilized MISS in the Dresser Formation. At both the macroscopic and the microscopic level, they are identical to modern MISS such as the above example from Tunisia. Image by Nora Noffke, via Astrobiology.8

“Complex mat-forming microbial communities likely existed almost 3.5 billion years ago,” Noffke says. “The structures give a very clear signal on what the ancient conditions were, and what the bacteria composing the biofilms were able to do.”10 Yet for complex microbial life to have evolved by 3.48 billion years ago, molecules-to-man evolution would have had to have gotten a large head start on an earth with environmental conditions able to, like those in the modern world, support life. 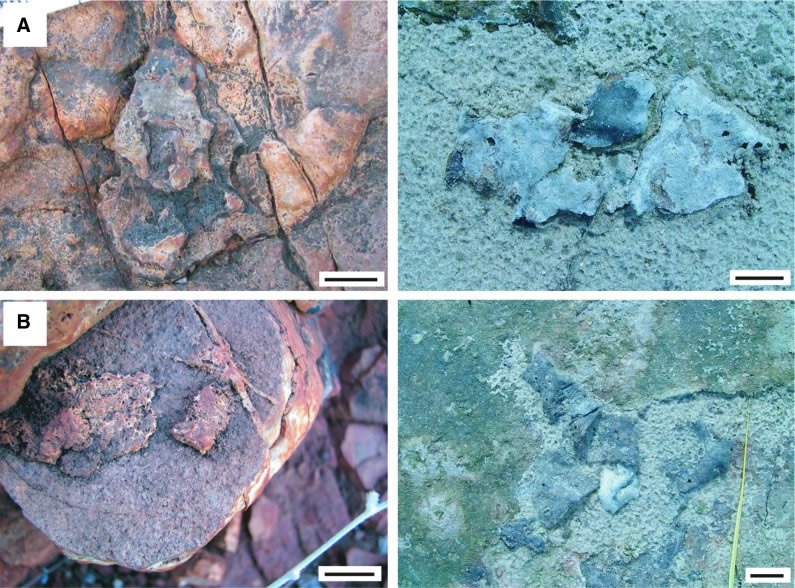 These Dresser Formation fossils (left) and modern equivalents (right) provided another example of identical MISS formations in the modern world and the Archean fossil record. The modern examples from Portsmouth Island, USA, are microbial mat chips—bits of MISS that have been broken off and deposited in individually and in piles. The Archean fossil record suggests the same things were happening to equivalent MISS when they were fossilized. Scale bars=1 cm. Image by Nora Noffke et al., via Astrobiology.11

What, indeed, does the fact that modern MISS are identical to those assigned an age of nearly 3.5 billion years mean? Answers in Genesis geologist Dr. Andrew Snelling, commenting on the study and the accompanying photographs comparing fossilized and modern MISS, says:

The photos of the ancient fossilized structures in sandstone side-by-side with photos of the modern structures in sands microbially produced by microbial (slime) mats on sand surfaces in shallow water say it all. Nothing has changed in the claimed 3.5 billion years between the ancient and the modern. The microbes have stayed the same, reproducing after their kind and doing the same mat building and affecting the sand sediment surfaces the same way.

So much for the alleged 3.5 billion years between them. They haven’t evolved into new creatures, or even into new microbes doing different things. These occurrences can be better explained as continuity between the pre-Flood (ancient) microbial mats on sand surfaces in the shallow waters off the coast of the pre-Flood supercontinent, likely fossilized even during the latter half of the Creation week only 6,000 or so years ago, compared to their modern counterparts which have survived through the global Flood cataclysm of Noah’s day.

The deepest of such fossils testifying to the existence of earth’s most ancient microbial life likely formed in the comparatively quiescent waters of the pre-Flood world, even as early as the week of Creation. Mat-building microbes may well have flourished in the waters of the pre-Flood world. The cataclysmic upheavals of the global Flood would have disrupted most of these structures, however, along with their natural habitats. In any case, the 3.5 billion year date is assigned to these rock layers on the basis of worldview-based unverifiable interpretations of radiometric dating methods, not on the basis of any characteristics of the MISS themselves.

Evolutionary scientists paint a picture of the early earth as a desolate inhospitable place where photosynthesizing bacteria had to produce enough oxygen to build a life-supporting atmosphere before evolution could continue to progress. These Archean MISS create a bit of an evolutionary conundrum in that they would have had to evolve with amazing rapidity and then ceased evolving to remain unchanged for 3.5 billion years. Our Creator’s eyewitness account of earth’s origins recorded in Genesis, however, describes a world in which He made the dry land and plants appear on the 3rd day and all the kinds of animals just 2 to 3 days later. Archean MISS are quite consistent with a biblical worldview that accepts the eyewitness testimony of our Creator as to earth’s origins.

Previous Article What Makes Us Human? Next Article Eyes on Comet ISON’s Fiery Fate but Not Oort Origins