A trail of tiny tracks in Uruguay’s Tacuarí Formation has evolutionary pundits scratching their heads to sort out the rate of evolution of early complex life-forms. University of Alberta geologists Ernesto Pecoits and Natalie Aubet have traced the trails left by a miniscule slug-like creature back to a time before such bilaterally symmetrical creatures should have been crawling around. 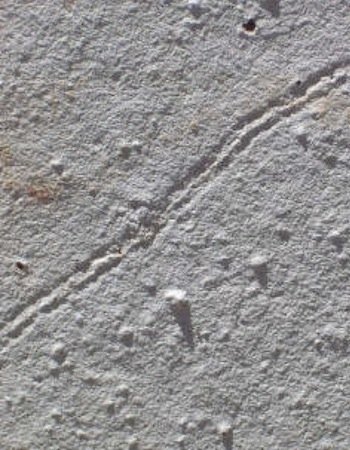 The tracks, which are about 2 centimeters (0.8 inches) long, suggest the creature that made them was only about 4–7 millimeters (0.2–0.3 inches) long and 1–2 millimeters (0.04–0.08 inches) wide. It’s not the size but the shape that has attracted attention. The complex creature that made the tracks appears a little too early for the conventional evolutionary interpretation of the fossil record.

According to Science, the journal in which the report appears, “Direct fossil evidence of animals from Ediacaran period—the time in Earth’s history just before extensive animal diversification in the Cambrian—is scant. However, the remains of animal activity in sediment, which remain intact through geologic time can provide clues about animal behavior and evolution. . . . The complex morphologies of the fossil burrows suggest that these animals actively grazed and had the ability to burrow deep within sediments.”1

The nature of the tracks suggests their maker was bilaterally symmetrical—with “a front and back as well as a top and bottom, unlike corals and sponges.” As explained in a “Perspectives” article—“Old and Groovy”—in the same issue of Science, “Evidence of sediment furrowing over extended distances has been widely accepted as evidence of bilaterian life: Flatworms may glide along a surface and deep-sea protists can produce short furrowed surface traces, but making a long furrowed trace fossil with evidence of backfill requires a bilaterian body plan.”2

Pecoits says they discovered the tracks in 2007, “But at that point we didn't realize the importance of this discovery, because we didn't know the age of these rocks.”

Pecoits says they discovered the tracks in 2007, “But at that point we didn't realize the importance of this discovery, because we didn't know the age of these rocks.” Body fossils and tracks of such “advanced multicellular life-forms” with bilateral symmetry have previously been dated as early as 555 million years ago. Uranium-lead dating of zircons in granite intrusions within the sedimentary rock near the tracks (within about 5 meters)3 push the date for the evolution of bilateral symmetry back to at least 585 million years ago, according to evolutionary interpretations. Such a date encroaches uncomfortably close to the conventionally accepted date of 635 million years for the evolutionary emergence of simpler life-forms such as sea sponges.

As the authors of “Old and Groovy” explain, “The principal argument in their paper . . . is at odds with previous suggestions that bilaterian traces first appear at the same time as putative bilaterian body fossils of motile organisms. It is unlikely that the bilaterian record pre-dates that of organisms like sponges and soft corals.”4

Pecoits team writes, “Therefore, it appears as though a maximum interval of 50 My exists between the earliest definitive evidence of sponges and the bilaterians found in the Tacuarí Formation, which implies that early animal evolution took place on a geologically rapid time scale once environmental conditions proved favorable for higher forms of life to colonize the ocean realm.”5 The researchers expect their findings to be met by skepticism because evolutionary thinking presupposes the simpler organisms would have required much longer to evolve into complex bilaterally symmetrical mobile ones.

From a biblical perspective, however, the findings make sense. The vast ages obtained from the radiometric dating methods are interpretations based on unverifiable assumptions. (See Radiometric Dating: Back to Basics, Radiometric Dating: Problems with the Assumptions, and Radiometric Dating: Making Sense of the Patterns to learn more.) God created all kinds of living things—both simple and complex—about 6,000 years ago. The fossil record preserves a record of the order in which many creatures were buried—many of them during the global Flood—not the record of their evolutionary emergence. The fossil record preserves many distinct kinds of organisms, but it does not demonstrate evolution of simple kinds of organisms into more complex ones. Thus, the presence of preserved tracks in rock dated inconveniently early for evolutionists is no problem for creationists as those tracks are simply a remarkably preserved record of the fact these creatures lived, not of their evolutionary emergence on earth’s evolutionary tree of life.