The History Channel’s Bible Secrets Revealed reveals more about the rebellious heart of man than the Word of God.

The History Channel’s Bible Secrets Revealed: Lost in Translation—the first episode of a new series—admits the Bible is the most influential book ever written but misrepresents the reason. The program asserts the Bible was cobbled together by anonymous people with no firsthand knowledge of what they reported, mistranslated, and misinterpreted in order to serve the purposes of the powerful, get money from the rich,1 and satisfy the desire of men “to live in moral clarity and peace.” 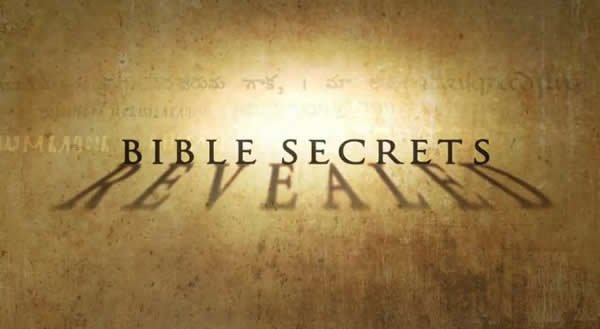 The History Channel’s Bible Secrets Revealed: Lost in Translation is the first episode in a new series capitalizing on the popularity of programs about the Bible. It promises to challenge “all that we thought we knew” about the Bible.

How Do We Handle Questions About the Bible?

When we read and compare in context all the related accounts in the Bible and recognize that the entire Bible is the product of one inerrant divine Author, apparent “contradictions” are resolved.

There is nothing wrong with asking questions and examining evidence. Luke even referred to the “many infallible proofs” (Acts 1:3) of the Resurrection of Jesus Christ. Scripture-affirming evidence comes from many sources—historical, scientific, archaeological, theological, and from the testimony of Jesus Christ Himself. This ministry—Answers in Genesis—exists to help people find these answers in and about God’s Word.

Who Wrote the Bible?

God uses His Word to lead many people to saving faith in Him (Romans 10:17). But nothing about the History Channel program encourages an approach to the Bible that permits considering it the inerrant Word of God who cannot lie (Titus 1:2). Instead, the narrative is cleverly arranged to grant the Bible the dignity of being the most influential book ever written while portraying it as a fabricated compilation of flawed accounts, fictionalized stories with a noble purpose, conveniently imprecise translations, and politically motivated lies.

The Apostle Paul wrote of people who would rather have their “itching ears” satisfied with fables than to hear truth (2 Timothy 4:3–4). In fact, speaking to an audience of Greeks and foreigners on Mars Hill in Athens, he observed that his audience was very religious (Acts 17:22–34) and particularly liked to hear some new thing (Acts 17:21). The History Channel program planners recognize that people haven’t changed much. Therefore, they promise to reveal the Bible’s secrets, to challenge everything “we thought we knew,” and to put us on the trail of “treasures” that could undermine biblical teaching.

The Dead Sea Scrolls, for instance, are wrongly held up in the program as proof that the Bible is full of discrepancies. The narrator then suggests that parts have been stolen and might harbor secrets we need in order to know the whole truth about the Bible. In reality, the Dead Sea scrolls2—portions of the Old Testament Scriptures belonging to the Jewish Essene sect, some copied a century before Christ’s birth—are a testimony to the accuracy of the preservation of the Old Testament Scriptures. Certainly nothing about the Dead Sea Scrolls hints that sinister forces have absconded with the parts that could somehow bring down the Old Testament. The inference in Bible Secrets Revealed: Lost in Translation would qualify as the plot of a poorly written novel and seems to serve as a cheap bit of textual titillation for “itching ears.”

Charges of Fraud and Forgery

Bible Secrets Revealed: Lost in Translation intersperses narration with snippets of interviews with scholars portraying people who accept the Bible as God’s inerrant Word as uneducated and behind the times. All of the men moved by God to pen His Word (2 Peter 1:21) are described in the program as “forgers” who lied about the authorship of their material, attributing it to fictional or long-dead people. The program indicates these liars are euphemistically called “pseudepigraphers” because they produced their forgeries for a holy cause. Christian scholars allegedly call these pseudepigrapha (writings falsely attributed to another author) instead of forgeries “because nobody knows what pseudepigrapha means.” Nevermind the fact that the early church soundly rejected actual pseudepigraphal works.

Viewers are told, for instance, that Mosaic authorship of the first five books of the Bible is now “questioned by most scholars.” Jesus Christ, however, affirmed Mosaic authorship of the Pentateuch. He told Jewish scholars who rejected Him, “‘Do not think that I shall accuse you to the Father; there is one who accuses you—Moses, in whom you trust. For if you believed Moses, you would believe Me; for he wrote about Me. But if you do not believe his writings, how will you believe My words?’” (John 5:45–47).

The program’s assertion that the writers could not have ever met Jesus or had firsthand knowledge of His ministry is groundless.

The program declares that the four Gospels, traditionally considered first-hand accounts of the life of Jesus, are not. Scholars now know, the Bible Secrets “experts” assure us, that the bulk of what the Gospels report never even happened. They declare authoritatively that none of the Gospel authors ever met Jesus. The closest thing to a justification for this bold declaration is the assertion that, because the first Gospel to be written down was Mark’s Gospel around AD 70, the Gospel writers couldn’t have been recording first-hand accounts. However, Jesus Christ was crucified around AD 30. John’s Gospel, the last to be written, was completed along with the other books penned by John before he died of old age in AD 98 in Ephesus.3 Thus the program’s assertion that the writers could not have ever met Jesus or had firsthand knowledge of His ministry is groundless.

Not surprisingly, the History Channel program presents the virgin birth of Jesus Christ as a fiction based on a mistranslation. One “expert” equates the biblical virgin birth with Greco-Roman mythology that spun fantastical tales everyone knew were false in order to communicate higher truths. The Scriptural support for the virgin birth does not, however, rest solely on a single translation of an Old Testament word into New Testament Greek. Furthermore, comparing the character and claims of the holy God to the perversity of the Olympian gods and goddesses is absurd.

In dealing with the Creation history in Genesis, the program’s “expert” dismisses it by declaring that no one was present at Creation and that therefore the Genesis account cannot be an eyewitness account. He thus disregards God the Creator who was the only eyewitness. As the real Author of the Bible, God is qualified to provide an eyewitness account of His creation of all things, including the first man and woman, Adam and Eve.

Another History Channel “expert” disputes idea that God created a historical Adam and Eve. “Adam,” he says, only refers to the human race, and he claims that mistranslation of Genesis 1:27 misled people. Clearly, however, the opening chapters of Genesis only make sense when understood as an account of what God said and did in dealing with a man and a woman, not a population. Furthermore, Jesus Christ referred to Adam and Eve as two real people (Matthew 19:3–6; Mark 10:3–9).

Bible Secrets Revealed: Lost in Translation also contains a thinly veiled attack on the Resurrection of Jesus Christ. Because some manuscript copies of Mark’s Gospel, though clearly stating “He is Risen!” (Mark 16:6), are missing the accounts of Christ’s post-Resurrection appearances recorded in Mark 16:9–20, the program suggests that someone just made up a more satisfying ending and thus created a sort of resurrection mythology. Yet the fact that Jesus Christ was alive after being crucified, dead, and buried could not be suppressed by the bribes of Jewish leaders (Matthew 28:11–15). “Many infallible proofs” (Acts 1:3) do attest to the bodily Resurrection of Jesus Christ.

Christ’s Resurrection testified to His divinity (Romans 1:4), and that unconquerable message ultimately turned the world “upside down” (Acts 17:6). Jesus Christ is a historical figure who Himself attested to the truth of the Old Testament, including the historical account of Creation as recorded in Genesis. He is the Son of God and the Savior to whom the Scripture points.

In addition to its continuous assault on Scripture, the program makes several basic claims about history that are simply false. For example, Constantine did not make Christianity the official religion of the Roman Empire as stated in the program. Emperor Theodosius did this in AD 380. What Constantine did was end the official persecution of Christianity with the Edict of Milan in 313.

The fundamental problem the “experts” in Bible Secrets Revealed: Lost in Translation have with the Bible—as these examples illustrate—is not so much with trusting its content as with trusting its Author—God Himself. Since Satan—speaking through the serpent—asked Eve “Hath God said?” (Genesis 3:1–5), many people have willfully rejected (Romans 1:18–23; 2 Peter 3:5) God’s Word—its history, its convicting message, and the Savior to whom it points from beginning to end. Nevertheless, the message of Jesus Christ continues to turn the world upside down as demonstrated by the History Channel’s ongoing promotion of unbelieving scholars who spend so much time attempting to undermine the gospel.

“All Scripture is given by inspiration of God, and is profitable for doctrine, for reproof, for correction, for instruction in righteousness” (2 Timothy 3:16). The biblical message of Christ is an offer of unmerited grace and hope for people steeped in sinful rebellion against God, doomed not only to eternity in hell but to an earthly life estranged from a personal knowledge of their Creator’s love. But many people reject the knowledge that every one of us is guilty of sin, accountable to God, incapable of saving ourselves, and in need of the grace provided by Jesus Christ. Naturally, many who proudly reject God’s message in Scripture and the Savior to whom Scripture points approach God’s Word with extreme skepticism, simply assuming that it must all be fabricated. After all, if the Bible is really reliable, then those who reject its truth are not only wrong in their scholarly opinions but also commanded by Scripture to repent, trust the Savior presented by the Bible, and take God at His Word.

Previous Article Did Snakes Shape Our Brains? Next Article Did Archaeopteryx Evolve Flight and Then Get Grounded?