Freedom Under Fire: Your Chance to Speak Up

The threatened deportation of a German family, now living under asylum in the United States, has brought to light a disturbing threat.

The threatened deportation of a German family, now living under asylum in the United States, has brought to light a disturbing threat, not only to their freedom and that of other would-be immigrants, but to the freedom of all Americans. We first reported their plight in February.1 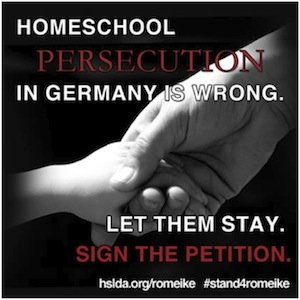 At least 100,000 signatures (from people 13 or older) are needed by April 18 to send the White House a message2 that Americans are concerned about keeping the United States a refuge of freedom. By asking that this German family currently under asylum in the United States be allowed to remain here, we are actually taking a stand to protect freedom for all. Image from www.hslda.org 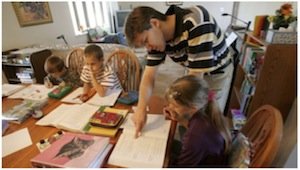 Initially granted asylum in 2008, the Romeike family is now threatened with deportation to Germany. The U.S. government’s case against the family raises questions that should concern all Americans. Image credit: Wade Payne/EPA through abcnews.go.com 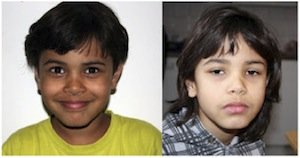 Is this the face of the future of freedom? In 2009, Domenic Johansson’s photo (left) was snapped for his passport as his family prepared to emigrate from Sweden to India, fleeing persecution for homeschooling. At the time, homeschooling in Sweden was legal. The photo on the right was taken four months after Domenic was forcibly taken from his parents as a result of their decision. He has not been returned to them. You may read more about the current status of Domenic and his family at www.hslda.org. Image: friendsofdomenic.blogspot.com

U.S. law grants permanent political asylum if refugees can show they have been persecuted for religious reasons or for being part of a “particular social group.” The Romeike family was granted asylum by a federal judge in 2008, but the U.S. Immigration and Customs Enforcement has appealed the ruling. The U.S. Attorney General’s case against the family should raise red flags for every American.

Americans concerned about protecting everyone’s religious freedom now have an opportunity to speak up. If at least 100,000 e-sign a petition to the White House by April 18, then the Obama administration will need to acknowledge our concern about protecting our own fundamental freedoms and keeping the United States the safe refuge for religious freedom that it has historically been. If you value your freedom to raise your children as you choose, or even just your own freedom to think and believe as you will, then you need to be aware of the U.S. government’s contentions in this case and make your voice heard.

The United States of America has long been a destination for those seeking freedom from religious persecution. The threat of martyrdom—that most horrible violation of human rights—persists in many nations today.4 But in “free” nations religious persecution can take other forms.

The United States Supreme Court has affirmed that religious freedom includes the right of parents to direct the education and religious upbringing of their children.5

The United Nations Universal Declaration of Human Rights (Article 26, section 3) also affirms, “Parents have a prior right to choose the kind of education that shall be given to their children.”6

The Bible makes it clear that parents are responsible to diligently teach their children God’s truth (Deuteronomy 6:5–9; Malachi 2:15; Proverbs 22:6; Ephesians 6:4). And the conscience of many parents here and around the world dictates they can best raise their children by educating them at home.

Yet in some countries, even free nations like Germany and Sweden, parents face fines, jail, and loss of child custody for exercising this fundamental human right. Despite the harsh lessons of history—the terrible suffering under the Nazi and East German totalitarian regimes that considered children’s philosophical training to be under the purview of the state—homeschooling has remained illegal in Germany since 1918. In 2008, the Romeike family finally fled from Germany. The Johansson family in Sweden—where homeschooling was at the time legal—was not so fortunate: though they had violated no existing laws, their child Domenic was forcibly removed from their custody on June 25, 2009, after they had boarded a flight to leave Sweden for his mother’s homeland. He has not been returned.7

“Any nation that severely restricts the ability of parents to choose alternative forms of education, including home education, in the name of creating national unity,” as Sweden and Germany do, HSLDA’s Michael Farris says, “cannot call itself a free nation. Freedom necessarily requires the individual to have the liberty to think differently and believe differently than programs instituted by the current rulers of any nation. Educational freedom is the cornerstone for all freedom of thought and conscience.”8 Michael Farris is the founder and chairman of the Home School Legal Defense Association (HSLDA). He will be arguing the Romeike’s case before the U.S. 6th U.S. Circuit Court of Appeals on April 23.

Freedom necessarily requires the individual to have the liberty to think differently and believe differently than programs instituted by the current rulers of any nation.

The freedom to homeschool is protected in the United States—so far. But in making its case against the Romeike family the United States Attorney General’s office has made remarks threatening American rights, not only to homeschool, but to believe anything the government finds objectionable.

“We should understand that in these arguments, something very concerning is being said about the liberties of all Americans,” says Farris. In standing up for the rights of the Romeikes, he explains, “We stand up for our own.”9

Remember the immortal words of German pastor Martin Niemöller in his “First they came for …” speech. We as American citizens have a chance—until April 18—to petition the White House (and, through it, the U.S. Attorney General’s office) to protect the fundamental freedoms of Americans, the freedoms we believe are human rights that should be accorded to people all over the world. If we fail to speak out, the day may come when Niemöller’s final line applies to us: “Then they came for me, and there was no one left to speak for me.”10

Previous Article How Do Leafhopper Legs Survive the Launch? Next Article Should Abortion Providers Be Required to Save Infants?