Did This University Pass the Test?

Throughout its 24-year history, Answers in Genesis has come under attack from a variety of people for holding Bible-based beliefs. Recently, AiG was targeted in a free speech, religious liberty matter at one of America’s universities.

Earlier this year, Ken Ham, AiG president, was scheduled to give a talk on the ideas of Charles Darwin at the University of Central Oklahoma, with 17,000 students at its Edmond campus. However, after strong objections from LGBTQ activists at the university, the student body president cancelled the talk (despite a speaking invitation that originally came from the student government). As the national media followed the talk’s cancellation, reporters noted the irony that the lecture was scheduled to be held in Constitution Hall, and they pointed out that activists had successfully stifled free speech contrary to the US Constitution’s guarantee of freedom of expression.

After state legislators, several UCO alumni, local pastors, writers of letters to the editor, and other Oklahomans stood up for the First Amendment’s promise of freedom of speech and the free exercise of religious expression, UCO President Don Betz intervened and invited Ham to speak as planned. The talk took place this afternoon. 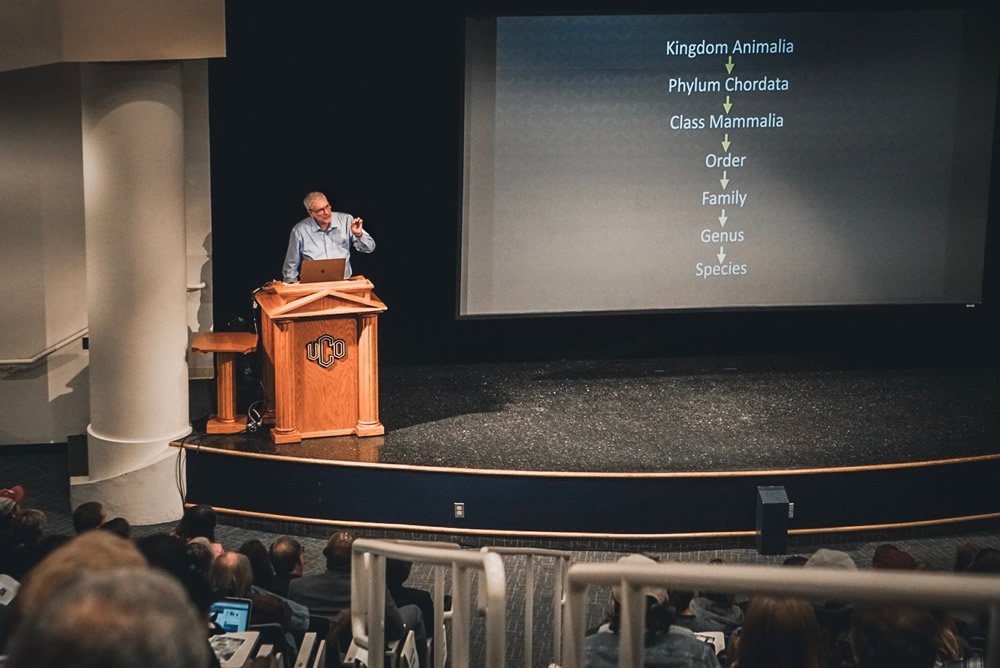 Ken Ham spoke today in front of a large crowd at the University of Central Oklahoma.

Various fields of science confirm the Bible’s record of earth history, starting with Genesis chapter one.

Ham’s presentation in Constitution Hall (and watched by others via closed circuit in an overflow room) was not disrupted. During his lecture, “Genesis, Science, and the Culture,” Ham brought up some of the key points that he presented during his two famous evolution/creation debates with Bill Nye “the Science Guy” that occurred over the past four years (in 2014 and 2016). He emphasized the two different worldviews and their respective starting points when interpreting scientific evidence. Ham also acknowledged the limitations of science when it comes to studying the unobservable past as it relates to the evolution/creation question. At the same time, Ham indicated that various fields of science confirm the Bible’s record of earth history, starting with Genesis chapter one. In his talk, Ham also discussed how social issues of our day relate to Genesis, including the biblical basis for marriage: one man, one woman, for life.

Dr. Georgia Purdom of AiG, who holds a PhD in molecular genetics, followed with her presentation, “Genetics and the Bible.” During the Q&A session, she and Ham answered questions about the preservation of soft tissue in dinosaur bones, the origin of “races,” dog evolution, and more. We imagine this was the first time UCO students and faculty had been exposed to Darwin-questioning ideas on their campus. 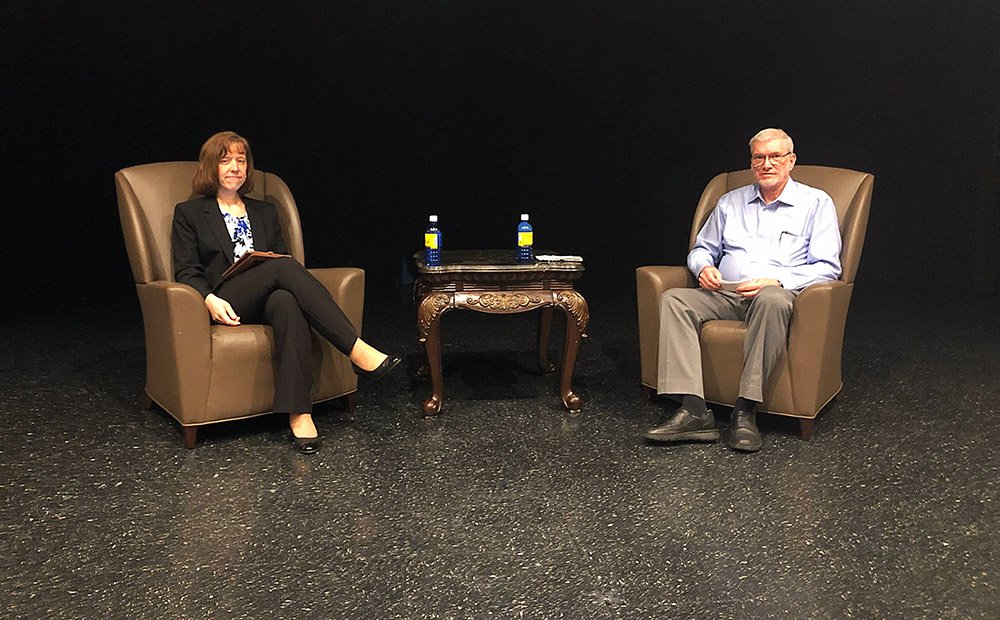 Dr. Georgia Purdom (PhD, molecular genetics) also spoke at UCO today. Here she is with Ken Ham, getting ready for the Q&A session.

UCO President Don Betz has scheduled other events this week for UCO students and faculty that relate to Ham’s talk and its initial cancellation. This morning, before the lectures by Ham and Purdom, a public forum was held on campus to discuss the importance of preserving free speech at colleges. Ham observed, “I’m happy to hear that UCO is openly discussing the importance of preserving freedom of expression and First Amendment rights on its campus. UCO certainly does not want to be seen as intolerant and become another U.C. Berkeley.”

Ham continued, “I have spoken at a few state-funded universities ranging from Idaho to Ohio, as well as private schools like Harvard in Massachusetts—and at countless Christian universities. I had never encountered any real opposition on a college campus until this incident, and it occurred in the Bible Belt of all places. But I’m thankful to God that through the efforts of countless Oklahomans, the talk was reinstated.”

Ham was interviewed by several media today about the UCO event, including by two TV crews who talked to Ham before the lecture. 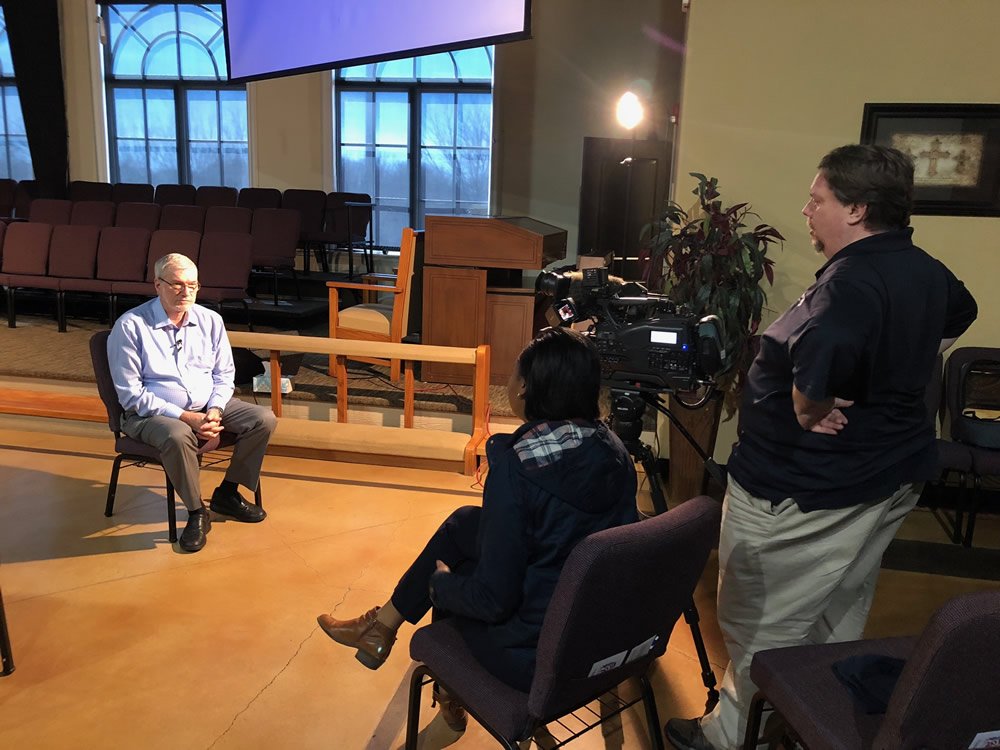 Ken Ham being interviewed earlier in the day by Channel 5, the ABC-TV affiliate in Oklahoma City.

In the aftermath of this free-speech battle in Oklahoma, AiG hopes an example has been set for other state-supported institutions to ensure free speech on their campuses. After all, when America’s founders assembled a Bill of Rights for their new nation, what were the first rights accorded its people? Freedom of religion and freedom of speech (in that order). In that First Amendment, the government specifically pledged that it would not restrict the “free exercise” of religion. Thankfully, as the country watched, the University of Central Oklahoma passed the test—at least this afternoon.

Pray for America’s leaders in academia—national, state, and local. We are commanded to pray for all leaders (1 Timothy 2:1), and that would include those employed at universities as they consider policies that will either help or undermine academic freedom.