Free speech and the free exercise of religion (more specifically, the free exercise of Christianity) are under attack throughout the West. Often this attack takes place where free speech and the free exchange of ideas are supposed to be supported and praised—public university campuses. Yet another squashing of free speech took place at the University of Central Oklahoma recently when my contract to speak on March 5 was torn up because the LGBT group on campus complained about me coming. 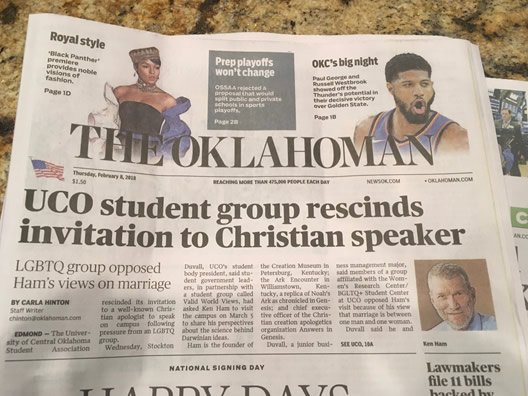 In an article in The Oklahoman (Oklahoma’s largest secular newspaper) we read,

Duvall [UCO’s student body president], a junior business management major, said members of a group affiliated with the Women’s Research Center/BGLTQ+ Student Center at UCO opposed Ham's visit because of his view that marriage is between one man and one woman.

I want to be very clear on this, there have been members of our campus who have tried to bully me in my decision. While none of these examples have involved members of the administration, there is definitely something that must be done to address this issue. I am not the first person to be personally attacked by a very vocal group on campus that has little tolerance for opposing views.

Yet the school has sponsored and given university funding toward a Drag Queen show, and this tenured professor also sponsors a “Safe Sex Carnival,” which includes explicit, so-called learning games (that as a Christian I would describe as sexually perverse). Apparently, these events are acceptable on campus, but having a Christian come and speak is not.

As I stated in an article on our website, religious liberty in America is under increasing attack by some very intolerant people. Our constitutional right to free speech and the free exercise of religion, guaranteed under the First Amendment, have been denied with the school’s cancellation. After a small but vocal group on campus put up a fuss about my talk, the university’s student association caved, breaking the contract we agreed on and contradicting university policies of promoting “free inquiry” and “inclusiveness” on campus. Apparently, free speech at UCO is protected only if it is the “right kind” of speech.

So what can we do?

I discussed this item on Answers News this afternoon with hosts Dr. Georgia Purdom and Bodie Hodge. Answers News is our twice-weekly news program, filmed live before a studio audience here at the Creation Museum and broadcast over my Facebook page. We also discussed the following topics:

Be sure to join us each Monday and Thursday at 2 p.m. on my Facebook page for Answers News. You won’t want to miss this unique news program that gives science and culture news from a distinctly biblical and Christian perspective.