Note: This article is slightly adapted from a news release being sent to the national media today. 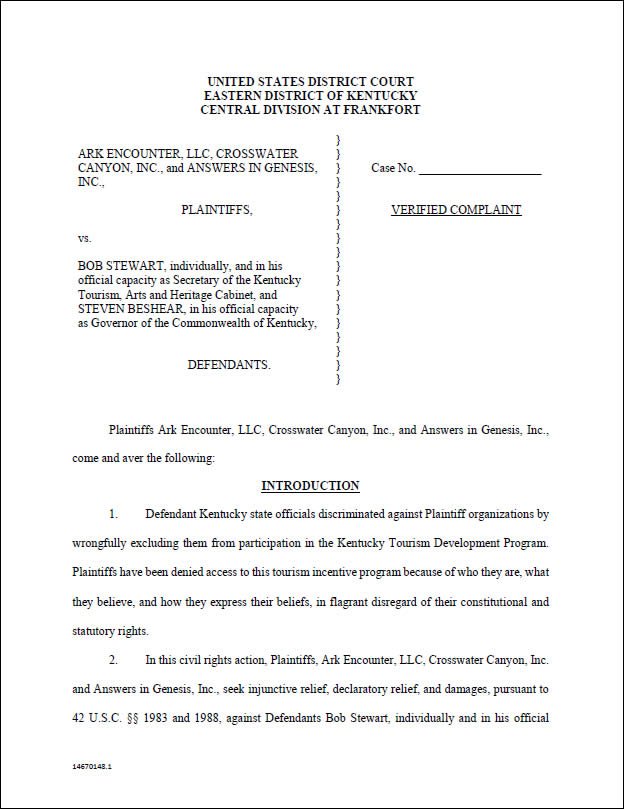 PETERSBURG, Ky., February 5, 2015 – Answers in Genesis (AiG), developer of the Ark Encounter theme park in Williamstown, Kentucky, filed a federal lawsuit today against Kentucky state officials for denying the park participation in the state’s incentive program to receive a future sales tax rebate. The suit asserts that the state’s action has violated a number of constitutional and statutory provisions under federal and state law.

Although the sales tax rebate program is available equally to all qualifying tourist attractions seeking to build in the state, AiG President Ken Ham observed that “AiG’s application was rejected solely because of our religious identity and the biblical messages we will present at our future life-size Noah’s Ark.” Ham also noted that AIG’s “lawsuit details how this action by Kentucky officials, including Gov. Steve Beshear [named as a defendant], violates federal and state law and undermines our constitutionally guaranteed religious freedom. It amounts to unlawful viewpoint discrimination against our Christian faith.”

The suit specifically alleges that state officials discriminated against AiG and the Ark project “by wrongfully excluding them from participation in the Kentucky Tourism Development Program. Plaintiffs are denied access to this tourism incentive program because of who they are, what they believe, and how they express their beliefs, in flagrant disregard of their constitutional and statutory rights." AiG points out that its lawsuit was filed a few hours after President Barack Obama spoke at the National Prayer Breakfast, where he declared that America must “constantly reaffirm that fundamental freedom: freedom of religion . . . and to do so free of persecution, and fear, and discrimination.” In addition, this afternoon the U.S. Court of Appeals for the 6th Circuit just released an opinion (in Conlon v. InterVarsity Christian Fellowship) reaffirming that faith-based groups have an essential constitutional right to make employment decisions consistent with their religious beliefs.

In the suit, AiG requests, in part, that the court “render a Declaratory Judgment declaring that the policy and practice of prohibiting religious organizations and/or organizations that wish to express religious viewpoints through personnel and messaging from participating in the KTD tourism incentives program violates the U.S. Constitution, the Kentucky Constitution and KRS §446.350."

A copy of the lawsuit, a video explaining the background and necessity of today’s filing, and a dispelling of the myth that state taxpayer money is helping to build the Ark, can be found at AnswersForFreedom.org. The video can also be viewed here:

The video features AiG president Ken Ham and constitutional law attorney Mike Johnson. Johnson is the chief counsel of Freedom Guard, and is serving as co-counsel in the case with attorneys for the Center for Religious Expression and local counsel, Taft Stettinius & Hollister, LLP. The video also shows clips of a 2010 Ark Encounter press conference, at which Gov. Beshear originally expressed his enthusiastic support for the Ark project.

After Kentucky granted preliminary approval in 2014 for AiG to receive a rebate of some of the new state sales taxes the Ark will generate after it opens in 2016, secularist organizations exerted tremendous pressure on state officials to rescind the approval. Anti-Christian groups objected to AiG’s statutory right to utilize a religious preference in its hiring practices (although such is expressly allowed by federal and state laws), and to the content of the messages that will be presented at the Bible-themed park. Bowing to this pressure, Gov. Beshear and other state officials announced a reversal on December 10, 2014.

In the video, Johnson explains the well-established legal principles supporting AiG’s case, and why these principles are so important to defend. He and AiG note that all Americans should be concerned with such government abuse, regardless of their individual perspectives on the book of Genesis. When such an unconstitutional state action goes unchallenged, it sets a dangerous precedent for all other religious and minority groups.

Freedom Guard and the Center for Religious Expression, both non-profit, public interest law firms, are providing their legal services at no charge to AiG.

The lawsuit has been filed in the United States District for the Eastern District of Kentucky, Central Division at Frankfort.

More information and videos on the lawsuit can be found at AnswersForFreedom.org. To follow the exciting progress of the Ark’s construction in Williamstown, go to ArkEncounter.com.