Freedom from Religion Foundation—Against the Constitution! 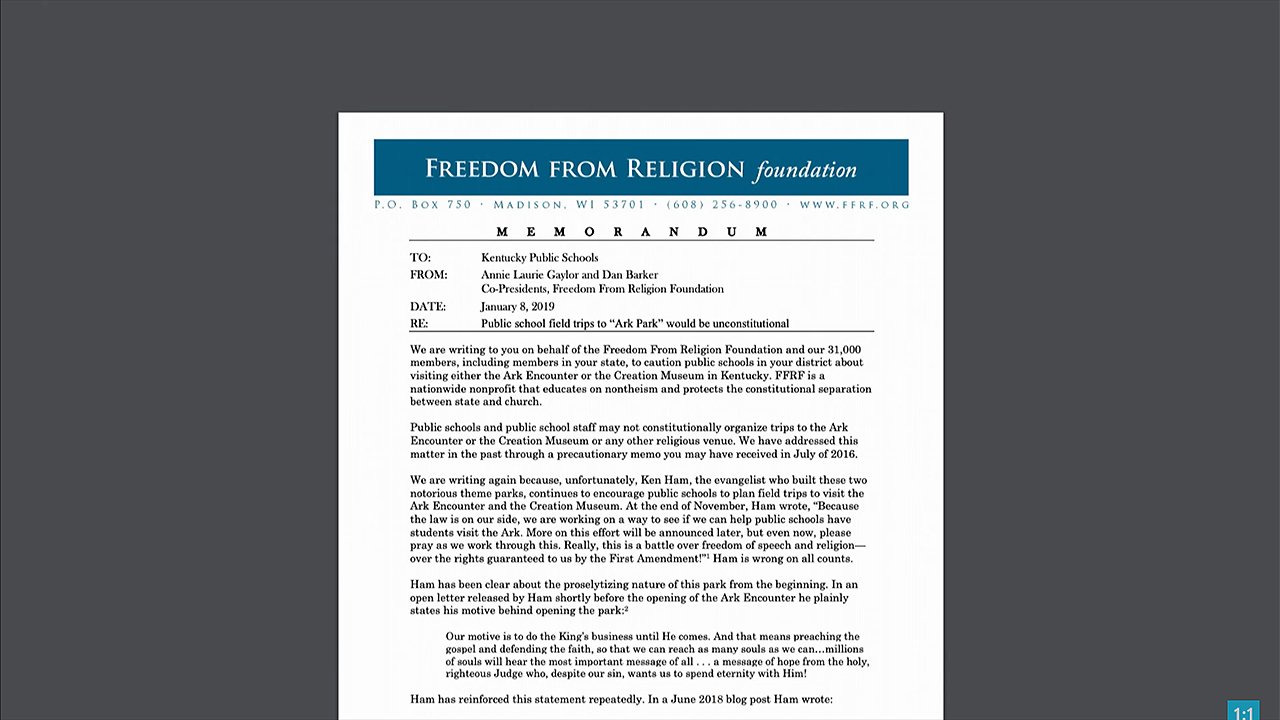 Our thanks to attorney Nate Kellum of the Center for Religious Expression for this legal opinion and response to the latest attack by the Freedom from Religion Foundation on the freedom of religion in America. (See my previous article for details on FFRF’s threatening letter sent to public schools in Kentucky and beyond to stop classes from visiting our Christian attractions). A highly respected religious freedom attorney, Mr. Kellum is sending the following legal memo to the superintendents of Kentucky’s public schools.

Re: Freedom From Religion Foundation’s Attack on the Creation Museum and Ark Encounter

By way of introduction, the Center for Religious Expression (CRE) is a non-profit public interest law firm that focuses on First Amendment rights and we regularly work with public officials and administrators to ensure those rights are properly understood and respected.

It has come to our attention that the public school systems in Kentucky and other states have received a threatening letter from the Freedom From Religion Foundation (FFRF) pre-emptively demanding that all schools refrain from organizing field trips to the Creation Museum and the Ark Encounter. FFRF claims the schools would commit a constitutional violation in visiting these attractions due to the religious motivations of CEO Ken Ham.

This type of meritless contention is oft asserted by FFRF. They frequently resort to fearmongering to coerce schools into conformity with their hostile views toward religion. Their unabashed goal is to exclude religious persons and entities from public life and view. But, as usual, FFRF’s arguments hold no legal weight.

We have thoroughly reviewed the situation and can state unequivocally that mere organization of a field trip to facilities owned by a religious organization is constitutional. Indeed, such drastic action in promulgating a blanket prohibition on field trips to anything with a religious connotation would encroach on the constitutional rights of the students, depriving them of opportunity to experience, engage with, and even challenge, other perspectives.

In their letter, FFRF does no more than recite broad platitudes of Establishment Clause jurisprudence. Notably, it fails to cite a single case indicating that a field trip to a religious facility is unconstitutional. The Supreme Court has repeatedly recognized that such an “absolutist approach” to the Establishment Clause, like that FFRF seeks, is undue. See Lynch v. Donnelly, 465 U.S. 668, 678 (1984).

In Lynch, the Court noted that it has only invalidated government action under the Establishment Clause when there is “no question” that such action “was motivated wholly by religious considerations,” and not secular ones. Id. at 680. Indisputably, introducing students to other perspectives about science and history outside the context of the classroom are valid secular objectives. Though FFRF warns that public schools have no business “promoting” religion, exposing students to different perspectives—even religious ones—is a far cry from promoting them. Your choice of which museums to visit during field trips is well within the protection of the First Amendment and your discretion as educators.

The only case FFRF cites regarding school events at religious facilities is Doe ex rel. Doe v. Elmbrook Sch. Dist., 687 F.3d 840 (7th Cir. 2012). Critically, the court in that case was careful to emphasize the narrowness of its ruling. Id. at 843–44. That case dealt with a public school graduation held in a church sanctuary where banners of the school and religious iconography intermingled. Id. at 850, 852–53. Taking the importance of a public school graduation ceremony together with the intermingled décor, the court found impermissible religious endorsement. Id. at 843–44, 850, 853.

Yet, in the same breath, the court declined to adopt the approach FFRF broadly pursues in its letters, acknowledging that schools may properly make use of facilities owned by religious organizations. Id. at 843–44. The court noted that “provid[ing] public school students with knowledge of Christian tenets [is] an obviously permissible aim of a broader curriculum.” Id. at 851.

Taking students on a field trip to the Creation Museum and the Ark Encounter to learn about other scientific and historical perspectives is plainly an appropriate context for visiting these facilities, regardless of the religious beliefs or motivations of the owners. We staunchly support your right to visit these attractions if you so choose and encourage you to do so.

Watch the entire episode of Answers News for January 10, 2019.