Footless footwear on the ocean floor, in assorted sizes and designer colors, supposedly offers clues about how we evolved our inner parts.

Resembling a discarded purple sock, Xenoturbella has baffled scientists since its early 20th century discovery on the seafloor off the coast of Sweden.1 Its classification among the many creatures in the animal kingdom has shifted like the tides as each new bit of information about it has surfaced. Furthermore, Xenoturbella’s proper placement on the tree of life has long been a matter of debate among evolutionists. Now, analysis of four newly discovered species from the Pacific Basin has refined its taxonomic position and led evolutionists to declare with confidence that Xenoturbella can help us learn how animals and humans evolved their internal organs.

With no brain and no intestinal tract or other organs, Xenoturbella was initially thought to be a sort of flatworm. Like us, it is bilaterally symmetrical, but it has only a single opening through which food enters and later returns. Flatworms, such as tapeworms, flukes, and planaria, likewise only have one gut opening. But then a DNA analysis revealed Xenoturbella had mollusk DNA, so scientists thought perhaps it was a mollusk that had lost a lot of features. Later, scientists realized that Xenoturbella probably eats mollusks, illustrating an amusing problem with the aphorism “You are what you eat” and removing Xenoturbella from the mollusk part of the animal kingdom. Some thought the animal was somehow related to acorn worms or perhaps sea urchins and starfish, but its lack of gill slits casts a shadow on that possibility. Many evolutionists wondered whether Xenoturbella was a de-evolved, super-simplified descendant of a more complex creature, maybe the descendant of a “deuterostome” that had originally had a digestive tract with two openings. That was one of the leading thoughts on the matter until the authors of the recent genomic study concluded that Xenoturbella has probably always been as simple as it appears. 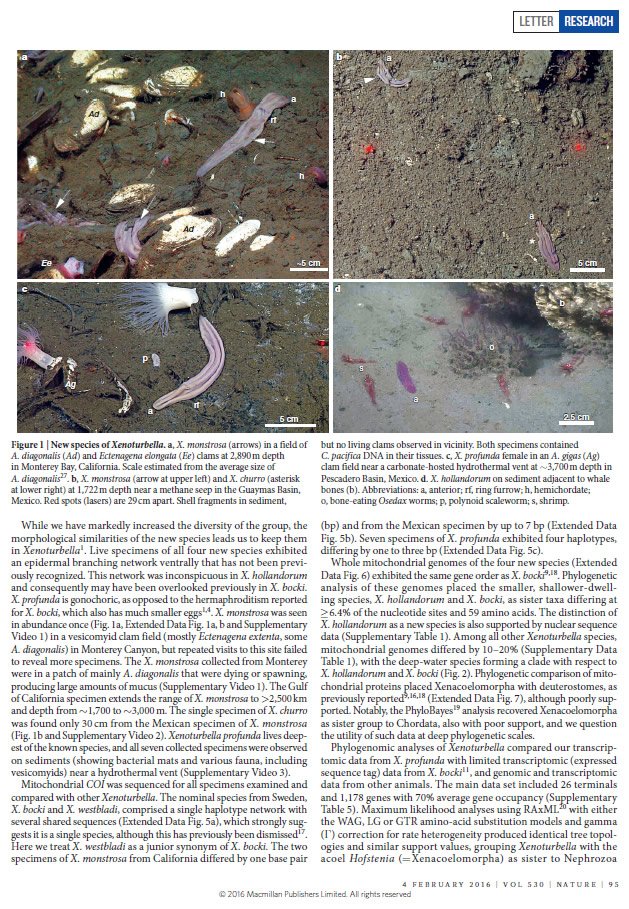 These are photos of the four newly discovered species of Xenoturbella published in Nature by Greg Rouse of the Scripps Oceanographic Institute. Rouse and colleagues found them in the Pacific Basin and confirmed they are the same species as those found a hundred years ago off the coast of Sweden. Image is a screen shot from G. Rouse et al., “New Deep-Sea Species of Xenoturbella and the Position of Xenocoelomorpha,” Nature 530 (February 4, 2016): 95, doi:10.1038/nature16545.

Ranging in color from pale pink to purple, orange, and bright pink, this gutless wonder has no excretory system, no gonads, and only a diffuse scattering of nerves. In short, it has almost no internal anatomical structures at all, making it even simpler than flatworms. Like many invertebrates, Xenoturbella does have a sac-like statocyst, a balance receptor containing flagellated cells and a little stone-like structure that bumps the flagellae when the animal changes its position, functioning much like the simple level from your toolbox.

Xenoturbella have been found in water of varying depths. The known species range in size from about 1.5 to 8 inches in length. Each has an oval or diamond-shaped mouth on its underside. No one has ever seen Xenoturbella eat, and because it doesn’t have teeth or scraping mouthparts or even a suctioning proboscis, scientists aren’t sure how it eats. When scientists cut them open, they don’t find any mollusk bits inside. But the earlier DNA analysis and Xenoturbella’s frequent association with clam beds, whether near a cold seep, a hydrothermal vent, or an undersea whale carcass, have led to the thought that Xenoturbella probably preys on mollusks.

Where Did They Come From?

Having learned more about just what these little deflated balloons on the sea bottom are, or at least what they are not, evolutionary scientists want to figure out how they evolved. Have they descended from much more complex animals through a sort of devolution? Or could they perhaps—not having any internal organs of their own—teach us something about how our internal organs evolved?

Through mitochondrial DNA analysis, all known Xenoturbella have indeed been confirmed to be diverse species of the same kind of organism with minimal genetic differences.2 Furthermore, after comparing nearly 1,200 mitochondrial genes to those of other sorts of invertebrates, the researchers confirmed that Xenoturbella harbored no unused genetic information like that used to blueprint organs it doesn’t have. If they had found such unexpressed information for organs, as evolutionists they would have viewed it as genetic leftovers linking Xenoturbella to a more complex past—to a different kind of more anatomically complex ancestral animal. Genetic information is often lost or damaged over time, but only within varieties of a particular kind of animal. Thus, even if unexpressed genetic information encoding organs had been found, it would not have been evidence for the upward—or downward—evolution of one kind of animal into another one.

Having found that this animal has a genome as simple as its anatomy, evolutionists are now satisfied that Xenoturbella belongs at the bottom of the evolutionary tree of life. Nerida Wilson of the Western Australian Museum says, “What we’ve shown is that, no, they probably always were simple. So our little guys are simple because they are one of the early branches of the tree of life.”3 Evolutionists believe Xenoturbella’s ancestors, instead of being the de-evolved descendant of complex animals, were among the earliest animals to branch off from the lineage we supposedly share with all animals that have a bilaterally symmetrical body plan.

The findings have implications for how we understand animal evolution.

“The findings have implications for how we understand animal evolution," says lead author Greg Rouse of the Scripps Institution of Oceanography. “By placing Xenoturbella properly in the tree of life we can better understand early animal evolution.”4 Wilson adds, “We're always striving to understand how life evolves, it's that classic burning question. We want to understand ourselves and our place in that diversity.”5

In trying to determine what other kinds of animals Xenoturbella was evolutionarily related to, the authors found that Xenoturbella had significant genetic similarities to animals from several different categories—acorn worms, sea urchins, a kind of mollusk, and a tunicate.6 Because these similarities span several “branches” of what evolutionists presume is a tree of life depicting the branching of life as it evolved, the authors conclude that Xenoturbella branched off early. However, many very different organisms share similar genes as a result of their origin from a common Designer.

Our Place in That Diversity

Discovery of multiple species of these sock-like sea-worms, in assorted sizes and colors at varying depths, revealed that Xenoturbella are, like so many other creatures, a diverse lot with varieties suited to sundry habitats, though likely all having the same feeding habits. The study of these interesting animals has shown that they have little in the way of anatomical equipment, but evidently they have all they need. But has genomic analysis shown that they were an early branching member of primitive creatures with the same basic bilateral body plan that was supposedly handed down to us? No! And can study of them reveal how animal organ systems evolved? Not at all!

Genomic and anatomical analysis and comparison with other organisms can help scientists classify Xenoturbella by revealing what it is, what it resembles, and how it differs from other animals. However, such comparisons do not reveal how any creature, including this one, can acquire the genetic information to evolve into a completely different kind of creature. Neither can application of the scientific method to an organism that lacks internal organs reveal how creatures with organs evolved. Such claims and hopes are rooted in an evolutionary worldview of wishful thinking about historical origins, not observational science.

Evolutionary claims are not supported by experimental biology.

And while evolutionary claims are not supported by experimental biology, the historical account of our origins in the Bible—God’s Word—is consistent with what we see in the world God made. From Genesis we learn that God created all kinds of animals to reproduce after their kinds, and while most diversify like these sock-like worms have, they only vary within their created kinds. Xenoturbella are alive and well in seas of both hemispheres, able to sense and consume what they need to survive. Evolutionary biology cannot explain how even these fairly simple multicellular creatures or their basic balance sensor evolved, but from Genesis we understand that God designed them with all they need for their niche in life. What an amazing animal! This author, for one, looks forward to the day scientists finally figure out how the thing actually eats.

If scientists wish to scientifically understand our place in this diversity, they should confine their conclusions to comparisons of creatures and descriptions of the diverse living things that populate this world. Certainly an appreciation for natural selection, observable as organisms interact with each other and their ecosystems, helps us understand the diversity we see in the world. But if scientists wish to understand the origin of all living things—Xenoturbella and Xenops (a bird) and xenophobes (people who fear strangers) and everyone else—they should look not to the untenable claims of evolution but to a reliable and scientifically consistent source of the history of our unobservable past, the eyewitness account in the Word of the Creator God. And to understand their own place in God’s world, they should first notice that God declared that people—and only people—are created in the image of God. Then they should realize that people are all rebellious sinners that God nevertheless loves—so much that He sent His Son Jesus as the Savior of the world. God has given us the intelligence to make observations and learn more about the amazing world He made, but God has already clearly defined our place in this diversity.

Previous Article Is Your Allergy-Prone Immune System the Result of Neanderthal Influence? Next Article How Did Plate Tectonics Get Started on Earth?