Ancient microfossils have supposedly solved the evolutionary enigma of the Cambrian Explosion.

Have Ancient Microfossils Solved the Evolutionary Enigma of the Cambrian Explosion?

Are Megasphaera microfossils ancient embryos? Encysted protozoans1 or giant bacteria?2 Algae? Or are they extinct animals? Evolutionary scientists still aren’t sure just what these tiny fossils are. But they are confident of one thing: Megasphaera are the 600-million-year-old evolutionary ancestors that will solve the enigma of the Cambrian Explosion. 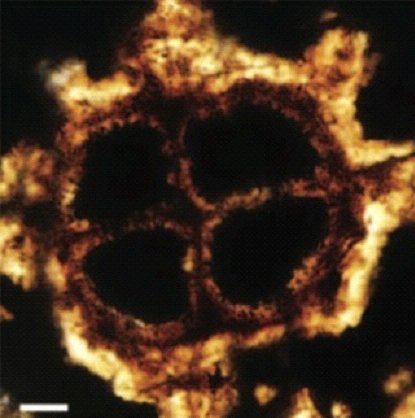 This is a close-up of an apparently early developmental stage in the life cycle of Megasphaera. Four cells are tightly packed into this envelope. Some envelopes contain one or two cells, and some contain many. These resemble early embryos of multicellular organisms, though whether plant or animal remains uncertain at this point. Many of these envelopes, adorned with conical or rounded bumps, are packed into spherical microfossils only 0.03 inches in diameter. Scale bar = 10 micrometers. Image: Figure 2(h) in L. Chen et al., “Cell differentiation and germ-soma separation in Ediacaran animal embryo-like fossils,” Nature (2014), doi:10.1038/nature13766.

Slicing through a new batch of Megasphaera microfossils, a team of scientists from Virginia Tech and the Chinese Academy of Sciences has found the fossils represent several stages in the life cycle of a multicellular organism. Measuring just 0.03 inches (0.7 mm) across, these small spherical fossils come from South China’s Ediacaran Doushantuo Formation, supposedly “60 million years deeper” in the geologic column than the Cambrian Explosion.

The identity of Megasphaera microfossils has long been a mystery. Some have argued they were giant bacteria or unicellular protozoans sheltering from harsh conditions within cysts. Others have proposed they were animal embryos because they resemble an early embryonic stage in which the embryo consists of a ball of cells. The problem with that idea was that no fossilized parent animals had been found to go with the “embryos.”3 The current research may have answered that concern.

Researchers still aren’t sure whether Megasphaera are plants or animals, but they at least have ruled out the possibility they are single-celled organisms. The Megasphaera microfossils they examined were spherical clusters of discrete, thick envelopes ornamented with round bumps and conical protuberances. Each envelope holds one, two, four, or more cells, resembling those seen in early embryos.4 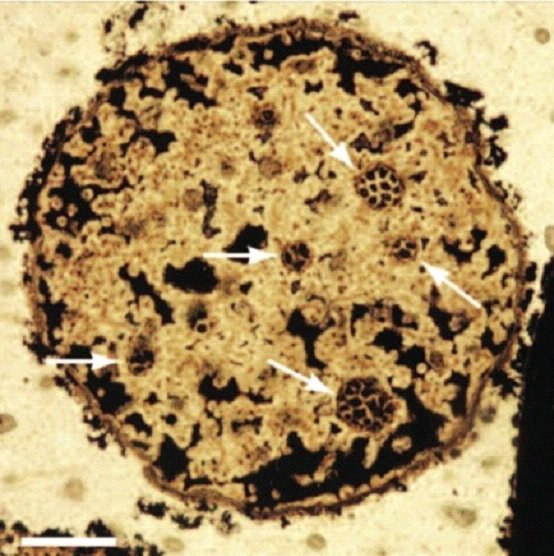 In this Megasphaera microfossil, the arrows point to five matryoshka-like nests of cells, named for their organizational resemblance to Russian nesting dolls. Within each of these envelopes are tightly packed, apparently organized groups of differentiated cells. Scale bar = 100 micrometers. Image: Figure 3(a) in L. Chen et al., “Cell differentiation and germ-soma separation in Ediacaran animal embryo-like fossils,” Nature (2014) doi:10.1038/nature13766.

Some larger envelopes of varying sizes contained a lot of tightly packed cells arranged in nests and layers of similar cells, so the scientists named them after Russian nesting dolls, matryoshkas. The cells in these matryoshka-stage envelopes seemed precisely arranged and grouped according to shape, suggesting they had adhered to each other in life. The variety of cell shapes and layered arrangements suggest these cells were differentiated for particular functions. The scientists suspect some were body (somatic) cells and some were reproductive (germ) cells.

“That is a telling sign of the complexity of multicellular organisms that you don’t find in bacteria or protists,” explains Virginia Tech geobiologist Shuhai Xiao, coauthor of the study published in Nature. And because the cells were tightly packed into their envelopes (matryoshkas varying from 30 to 350 micrometers in diameter), they infer that programmed cell death kept the cell numbers in each envelope in check.

Modern Marvel in the Evolutionary Past

While Megasphaera is not a perfect match for any modern organism’s developmental stages, there is a “striking similarity between the matryoshkas” and asexual reproductive stages in the modern flagellated green alga Volvox. There is no resemblance to any known unicellular organism. The scientists describe similarities in the way the apparent rapid cell division produces a series of embryos like that seen in Volvox as well as a Volvox-like arrangement of differentiated cells in the matryoshkas. Volvox, like other multicellular organisms, uses programmed cellular death to get rid of cells that have completed their developmental purpose, and the scientists believe Megasphaera also had evolved this “advanced” capability.

The scientists believe it unlikely that Megasphaera are Volvox-like algae however. There are profound differences between the two. For instance, the embryo-like cell divisions do not occur in the matryoshka-stage structures as they do in Volvox. Furthermore, the thick envelopes and tight cellular arrangement in Megasphaera seem to preclude the possibility of them possessing flagellae or efficiently performing photosynthesis. Therefore the researchers are leaning toward calling Megasphaera an animal, though no known modern animal has a matryoshka-like stage in its development.

“We will have to be open-minded in terms of what can be expected,” says Shuhai Xiao, a geobiologist at Virginia Tech. “From the living animal point of view, we only have a certain morphology to go with. But there are extinct animals or even offshoots of the lineages leading to animals that could be rather different from what we know as animals living today.”

Could this be because Megasphaera represents an early stage in the evolution of animal life, they wonder? “The bottom line is that they are multicelled and that they have cellular differentiation and that they have separation of reproductive cells from sterile somatic cells,” explains Virginia Tech geobiologist Shuhai Xiao. “This is a big thing, because if you look at modern multicellular organisms, including animals, this is a critical step towards very complex multicellular organisms.” Convinced Megasphaera is a transitional form, Xiao says, “The real value of these fossils is that we now have some direct evidence about how this transition from single-celled organisms to things like animals and plants occurred in the evolutionary past.”

Observable science thus shows that Microsphaera fossils are consistent with the developmental stages in the life cycle of some sort of extinct multicellular plant or animal. However, the evolutionary scientists who made these observations have leaped to the conclusion that Microsphaera is a missing link between single- and multicellular life. They have thus made a worldview-based interpretation of the observable facts. They want to place these organisms in their proper evolutionary place, and such a transition is sorely needed. Therefore, these Ediacaran Megasphaera microfossils seem to answer the evolutionary problem of not having ancestors for the myriad of complex Cambrian life forms.

Since Darwin’s day evolutionists have struggled to explain how the diverse collection of complex animals appeared in the Cambrian fossil record without a host of corresponding but much simpler animals deeper down.

But these and other interesting complex organisms discovered in Ediacaran rock do not solve that evolutionary mystery. These may be lovely snapshots of the stages in a multicellular organism’s life cycle. They, like other Ediacaran fossils, are evidence that multicellular animals displaying “advanced” cellular differentiation lived in habitats entombed in Ediacaran sediment. It is notable that the developmental events chronicled therein are quite analogous to the stages seen in the life cycles of modern multicellular organisms. The fact that the organism cannot be matched to a particular modern species simply means the organism is now likely extinct, not that it is a transitional form. Furthermore, other Ediacaran creatures also exhibit “advanced” features such as muscles and a variety of body plans. Since Darwin’s day evolutionists have struggled to explain how the diverse collection of complex animals appeared in the Cambrian fossil record without a host of corresponding but much simpler animals deeper down representing their evolutionary ancestors. Ediacaran rock dated even earlier than the Cambrian has its share of complex well-preserved animals, again without simple evolutionary antecedents in the fossil record.

To suppose that the complex organisms in Ediacaran rock provide the missing links for Cambrian complexity makes no sense, for they do not lack differentiation or show any actual transitions from simplicity to complexity. The latest observations concerning Megasphaera suggest they were multicellular life-forms with the same sort of complexity seen in modern organisms. Megasphaera microfossils have not shown how molecules-to-man evolution soared over the chasm from single- to multicellular life. Rather, their excellent preservation deep in the fossil record is a testimony to their sudden catastrophic burial at the beginning of the global Flood described in Genesis, accompanied by chemical processes in the sediments that preserved them for us to see them today, about 4,350 years later.

Previous Paper Review of the Lecture “Evolution & Creation: Conflicting or Compatible?” Next Article Did Mammals Evolve to Rule the Night?